EE has today announced the U.K.’s first 4G pay-as-you-go plans, as well as its “most affordable” pay monthly 4G packages as it looks to step up its fight against competing 4G services from O2 and Vodafone. They go live on October 30, and they promise to provide Brits with cheaper and easier access to the 4G revolution.

EE was first to launch 4G in the U.K. last October, and it now serves 117 towns and cities — over 60% of the population. The problem is, most consumers are happy with 3G, and they’re not willing to pay a premium for faster download speeds. But the carrier is hoping to change that by making 4G more affordable, an easier to obtain.

“One year after launch, we’ve extended the world’s fastest network across 60% of the United Kingdom. But we want to bring the power of 4GEE to even more people,” said EE CEO Olaf Swantee. “That’s why this month we are launching new plans for light users, super users, regular users, data sharers and Britain’s mobile workforce up and down the country.”

“Whether they want the flexibility of pay as you go, the UK’s most affordable monthly plans, or to make the most from their smartphone with the world’s fastest speeds and biggest data bundles, EE is the number one 4G network.”

If you don’t mind entering into a contract, you’ll be able to sign up to one of EE’s cheaper pay monthly handset packages, which will start at just £18.99 ($30.41) per month. For that you get 1,000 minutes, unlimited texts, and 500MB of data. The rest of EE’s 4G plans are shown in the table below. 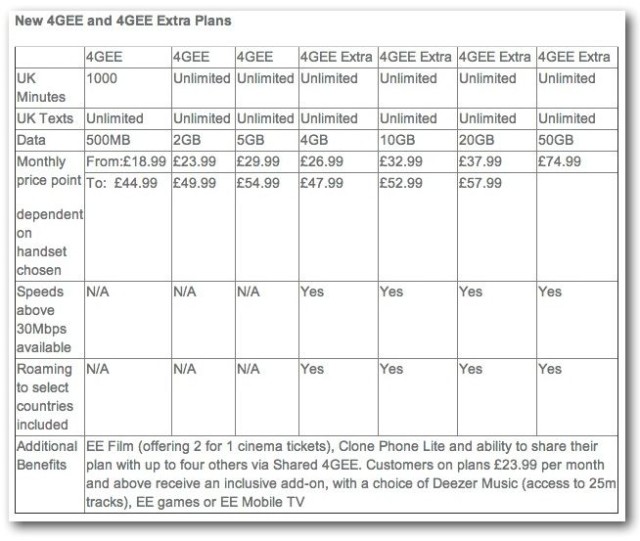 If you don’t want to commit to a new two-year contract, you can now get 4G on pay-as-you-go. All of EE’s 4G handsets that are currently available to pay monthly customers will also be available to pay-as-you-go customers, and there are a range of 30-day bundles available, with 10oMB to 10GB of data included. 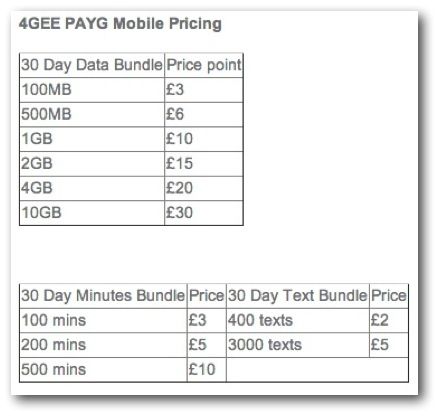 Every customer who buys a 4G handset from an EE store will get 10GB of mobile data free as a one-off, and until January 2014, EE’s Christmas promotion will see customers given 2,014 minutes to use as they wish throughout the whole of 2014.

EE also announced new mobile and home broadband plans today, which will also be available from October 30. For more information, follow the source link below.