When I first tested the BlueAnt Q3 headset, paired with my iPhone 5, I was surprised by how poorly it performed. I couldn’t get over how bad the audio quality was, and I was surprised a top-notch company like BlueAnt could release such a dud. Investigating further, I decided to snoop around online to see what others were saying, but it I wasn’t alone, other iOS users we experiencing similar issues.

With that in mind, I had no choice but warn readers, and rate the Q3 poorly.

But here, the story begins anew. After filing my review, several readers, and BlueAnt themselves, alerted me that the real problem has to do with the problematic ways Apple implements Bluetooth, and BlueAnt assured me a simple Q3 firmware update would absolve any audio issues I may have had. Fair enough, I thought, after all, this wasn’t the first time I had experienced subpar audio with Bluetooth headsets that, when used with non-Apple devices, seemed to function sublimely.

I’ve now tested a brand new fully-updated Q3, and I’m happy to report that it has indeed solved many of the Q3’s initial audio faux pas. BlueAnt, to their credit, has now earned at least some reprieve, as the Q3 is now bringing both fists to the fight.

Well, it’s a Bluetooth headset. That means about what you think it means: handsfree calling; A2DP streaming audio from your iOS device to your ear; voice commands. 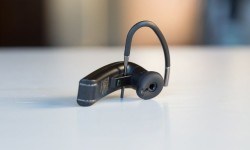 Teardrop eartip and solid earhook make the Q3 as cozy as they come.

Wideband audio means your audio should sound better via the Q3’s speaker, though that’s a feature all major headsets include these days.

BlueAnt also built independent voice controls into the Q3 that perform certain functions, like answering or ignoring phone calls, or reading you battery levels. When used with an iPhone,these seem redundant to me since it’s another set of commands you’ll have to remember, but it does give the Q3 some versatility since not all phones have the intelligence of Siri baked in.

Premium comfort niceties are also included in the box, such as various ear tips and a very nice ear hook to keep the Q3 hanging off even the tiniest of Will Smith ears.

Let’s keep going with comfort, since that’s what I noticed first when I put the Q3 on. This is how you do it folks. A metal ear hook to keep the Q3 hinged to your head; teardrop-shaped ear tips that feel great in the ear, and various extra tips to spare. I could wear the Q3 all day and hardly notice.

It’s amazing what a little bit of firmware can do to improve audio quality. With BlueAnt’s new software running the Q3, my callers could actually hear my eloquent words and finely crafted metaphors, and as you would expect from a $100 headset, they reported that the audio they were hearing sounded quite good.

Gone are the wild blasts of static and shrieks of prehistoric animals that were prevalent in my previous Q3 unit. No, this model, with its updated firmware, behaved quite nicely.

Noise cancellation also performed well in light winds, but in brisk breezes my callers would complain they could hear it. You’re also not going to want to do the dishes or have other loud background noises about while on Q3 calls; my callers could hear those too, and complained those audio intrusions were very loud.

Audio to my ear was also markedly improved post update, with my callers sounding clear, balanced, and easy to understand, though I would say still a tad tinnier and sometimes harsher than my current favorite headset, the Plantronics Voyager Legend UC.

Where the Q3 really wins the race, though, is in comfort. The Voyager Legend won’t stay in my ear. No, really, it constantly pops out. The Q3, on the other hand, is one of the most comfortable headsets I’ve ever used, and would probably stay put in gale force winds. Q3’s ear hook performs astutely at keeping the headset pressed against your face, and with its teardrop shaped earpiece, the Q3 sits in your ear like a king on his throne.

So, what’s the bottom line here? The Q3 is a superbly comfortable headset with good audio quality. I’d even go as far as saying it’s one of the best Bluetooth headsets currently on the market. But here’s what you need to know: if you have an iOS device, you may need to update the Q3’s firmware before use, and as of this writing, a firmware update can only be performed from a PC, though BlueAnt says a Mac version is coming.