The iPhone 5 vs. the Samsung Galaxy S4. Which screen is “better” is going to be subjective for most consumers, and largely limited to whether you like the S4s bigger display, or prefer a smaller phone like the iPhone 5. You might also prefer the Galaxy S4’s for its tendency to oversaturate reds and oranges (a side-effect of OLED), or the iPhone 5 for a more balanced color gamut.

But which is objectively the best in the eyes of display experts? Everyone’s favorite display guru Dr. Raymond Soneira has done one of his characteristic shoot-outs between the Samsung Galaxy S4 and iPhone 5, and surprise: there’s no clear winner. 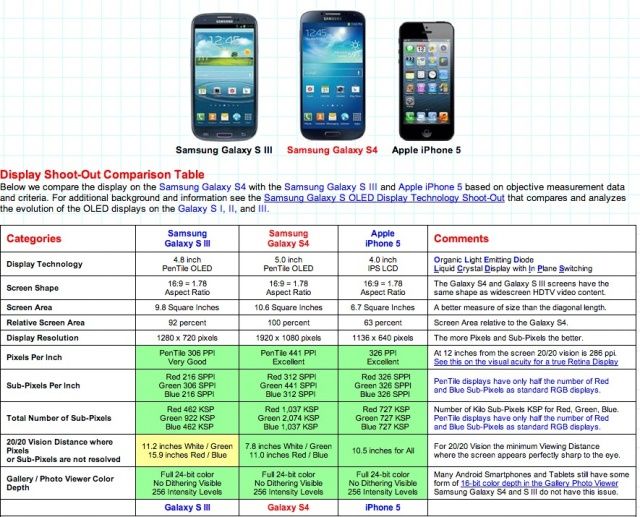 Running the S4 through its paces, this is Dr. Soneira’s takeaway:

The iPhone 5 is now more than half way through its product cycle, which is important to keep in mind for our comparison. However, high-end LCDs like the iPhone 5 are a very mature and refined display technology, so other than screen size, resolution, and the Pixels Per Inch not much is likely to change in the next generation, no matter what Apple decides to do. The iPhone 5 is significantly brighter than the Galaxy S4, particularly for screens with mostly peak white backgrounds. Its color calibration is a bit better, although the Galaxy S4 has a more accurate White. The Galaxy S4 has a much bigger screen, higher resolution, higher PPI, much darker blacks, and better screen uniformity than the iPhone 5. They each have their own particular strengths and weaknesses, but if you scan our color coordinated Comparison Table, both displays are quite good and comparable overall – so it’s currently a tie – we’ll see how they both evolve and improve in the next generation…

The main point Dr. Soneira is making here is that Samsung’s OLED technology is actually in a (relative) state of immaturity compared to the LCD technology Apple uses. That means that there’s still room for Samsung to improve its displays in metrics like white balance, color accuracy, and so on… while Apple’s pretty much topped out what it can do with LCDs. So the Galaxy S5 could theoretically come out ahead of the iPhone in the next generation.

Not that most people will ever notice. We’ve reached the point of diminishing returns when it comes to mobile display quality for most consumers: for most, the decision comes down to size these days, not appearance.