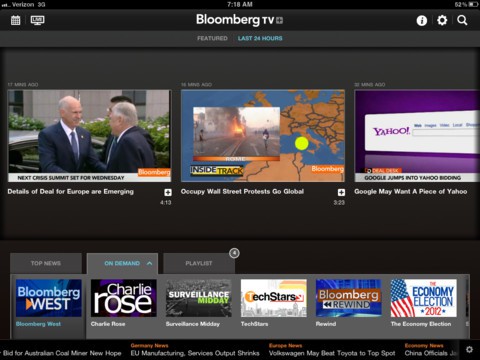 “Bloomberg Television is a 24-hour global business & financial news network that is watched by the most affluent and influential viewers in the world. It is supported by the world’s largest international news bureau network with 146 bureaus in 72 countries.”

Besides live TV, Bloomberg’s iPad app offers exclusive web content and interviews. You can see all of the important stories from the last 24 hours and many of the network’s critically acclaimed shows. Videos can be downloaded for offline viewing, and you can share content with friends on social networks like Twitter and Facebook. The app’s interface can also be customized to your liking.

Download Bloomberg TV+ for free in the App Store. 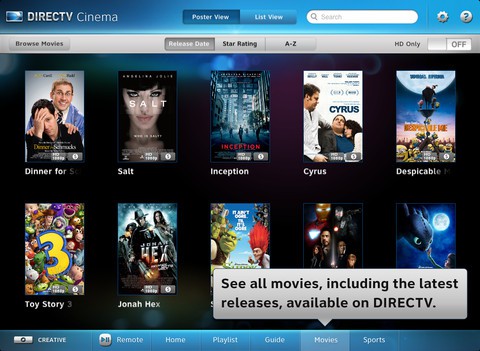 DirectTV launched a live TV solution on the iPad today for its satellite TV subscribers. The company’s iPad app has been updated with the following features:

– Quickly scroll through a list of channels available to watch on your iPad with a dedicated “Live TV Streaming” Module.
– Get tips in the help section to guide you through features in the app.
– Set parental controls to block live TV channels viewed on the iPad.
– Change start and end times to add padding to a program when setting a recording.

There are two catches to DirectTV’s new service. The first is that the iPad can only stream live TV when on the same home network as the customer’s DirectTV DVR. The second catch is that there will only be a few dozen channels available for streaming on the iPad initially. Hopefully DirectTV will continue to add channels.

DirectTV customers can download and use the iPad app for free in the App Store.