Apple appears to have re-introduced the full version of field test mode in iOS 4.3 Beta 3, which will allow you to quickly check the quality of your cellular signal by simply dialing: *3001#12345#* and pressing Call on your iPhone.

Under iOS 4.0 the field test vanished much to everyone’s dismay during Antennagate last year only to have a much simplified version reappear in iOS 4.1 that looked like this:

Once you enter Field Test the signal bars on your iPhone will be replaced by a number. The higher the numeric portion of the negative number gets the worse your signal is. For example, -100 is worse than -79.  If you tap on the displayed number the display toggles between displaying the number and the normal signal bars.

The original field test mode (pre-iOS 4.x) had a more robust set of features being reported, but signal strength was all you got in iOS 4.1. Now when you enter field test mode in iOS 4.3 Beta 3 you get this: 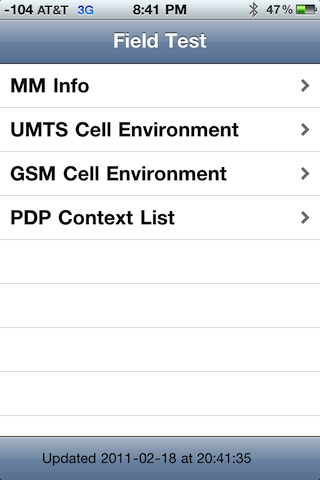 This is exactly what you would see within the Field Test app prior to iOS 4.x with the exception of the addition of the bar at the bottom that briefly reads connecting before displaying the text above (I don’t recall that being there previously).

If you are done testing simply press the Home button to return to your iPhone Home screen.

This is an interesting development considering the fact that Field Test Mode vanished in iOS 4.0 when it was released along with the iPhone 4 and the subsequent Antennagate scandal that rocked the Internet. Yet it returned, but only partially in iOS 4.1 — now it looks like it is back to full capability in iOS 4.3 Beta 3.

In addition to this discovery, Killian Bell, a co-worker of mine at Cult of Mac discovered something interesting regarding Field Test on his iPhone recently. According to him:

I was just performing a clear out of applications in my multitask bar on my iPhone, and I noticed one in there called ‘FieldTest’. This isn’t an application I’ve installed, and when I open it, it let’s me do some things I don’t understand.

He searched for it and found: 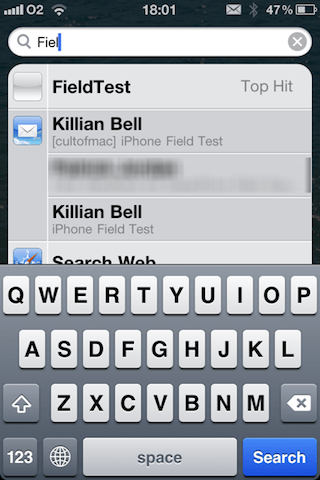 This search result seems to indicate that Killian had an app called FieldTest running on his iPhone (possibly related to testing a Jailbreak).  He also saw that app running in his task bar: 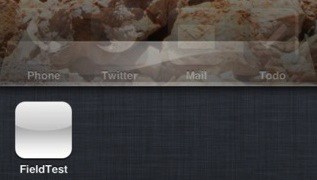 So far no one I know using an iPhone can recreate these circumstances that Killian found himself in and I don’t completely know how to interpret the Field Test screens either. However, I’m researching the topic.

If you or anyone else you know can decipher these field test screens please tell us all about what they mean by leaving a comment.