I’ve worked at a few desks that used Cisco VoIP phones (one in the Wired.com offices among them); but something like the new Invoxia NVX 610 iPhone-controlled conference phone may eventually turn conventional handsets — even VoIP ones — into relics.

END_OF_DOCUMENT_TOKEN_TO_BE_REPLACED 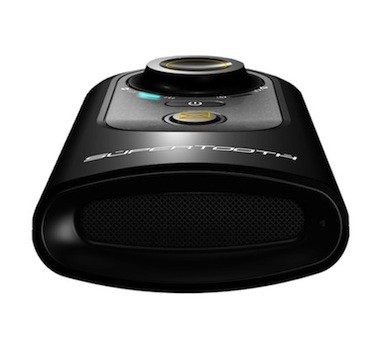 By now, seems to be pretty well accepted that texting while driving is even more dangerous than driving while intoxicated. SuperTooth, a French company behind a variety of Bluetooth gadgets, released a version of their hands-free Bluetooth speakerphone earlier this week at the CTIA mobile conference in Florida.

The SuperTooth HD is a more powerful version of the company’s other models, like the SuperTooth Voice, and features two speakers outputting a relatively powerful a 5 watts through a 5.4 watt amplifier (which SuperTooth says is three times as powerful as any other speakerphone out there). Pair that with dual mics, and you’ve got what sounds like a fairly formidable hands-free package.

The HD also has the same voice-control and text-to-speech features as some of the company’s earlier offerings, like answering calls, retrieving voicemail and composing Facebook, Twitter, e-mail and text messages. The SuperTooth HD will be available next month for $129.