Stop chewing your fingernails now. You may be biting off a new frontier in wearable technology.

Researchers at MIT have devised a way to turn the thumbnail into a wireless trackpad that will allow users to control their devices when their hands are full.

Imagine using the neighboring index finger, moving it across the thumbnail to help answer the phone while cooking, send a text message or toggle between symbol sets while texting.

END_OF_DOCUMENT_TOKEN_TO_BE_REPLACED

Apple is beefing up its Boston office, with an aim to expanding its Siri voice recognition team. Documents filed with local authorities show that the company has leased around 11,500 square feet of office space on the 13th floor of One Broadway, an office tower owned by MIT and located on the outer perimeter of the university’s campus in Cambridge, MA.

The added space gives Apple room to bring in an extra 65 people to work on the project, although a local job search for the area doesn’t yet show anything.

Apple has been steadily growing its Siri team over the past few years — recruiting employees formerly from companies like AT&T Research, Microsoft, Oak Ridge National Laboratory, BBN Technologies and others for its speech team in Cambridge.

END_OF_DOCUMENT_TOKEN_TO_BE_REPLACED

It was time for another Apple expert witness today, who said that consumers would be willing to pay $100 for three specific, patented features that are at issue in the high-profile, high-stakes court case against Samsung. John Hauser, called by Apple as an expert due to his role as a marketing professor at the Massachusetts Institute of Technology (MIT), said that in his internet survey, consumers were willing to pay this much more for features like scrolling or multitouch. The survey, Apple proposes, has relevance when calculating potential damages for Apple due to potential patent infringement. Apple is seeking over $2.5 billion from Samsung.

END_OF_DOCUMENT_TOKEN_TO_BE_REPLACED

Imagine that you could just point your iPhone’s camera at your baby and it would immediately tell you his vital signs: heartbeat and so on. Or that you could fire up an app and it could pick out tiny, invisible movements from what looks like a still video. Using a process called Eulerian Video Magnification, boffins at MIT are doing this already.

END_OF_DOCUMENT_TOKEN_TO_BE_REPLACED

You’ve seen Stephen Spielberg’s film, Minority Report, right? Tom Cruise’s character stands in front of virtual screens, puts on a pair of gloves, and manipulates the data and the memories without touching a thing. Well, the super brains at MIT’s media lab have taken the first step toward that reality, using Apple’s magical device as a display screen and a special glove/attachment combo to interact with it.

The video the group has released shows some pretty fancy stuff, drawing objects in 3D real time, and then manipulating them in collaboration with others. There’s even some slick Minority Report-style interface there, with researches moving red and blue rectangles around in the virtual space they’ve created on the iPad.

END_OF_DOCUMENT_TOKEN_TO_BE_REPLACED

If you’re fed up with all the “who copied who,” “this one’s suing this one” nonsense currently consuming the mobile ecosystem, MIT has the solution for you. Raise your Switzerland flag with an affordable wooden DIY cellphone kit. No one will mistake your 9-volt powered laser-cut plywood for an iDevice or Android so you won’t have to worry about any impending patent litigation. All kidding aside, this little do-it-yourself kit is only in the prototype phase and is a far cry from the smartphones we’re used to using.

END_OF_DOCUMENT_TOKEN_TO_BE_REPLACED

Here’s another way the iPhone is revolutionizing medicine — it’s now a cheap, portable tool for detecting cataracts, the leading cause of blindness worldwide.

Researchers at the Massachusetts Institute of Technology have developed Catra, a cheap plastic lens that clips onto the iPhone’s screen. Using a simple vision test, the Catra software creates a map of cloudy areas that may indicate the onset of cataracts.

The Catra software can provide a diagnosis within minutes and requires no training. It also works on the iPod touch and other smartphones. It’ll be a boon for use in developing nations, the researchers say.

Below is a video explaining how it works. Catra will be shown off at Siggraph in Vancouver next month.

END_OF_DOCUMENT_TOKEN_TO_BE_REPLACED

Richard DeVaul — an MIT PhD and Apple’s Senior Prototype Scientist working under Jonny Ives — has left Apple for Google. In him, Apple has lost one of their top, super secret skunkwork guys… one of the few in Cupertino tasked with building out hardware concepts for the next big thing.

END_OF_DOCUMENT_TOKEN_TO_BE_REPLACED

French software development company Visuamobile is planning to launch an iPhone app called  ELIZA AI, based on the 1966 artificial intelligence computer program trained to respond to questions like a therapist, that is by asking other questions.

Though the program is dated, Leca says the Eliza iPhone app still had the same effect that surprised creator Joseph Weizenbaum back at MIT in the day — at a certain point people forget  ELIZA is not  a human therapist. 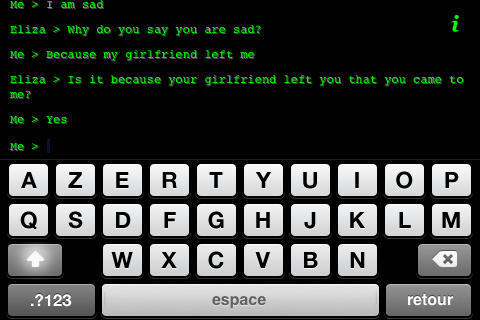 “What seemed really interesting, and I have tested it at the office, is that people are reluctant to show you what they have been discussing with Eliza,” Dominique Leca of  Visuamobile told Cult of Mac. Leca, who handles business development at the Paris-based company,  had the idea for the app. “And, to tell you the truth, Eliza has helped me several times. The fact that she constantly asks you to explain yourself is a great way to analyze what you think.”

Set to be released for free download on the visuamobile store on iTunes March 3, Leca said the Eliza app will likely remain gratis but the company has more sophisticated psyched-up apps in the works, like one based on AI chat robot ALICE, that will probably be fee-based.