The opening day crowds at Macworld 2011 are pretty healthy.

SAN FRANCISCO, MACWORLD 2011 — The corridors are crowded, the booths are hopping and the registration desk is doing brisk business.

Against expectations, Macworld 2011 is doing pretty well on opening day. Of course, there are a few caveats:

SAN FRANCISCO, MACWORLD 2011 — If there’s one thing we’re hearing over and over at Macworld this year, it’s the word “enterprise.” There’s a lot of companies getting ready for a huge wave of iOS deployments by enterprise in 2011.

One company ready to jump on the enterprise bandwagon is FileMaker, whose FileMaker Go iOS app allows FileMaker databases to run on the iPad or iPhone. That means businesses can make custom database apps — everything from email clients to iTunes clones — without going through Apple.

“A lot of people think they have to develop their own app to do something but its not necessarily necessary to do an app,” said FileMaker spokesman Kevin Mallon. “If you’ve got FileMaker Pro, you’ve got an app.”

According to FileMaker, its database software is currently the only way enterprise can get custom apps on the iPhone or iPad without coding a custom solution and submitting it through the App Store.

“You don’t have to be a serious programmer to do an app,” said Mallon. “It’s dead easy.”

The iPad is a lot heavier than it looks, isn’t it? Holding it with one hand can be unwieldy and make your hand tired, but holding it with two hands makes it hard to use.

Well we discovered a nifty little device that can help. It’s called the HandeHolder and it allows you to strap your iPad to your hand, making it much easier to hold and use.

END_OF_DOCUMENT_TOKEN_TO_BE_REPLACED

Business isn’t usually this cool, but who wouldn’t want this iPhone-dock-cum-desk-phone? Just plug in your iPhone, and it becomes your office phone.

Brand new at Macworld 2011, Altigen’s $169 iFusion Smartstation iPhone dock features a Bluetooth speakerphone and receiver that you can cradle under your chin, Don Draper style.

Paired with the company’s PBX app which provides eneterprise-level phone management features, it allows your iPhone to replace your office phone as well as your home phone. Bye bye landlines. 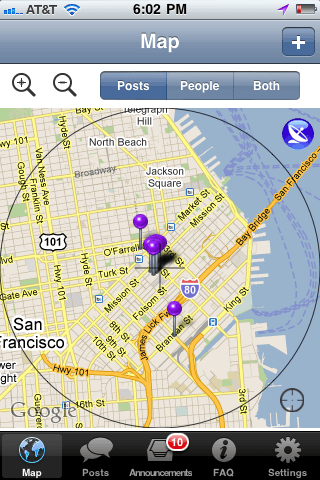 SAN FRANCISCO, MACWORLD 2011 — If you’re goin’ to San Francisco, flowers in your hair are always a nice touch but this week the iMacworld app on your Apple mobile device could win you $1000.

The free app, available on the iTunes App Store, will not only help you get around the giant Conference and Expo happening Thursday – Saturday at San Francisco’s sprawling Moscone West convention center, but it also has interesting tips and information valuable to locals and visitors alike.

Through a promotional tie-in to another free app called AskLocal — one lucky user is going to win $1000 in a cleverly designed Treasure hunt.

Familiarity with Ask Local will be an advantage to anyone hoping to win the prize, according to a message that greets visitors to the Community button on the iMacworld main page, so if you’re headed to Macworld, you’ve got more to learn about than you thought.

SAN FRANCISCO, MACWORLD 2011 — Despite the demise of the xServe, Apple products can be and are a good fit in the enterprise, according to John Welch of the Zimmerman Agency, who spoke on Apple in the Enterprise at the Macworld Industry Forum Wednesday at Macworld 2011.

First of all Apple is not an enterprise company — it is not Microsoft, not Cisco, not IBM.

But Apple doesn’t need to be an enterprise company to be a source of solid products that work well in the Enterprise, said Welch, who spoke from 20 years of experience deploying Apple products in business.

END_OF_DOCUMENT_TOKEN_TO_BE_REPLACED

SAN FRANCISCO, MACWORLD 2011 — Apple is perceived as closed and proprietary, but the company has been very generous to the open web, and that generosity has benefited Apple in turn, says pundit John Gruber.

Speaking at Macworld 2011’s opening Industry Forum, Gruber noted that most of the best browsers on the market today are based on Apple’s WebKit, an open source browser engine developed and supported by Apple.

Apple allows its competitors to base their browsers on Apple’s technology, including Google, Nokia and Palm. Indeed, Palm’s entire webOS is based on Apple’s Webkit.

Why does Apple do this?

Because an open web is beneficial to Apple. Ten years ago, most software vendors developed for Windows and Apple was locked out. Napster is a good example, Gruber said. Napster was built for Windows, and Apple users were was largely excluded until third-party Mac clients were build much later.

These days, software companies build for the open Web. Twitter and Facebook, for example, were built for the Web.

“When Windows was the baseline platform for the industry, Apple was left out,” Gruber said. “But these days, if companies develop for the Web, Apple is included.”

This wouldn’t have happened if Apple hadn’t supported and encouraged the web as a development environment, partly by giving Webkit away.

“Apple has benefited tremendously from the rise of the Web,” said Gruber. “And the Web has benefited from contributions from Apple.”

SAN FRANCISCO, MACWORLD 2011 –There’s no great secret to understanding what Apple has up its sleeves, according to Jason Snell, editor-in-chief of Macworld magazine, who spoke to attendees about “How Apple Does It” at the Macworld Conference and Expo Industry Forum Wednesday morning.

Anyone who makes a habit of keeping up with technology news understands one of the longest running games in the business involves predicting what Apple will do next.

Despite its reputation as an obsessively secret company that consistently produces products no one ever thought they needed until Steve Jobs invented them, Snell described Apple as a consistent, rational company that doesn’t do anything unexpected — and doesn’t rely on crazy mind control to achieve its success.

From the company’s very founding, the roles Jobs & his cofounder Steve Wozniak played suggested Apple’s future: Jobs understood marketing and Woz was technically brilliant at making complex technology work. One of them understood products and the other understood technology; the way they worked together would become Apple’s greatest strength and one day set their company apart from all others in American business.

END_OF_DOCUMENT_TOKEN_TO_BE_REPLACED

SAN FRANCISCO, MACWORLD 2011 — As one of the key architects of the original Macintosh, programming legend Bill Atkinson is in a good position to make sensible predictions about the future of tomorrow’s computer interfaces.

We’ll wear a tiny video-equipped earpiece that will see, hear and record everything we do. On the other end, in the cloud, will be a virtual personal assistant that will act as a cognitive prosthesis.

END_OF_DOCUMENT_TOKEN_TO_BE_REPLACED

SAN FRANCISCO, MACWORLD 2011 — When Apple discontinued the Xserve server last year, there was a huge outcry from the IT crowd.

But as one school in Hawaii has demonstrated, the Xserve platform is a dinosaur.