| Cult of Mac
Cult of Mac Mobile menu toggle
Mobile menu toggle
FULLSCREEN
Unlike Apple's newest Mac Pro, which looks like a trashcan, this replica 2013 Mac Pro is made out of an actual trash can. It even comes with a matching toilet brush.
Made by hacker JuanLobo, the replica is quite capable, boasting outputs for HDMI (three), USB, Ethernet, DVI and digital audio.
It was hard work getting all the components to fit inside the trashcan. The fan cooling the graphics card had to removed and flipped over. Another challenge was squeezing in the special power supply.
To make everything fit, JuanLobo created a 3D model of Mac Pro's base. "It provided another 30mm of space that was desperately needed," he wrote on the project description.
This is the $53 Lunar Waste Bin used to build the replica Mac Pro.
This is a water-cooled PowerMac G5. "I've always loved the style of the PowerMac G5 enclosure," wrote it's creator, MrAhlefeld.
"I've sourced a PowerMac G5 from a local MAC shop in my city," said MrAhlefeld. "It was dirt cheap, cause one of the handles on the to was bend out of shape."
"I will be using some of my old parts as I love my Eheim 1048 pump, just can't beat it at those noise levels," explained MrAhlefeld.
The coolant loop includes three beefy fans to dissipate heat. The original G5 ran so hot it had nine fans.
In September 2012, the HackinBeast was one of the fastest Macs on the planet with a whopping GeekBench score of 36,918.
Based on a pair of Intel Xeon X5690 CPUs, the machine’s total cost was $4,500. That’s less than half of an equivalent 2012 Mac Pro, which would have cost more than $10,000 and topped out with a Geeekbench score of 25,000.
Here's the beast's crazy cooling system. It's loaded with LIQ-702 Liquid Coolant (UV Green).
The HackinBeast's logo. “It took me from January 2012 to Sept 2012 (a total of 9 months); the same amount of time it takes to have a child,” wrote its maker, PunkNugget.
This is a mini G5, approximately half the size of the original. It was hacked down to size by prolific hacker neilhart. "This has been four months of 'fun' and I end up with a high performance machine that runs with the best," he wrote.
This Mac mini case has been updated with up-to-date components.
With a Star Wars aesthetic, the G4 Stormtrooper Haswell has been updated with a speedy 17 processor. Painting the case was a lot of work. "I sanded all the parts, applied a coat of primer, sanded down, applied a second coat, painted it in black and white (two layers), sanded with steel wool, and finally applied three layers of varnish," said its creator, antonvodenitcharov.
The G4 Stormtrooper is made for audio work. " I decided to built my dream Hackintosh," said antonvodenitcharov.
Another iconic Mac, the iMac G4, gets an update from an Intel NUC mini-PC. "The project turned out great, and works terrific in early testing," wrote its creator, ersterhernd.
This is the world's first water-cooled Cube.
This is the cooling loop for the water-cooled Cube.
"I got excited by the idea that i could have a crazy powerful machine in ANY case I wanted," wrote modder rayd. "So naturally I picked the best looking case ever to be made; the Powermac G4 MDD." The Powermac G4 MDD runs OS X 10.9 Mavericks. Not too shabby!
"Extremely small form factor micro PC kits are gaining steam," writes Tony of TonyMacX86. "Since the Intel NUC (Next Unit of Computing) was launched, many users have started using them as HTPCs, and even full desktop replacements."
Tony built his tiny Hackintosh from a Gigabyte Brix Pro mini-PC.
There's no accounting for some people's taste. This modified Xbox 360 is based on a low-power Celeron processor. It's no speed demon, but serves well as a Mac-based media PC. "The idea was to make a small, cheap but yet capable machine, mainly intended for usage under a TV set," said its creator dj_aris. 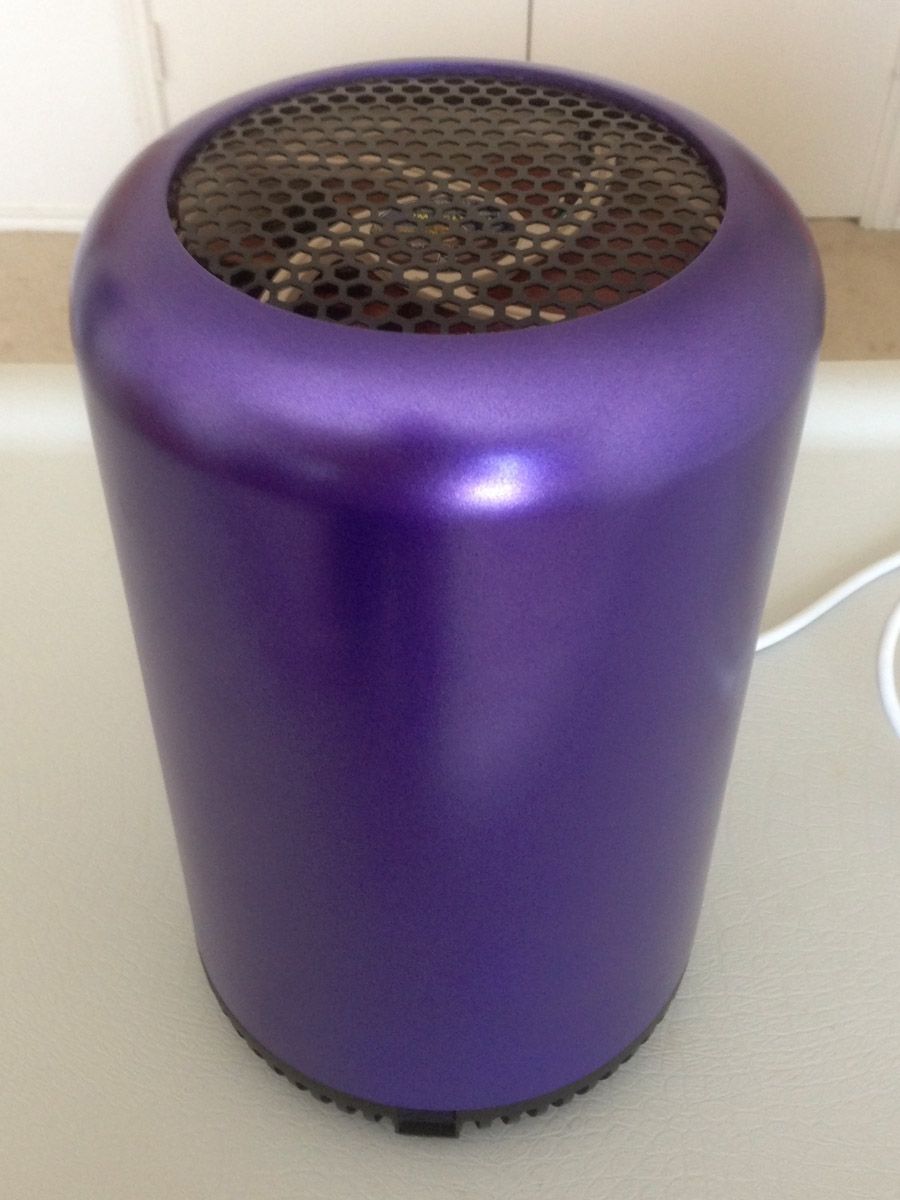 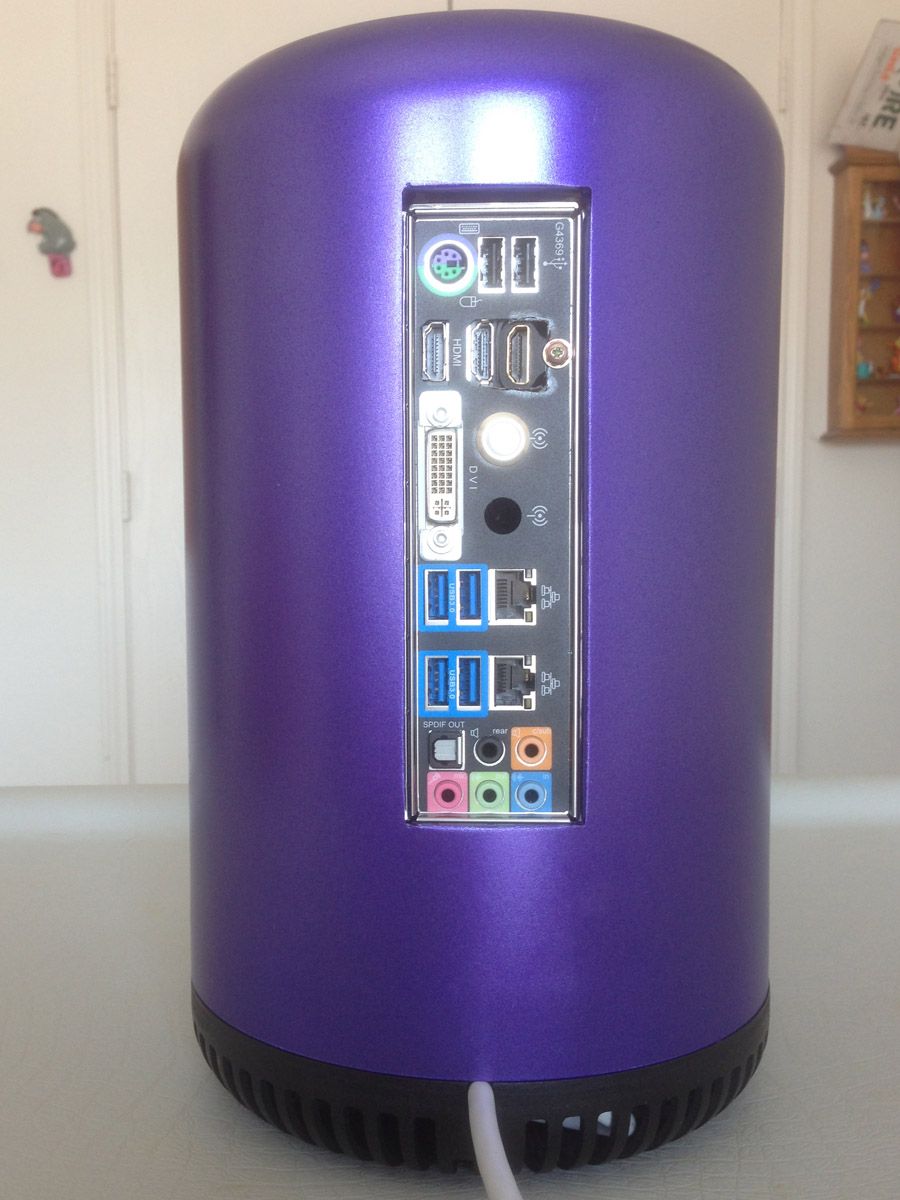 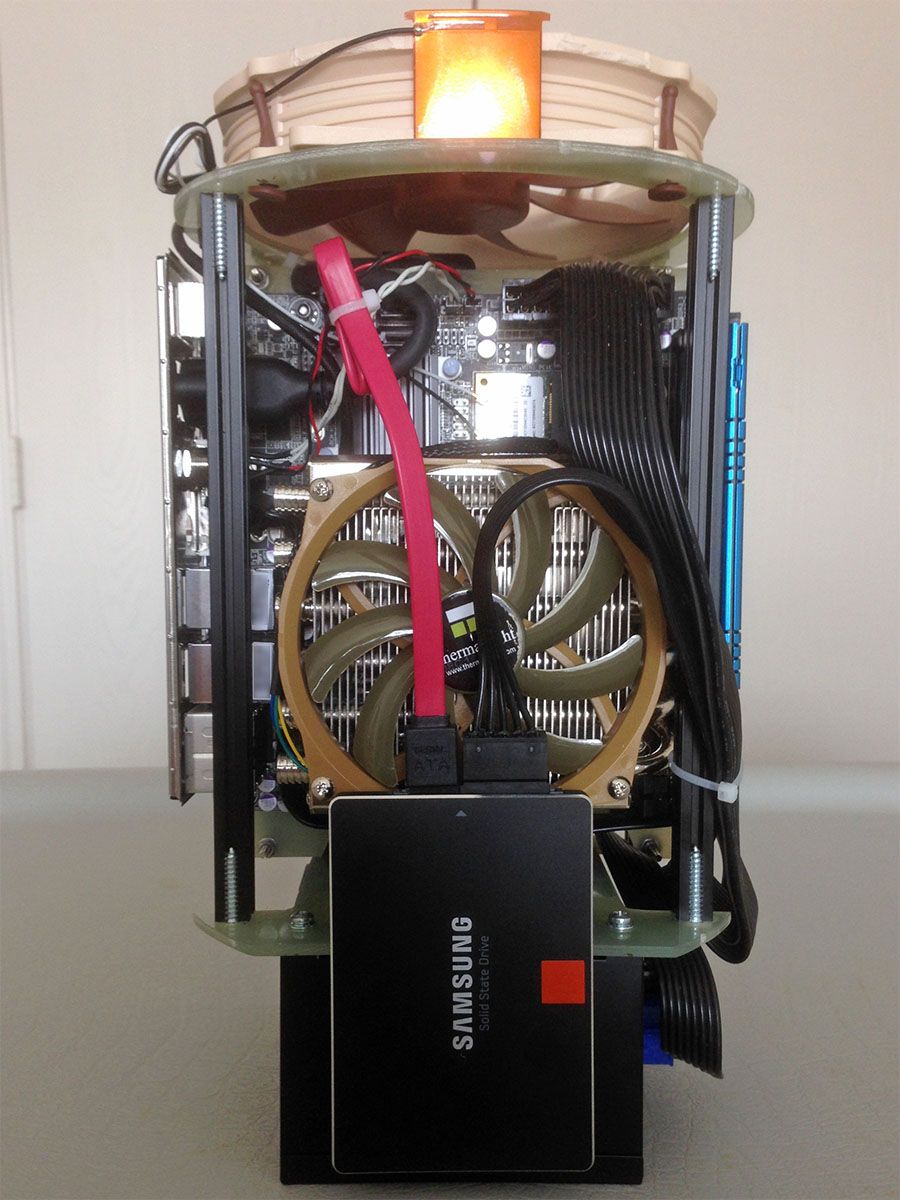 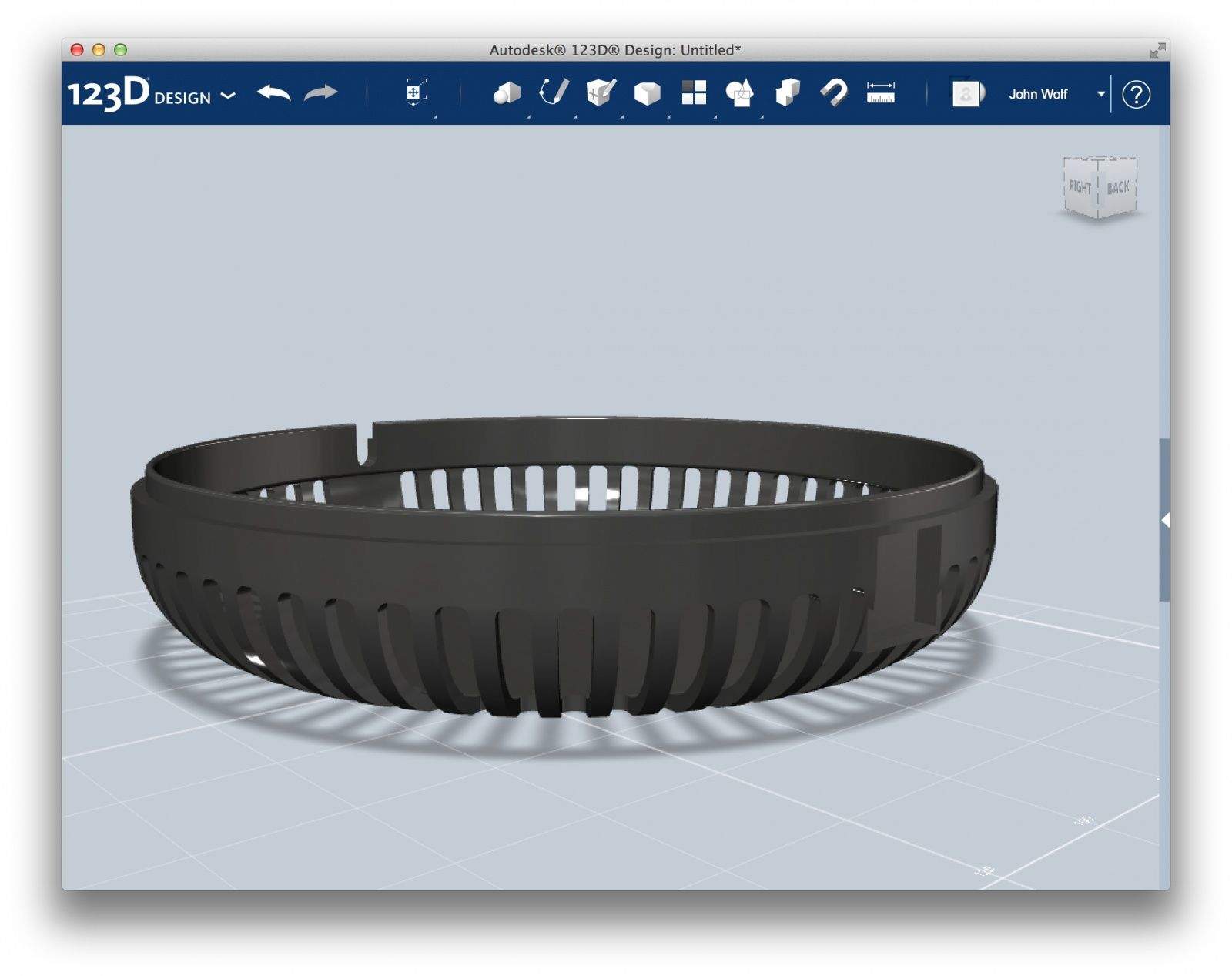 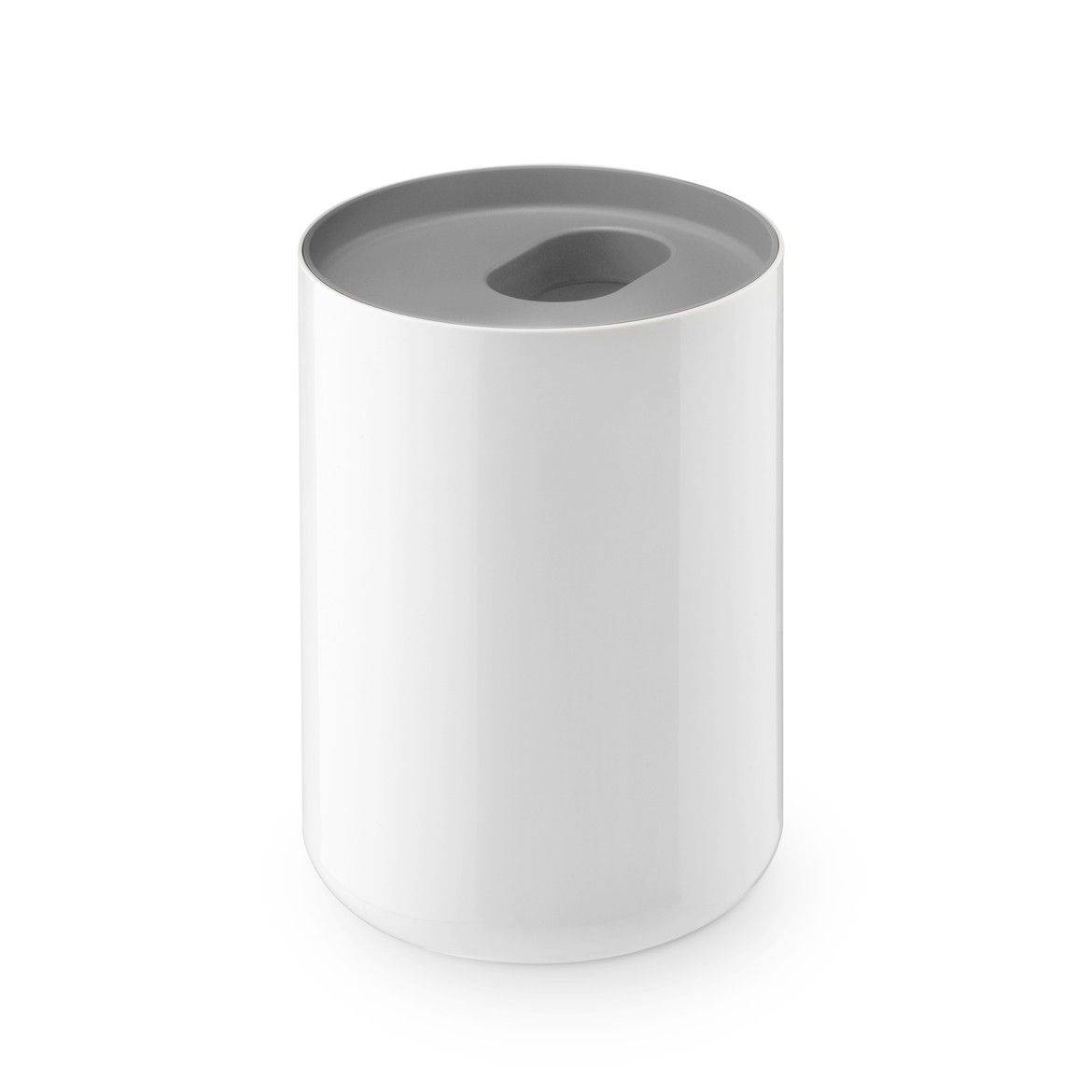 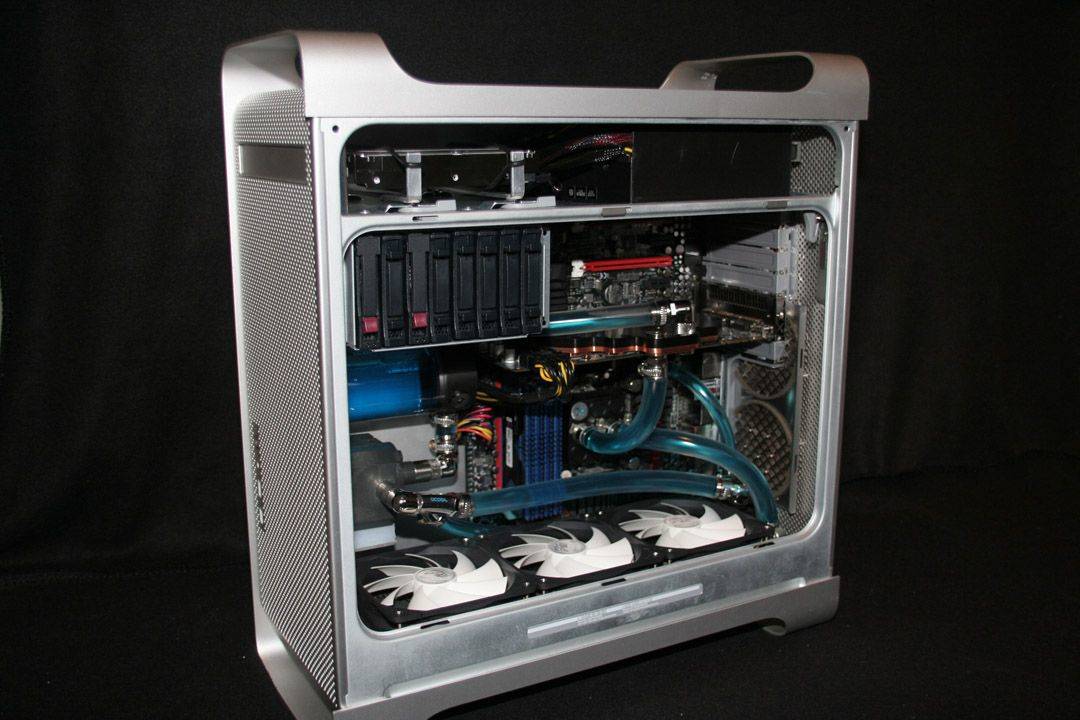 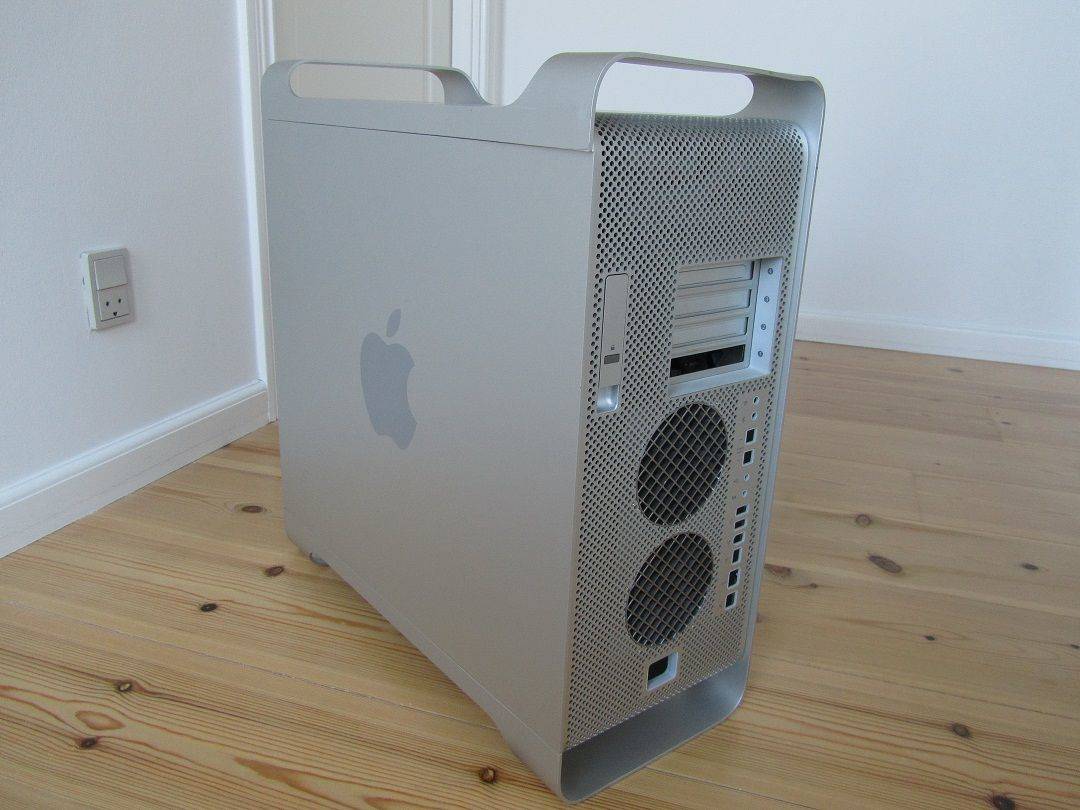 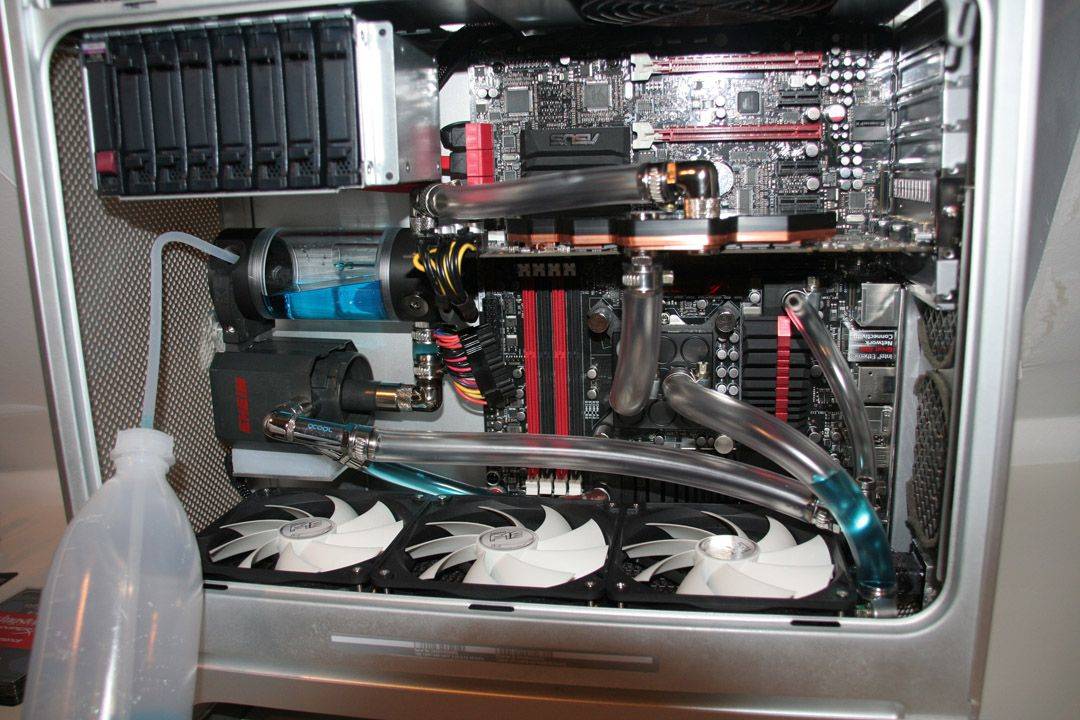 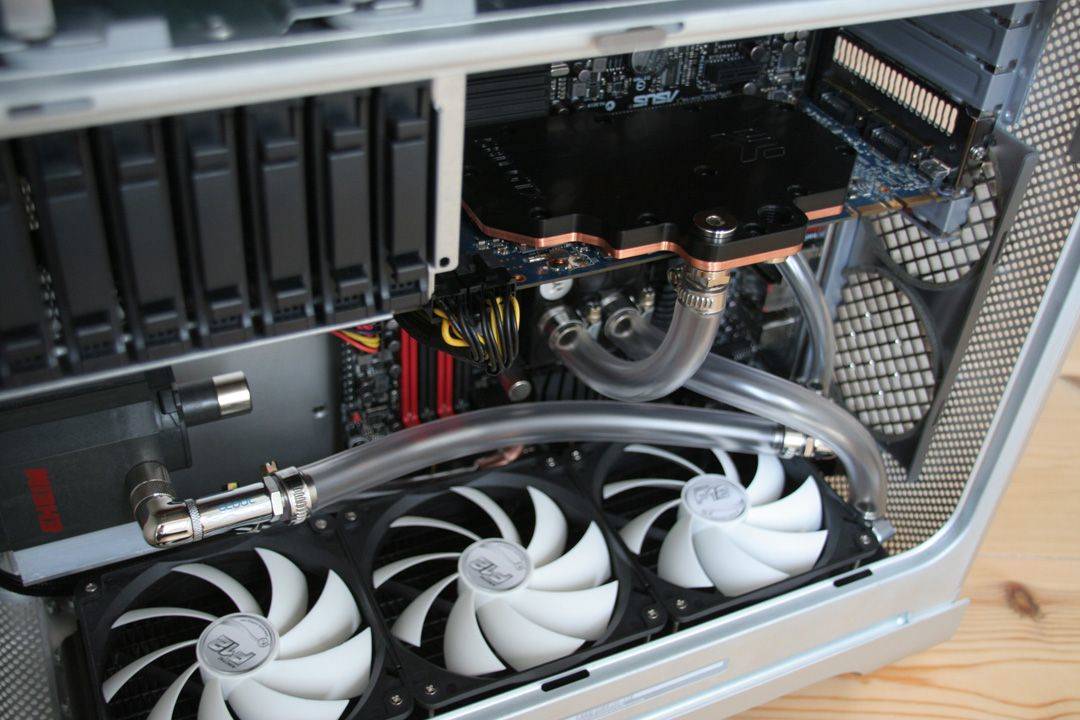 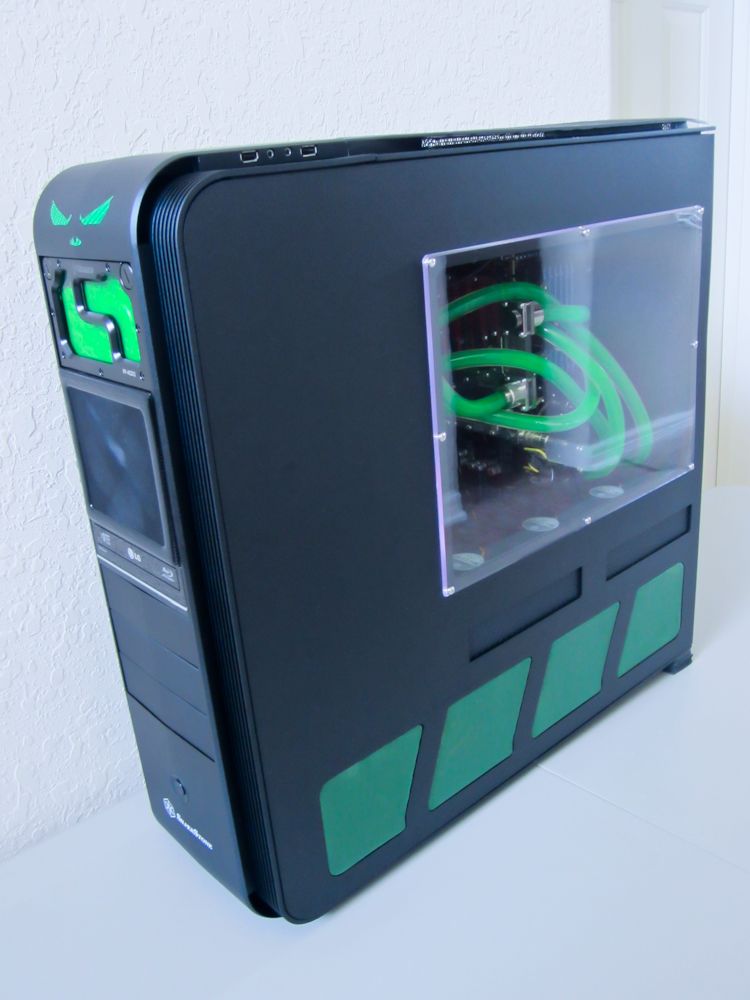 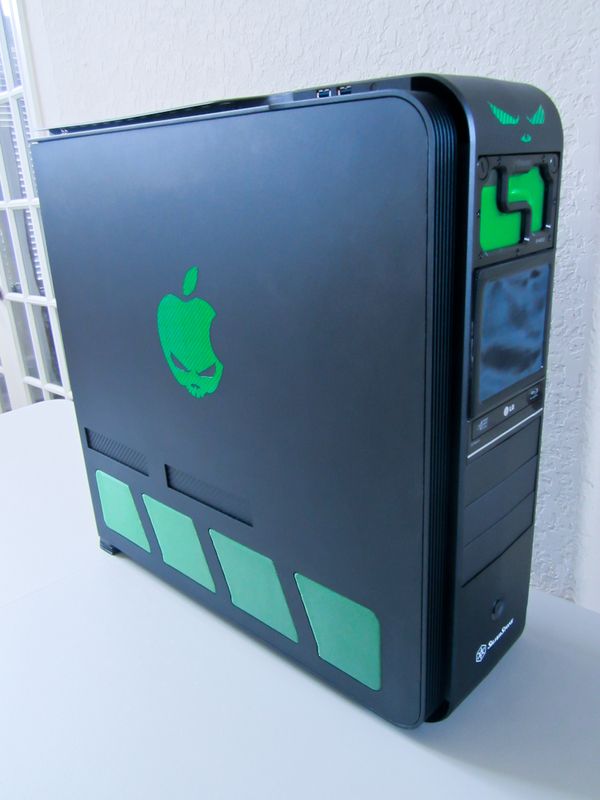 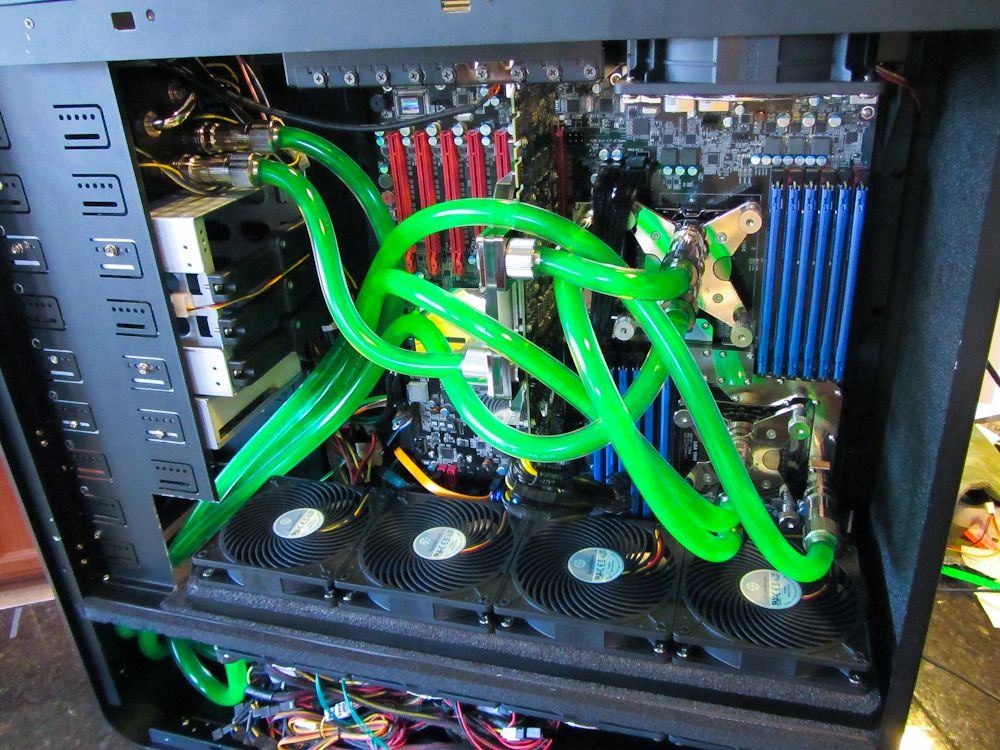 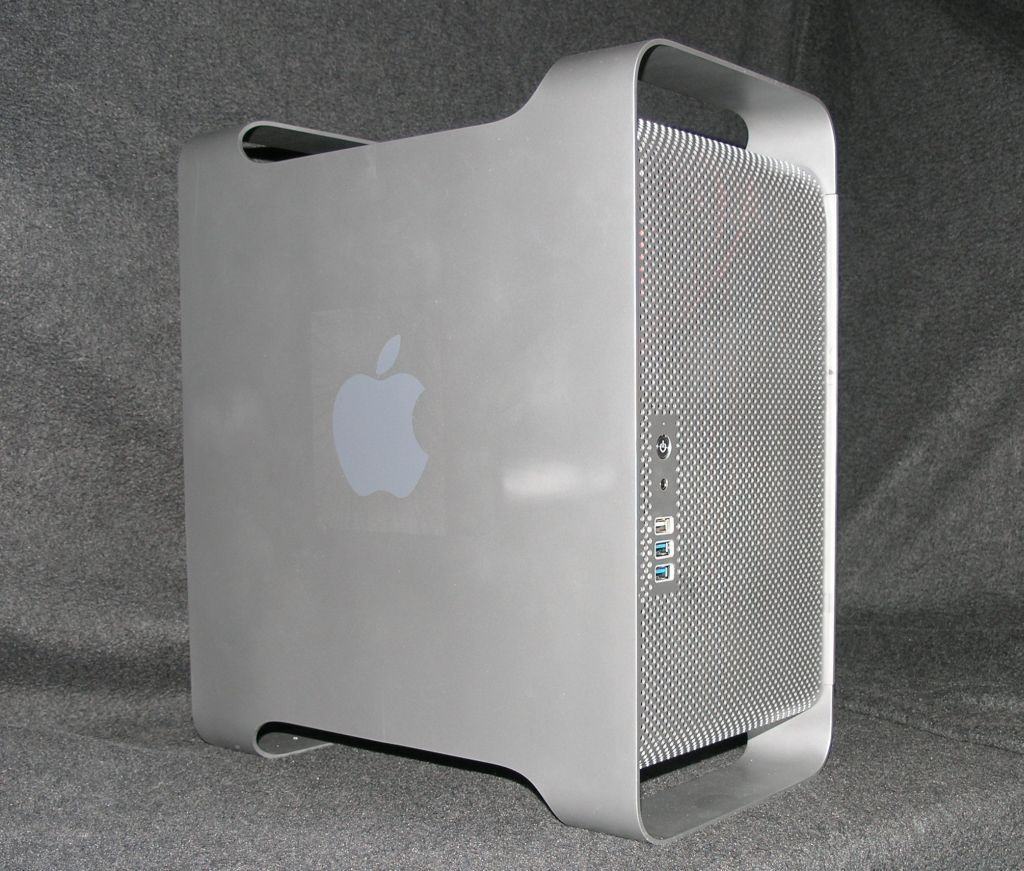 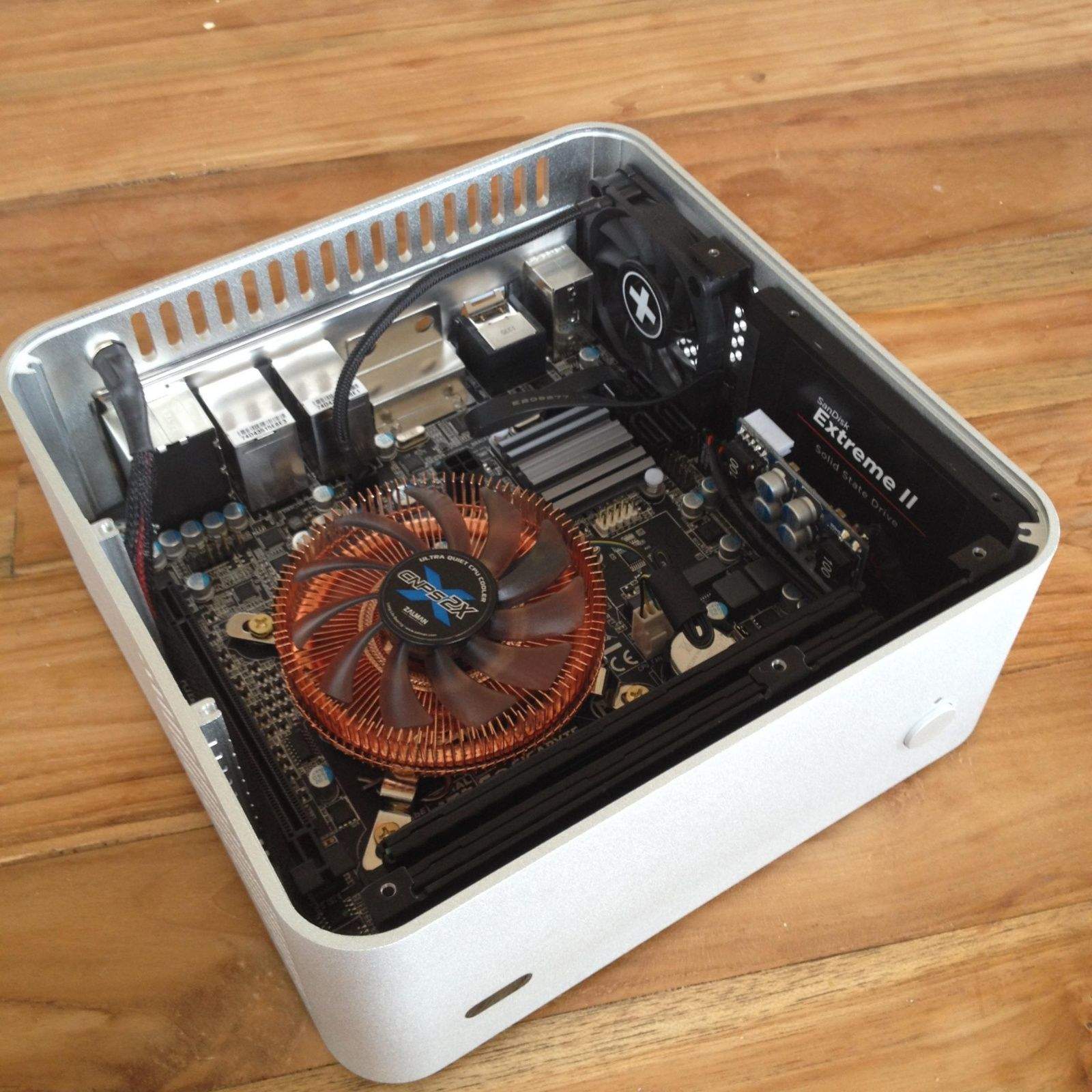 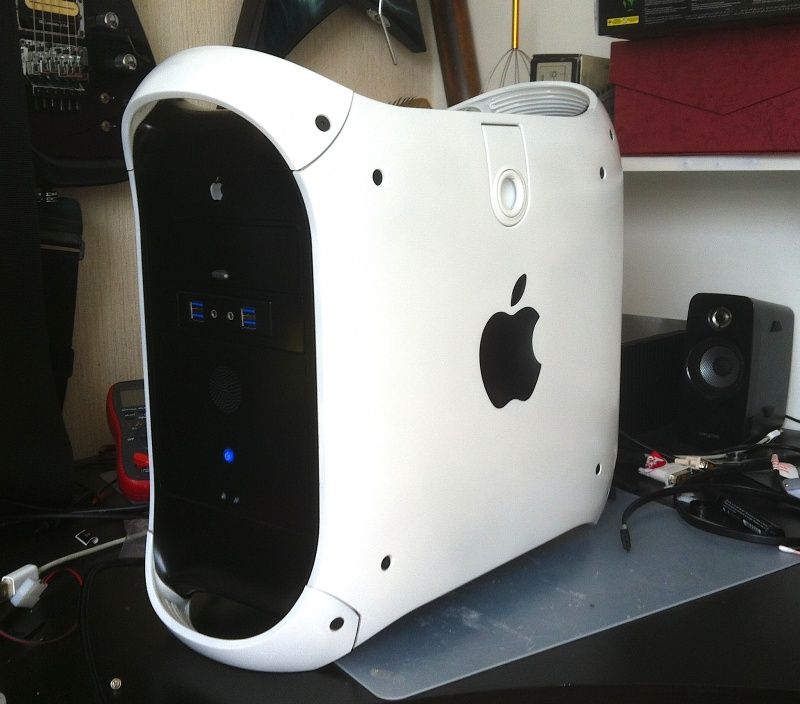 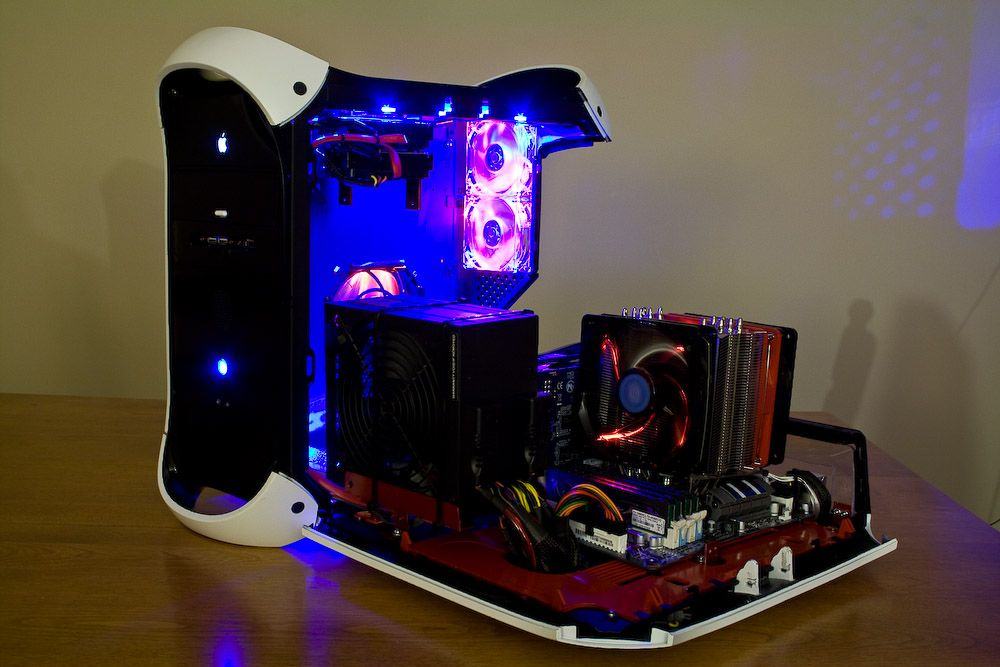 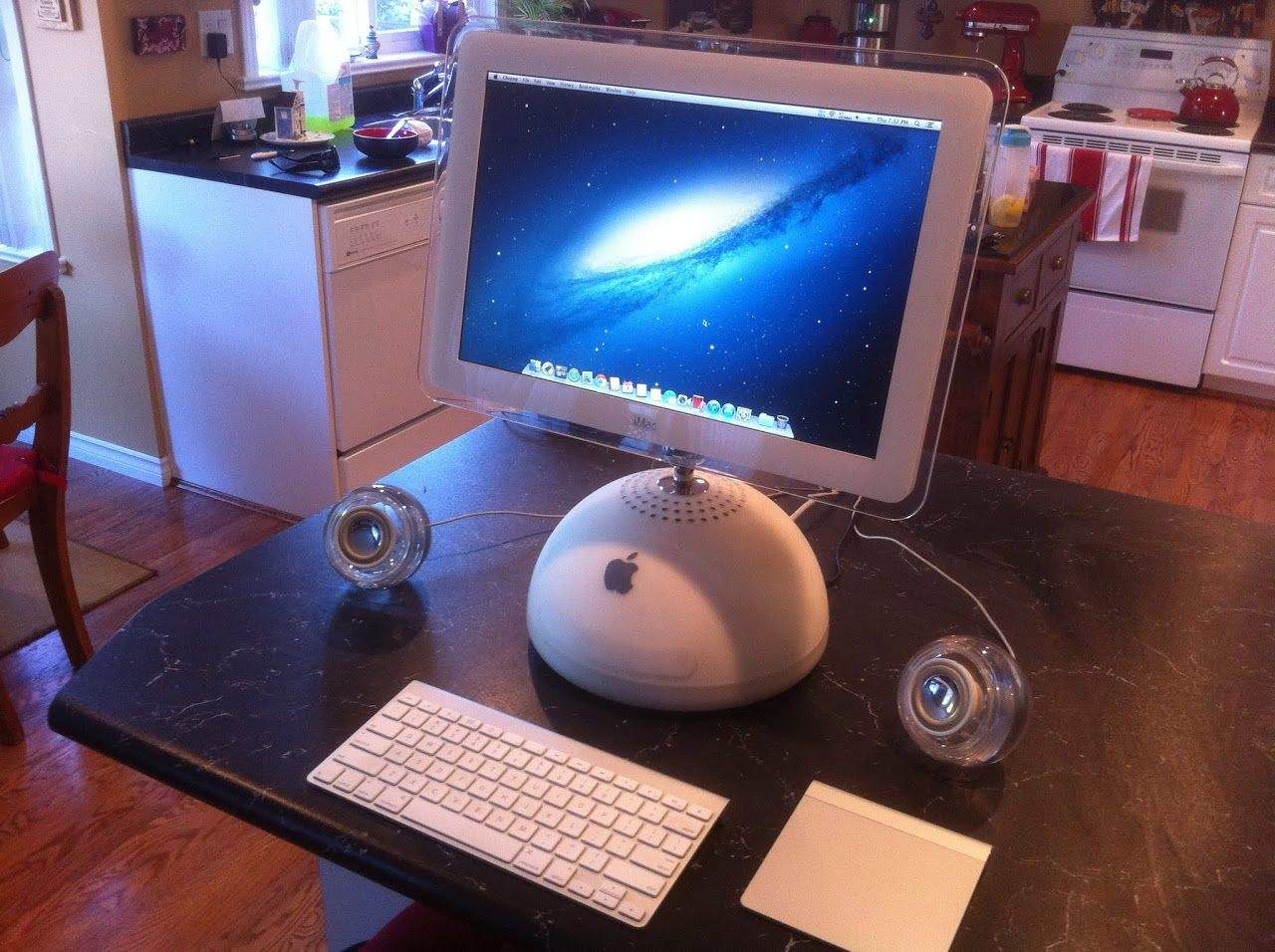 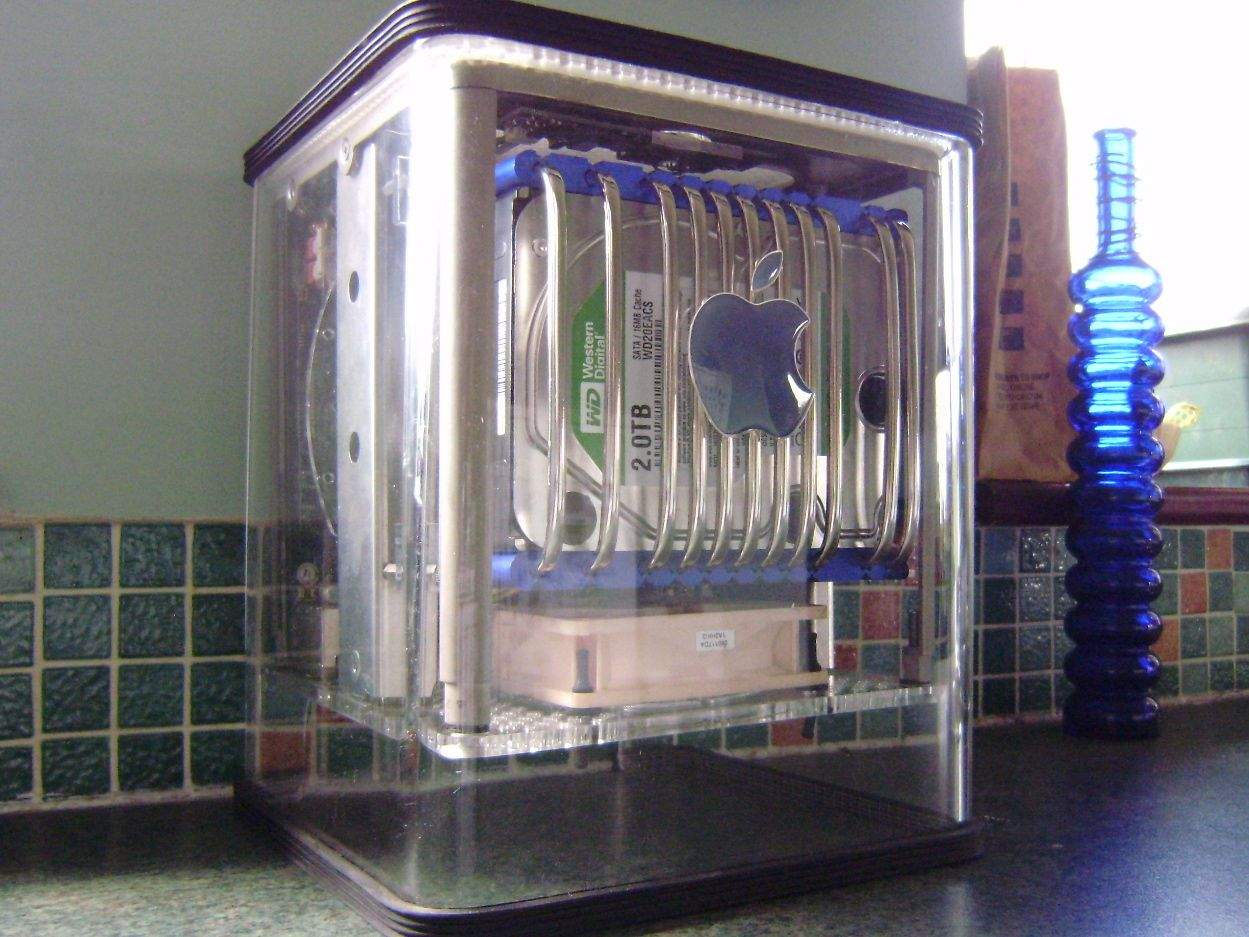 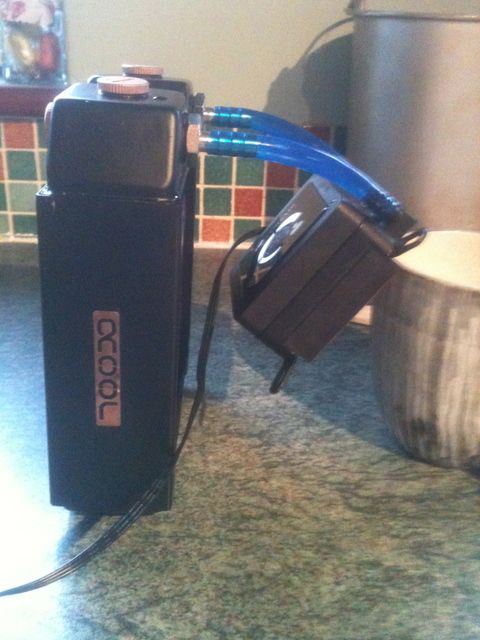 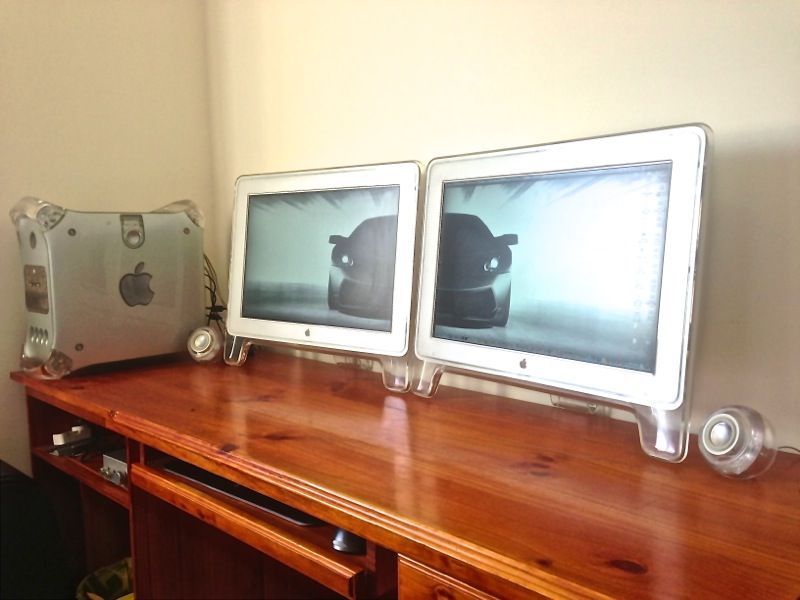 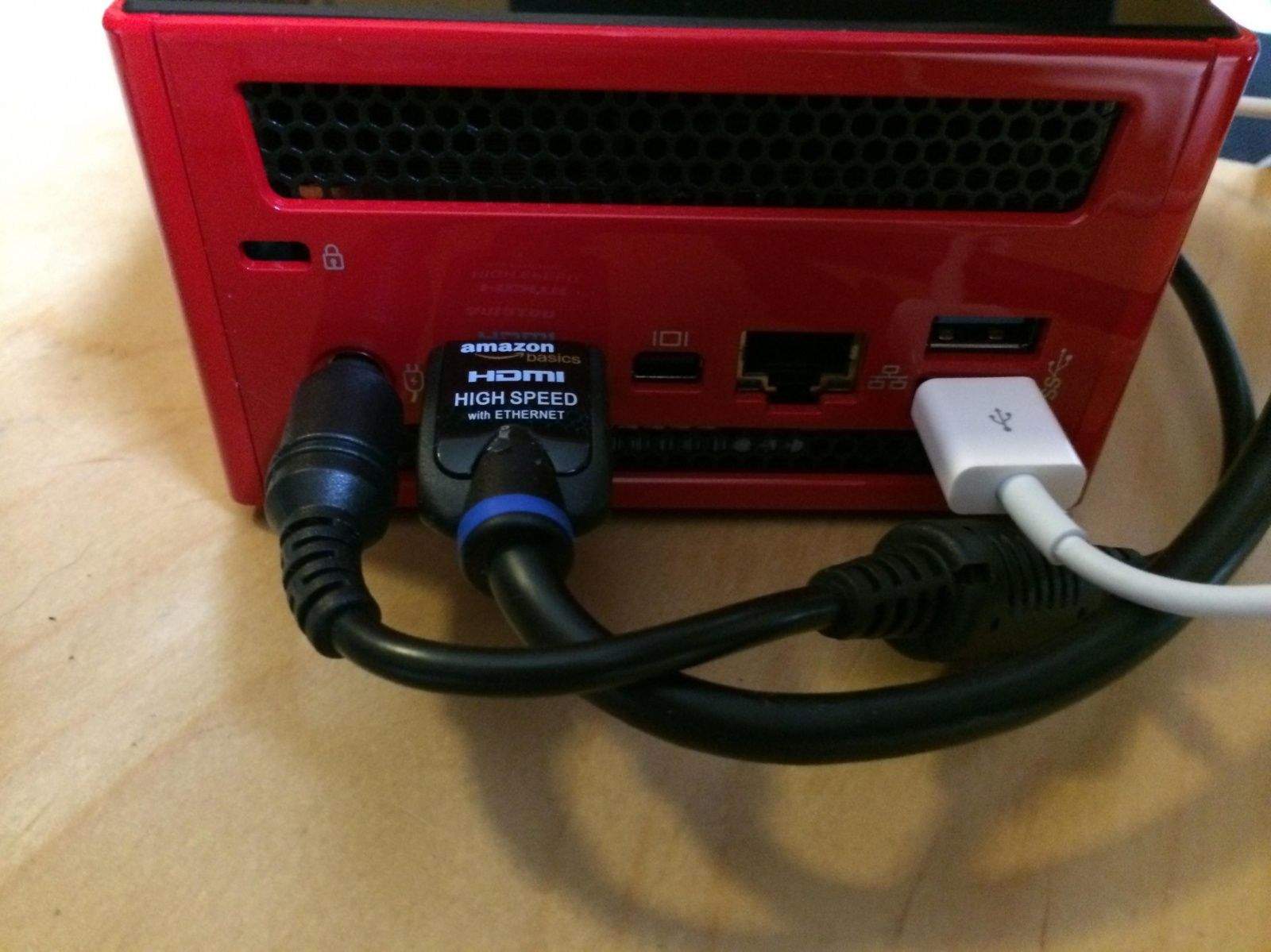 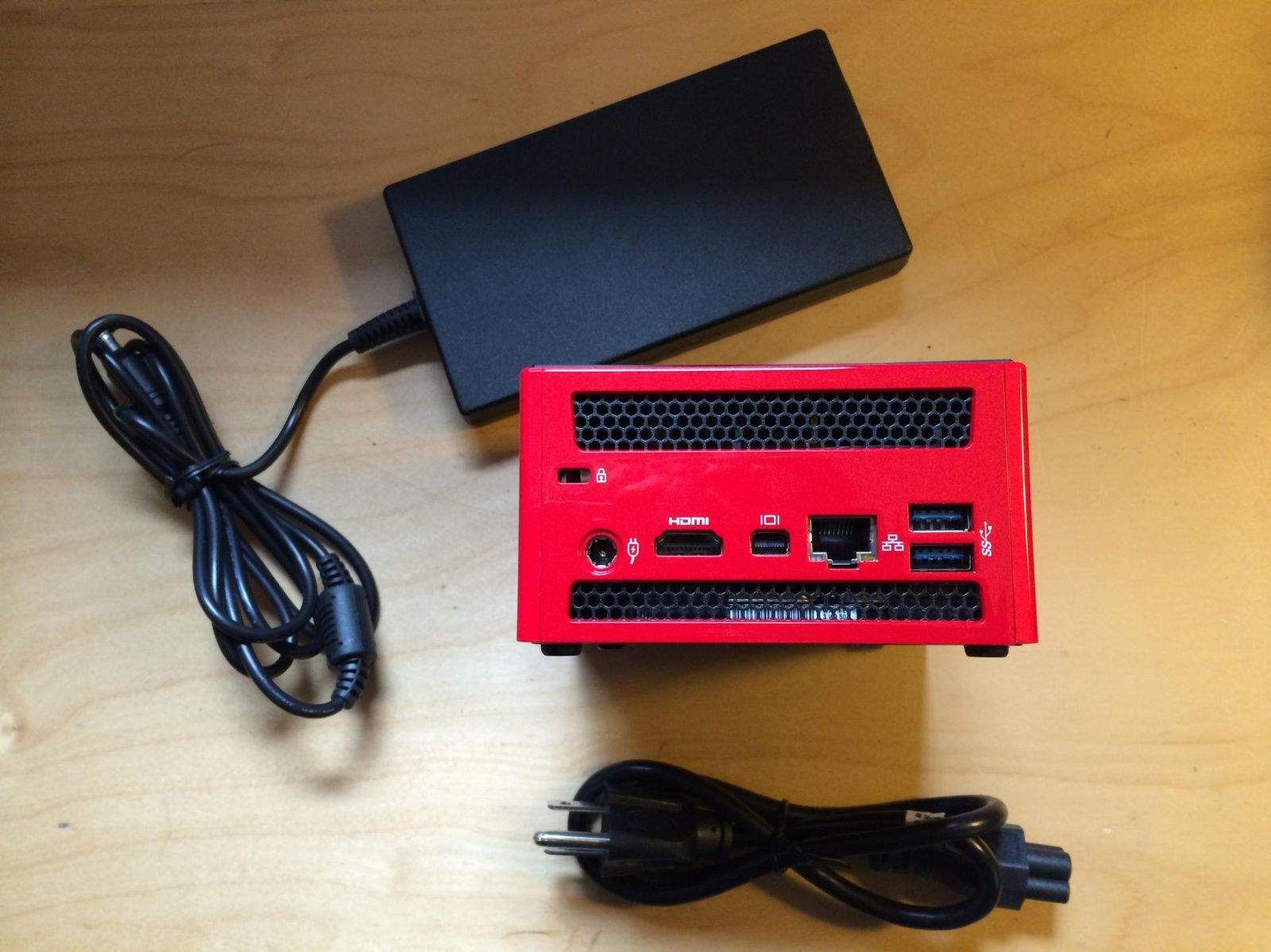 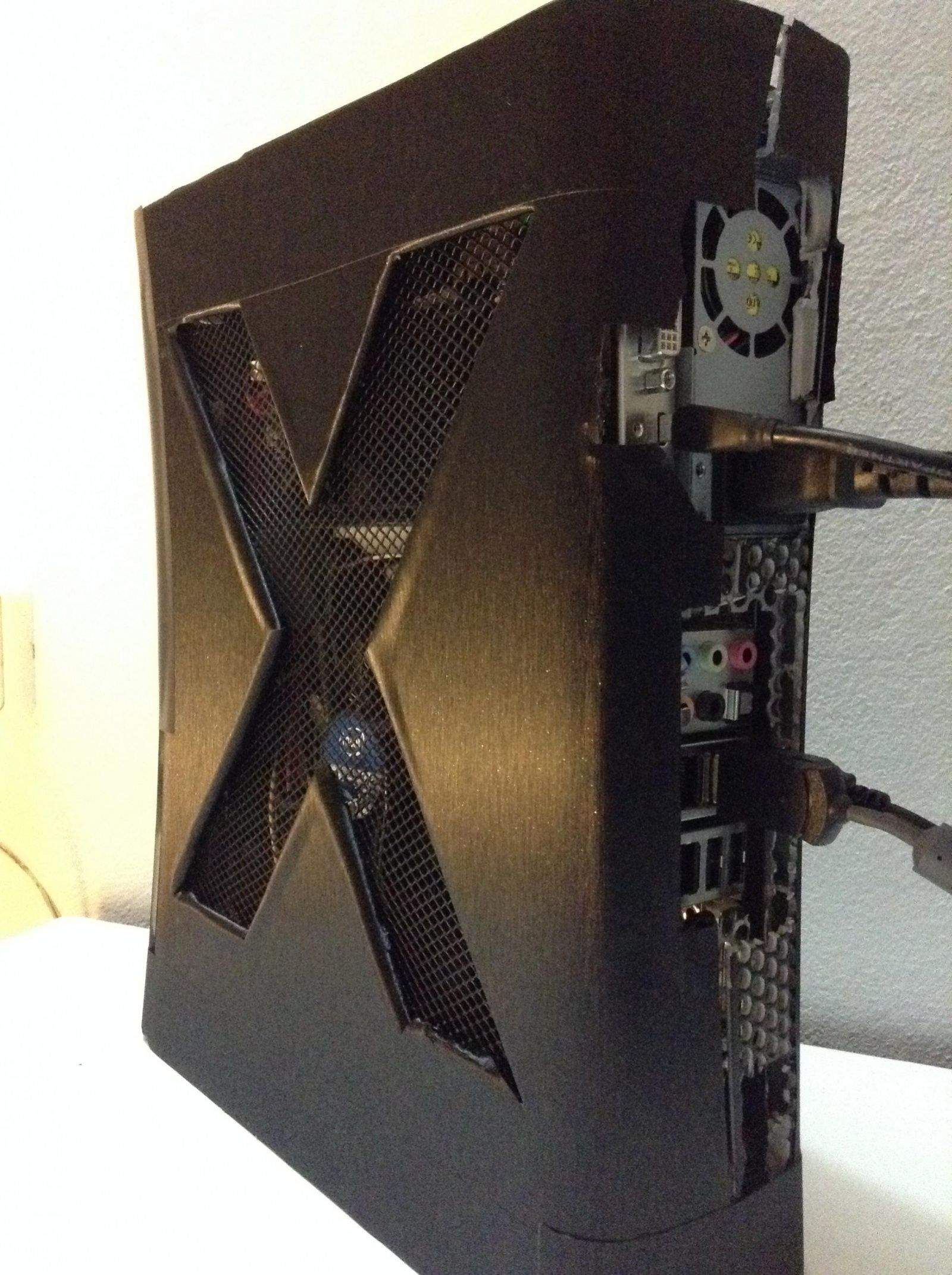 These are the computers Apple never built, and never will — a water-cooled Cube; a teeny-tiny G5; a faux Mac Pro in a trash can.

Oh wait. Apple did the trash can, but not a genuine rubbish bin with a matching toilet brush, like the purple beauty in the Hackintosh gallery above.

These homemade Macs, built from non-Apple hardware, come in a thousand different shapes and sizes, built by legions of dedicated, ingenious hackers. In the nine years since Apple switched to Intel processors, a DIY subculture dedicated to building alternative Mac hardware has steadily grown. It’s not a strictly legal endeavor — Apple’s EULA forbids OS X from running on non-Apple hardware — but Cupertino turns a blind eye to hobbyists.

“You know what? We’ve never gotten anything from Apple other than a few anonymous employees asking for help :),” said Tony, who runs Hackintosh website tonymacx86.com, in an email to Cult of Mac. “It’s clear that tonymacx86.com doesn’t sell hardware. I would think that they’d understand that we are promoting the purchase of OS X and Apple peripherals and laptops, and have zero tolerance for piracy.”

END_OF_DOCUMENT_TOKEN_TO_BE_REPLACED

Although it looks like a vanilla PC in a boxy case, the machine pictured above is a high-performance, custom-built Hackintosh.

This thing is hot! Known as the P280, after its Antec case, this Hackintosh is equivalent in performance to Apple’s latest Mac Pro workstation, but costs significantly less.

Roughly comparable to a Mac Pro costing $3,500, the P280 was assembled from off-the-shelf PC parts costing just over $2,000, including a water-cooling system to chill its chips. The Hackintosh runs Apple’s OS X Mavericks and, according to its builder, bests a similarly configured Pro on many benchmarks.

It has none of Jony Ive’s industrial design magic, of course, but that’s not the point. This is a DIY rig that’s as badass as it gets.