Launched a few weeks ago, the Pogoplug Series 4 ($100) is Cloud Engines’ latest attempt at making their network-attached storage device as ubiquitous as the microwave oven. Like its predecessors, the S4 allows you to attach a hard drive or flash drive to create your own cloud, which you can use to stream media, share files or create slideshows, all of which can be accessed over the Internet and shared with others. Additionally, it can also be used for remote backup.

END_OF_DOCUMENT_TOKEN_TO_BE_REPLACED

Pogoplug has been busy. For a company that focuses really intently on a single concept — namely, putting your stuff in the cloud — it has released a prolific number of products since the original Pogoplug first debuted in early 2009. Today brings their latest offering: The Pogoplug Series 4 ($100).

Cloud Engines, the outfit that makes the Pogoplug, sent us an Series 4 to check out, and we got a little hands-on time with it before the launch today.

END_OF_DOCUMENT_TOKEN_TO_BE_REPLACED

The Seagate GoFlex Slim Performance Hard Drive ($100) is a compact, sleek, and fashionable storage accessory good for both Mac and PC users. If you’re looking for a sexy and functional piece of computer candy, the GoFlex Slim is the Prada of portable storage solutions.

END_OF_DOCUMENT_TOKEN_TO_BE_REPLACED

Sure, the 32GB iPad has enough storage space for a bunch of apps, some songs and maybe even a movie or two. But for those of us with large media collections, even the mega 64GB version will start to feel a little cramped when stuffed full of music and videos (and I have no idea how those of you with 16GB iPads get by).

So, what if you could just stick a portable external drive into your iPad, like you would with a MacBook? Bam, extra storage! Well, yeah — but you can’t, right? Wrong! Well, sorta — you can’t plug one in physically; but the 500GB Seagate GoFlex Satellite ($200) gets around the whole physical connection thing by supplying its own wifi hotspot that lets you create a wifi link between it and your iPad. Genius.

END_OF_DOCUMENT_TOKEN_TO_BE_REPLACED 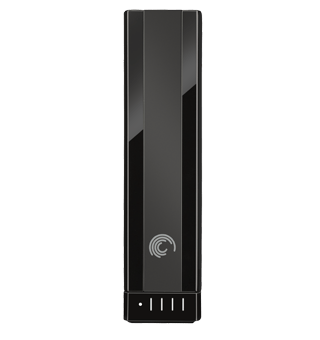 Seagate’s new, largest-in-the-world GoFlex Desk external hard drive ($250) weighs in at a strapping four terabytes. I know, that’s only one terabyte more than their next biggest desktop drive; but that’s enough storage space for 30.3 million more press images like the ones above; 833,333 more GoFlex user guides; or 2,272 more videos of me trying to duct tape some gadget to my forehead in a hilariously misguided attempt to gain interesting yet incredibly useless data about something or other.

END_OF_DOCUMENT_TOKEN_TO_BE_REPLACED

Seagate is set to launch a new addition to its GoFlex range called the Satellite – a battery-powered hard drive that connects to any device equipped with Wi-Fi, including your iPhone, iPad or iPod touch.

END_OF_DOCUMENT_TOKEN_TO_BE_REPLACED

Is your MacBook’s 250GB hard drive just not cutting it? SeaGate has just unveiled their newly updated FreeAgent GoFlex external hard drive, boasting two huge features that make it easy to recommend to on-the-go Mac owners with large media libraries, or those looking for a beefy and portable Time Machine repository.

First of all, there’s the size: the new FreeAgent GoFlex is the world first 1.5TB portable drive. Better, it’s entirely bus-powered, which means no power cable or dual-USB cable.

Even better, though, is that Seagate’s new drive comes standard with the company’s USB 3.0 adapter… a standard which no Macs support now, but definitely will sooner rather than later. In the meantime, the GoFlex is backwards compatible with both USB 2.0 and — if you snap on an adapter — even FireWire.

The SeaGate FreeAgent GoFlex comes formatted for Windows’ NTFS file system by default, but you can either reformat it with Disk Utility or avail yourself of the included NTFS driver for Mac. The price is quite reasonable too: it’s available now for just $229.99, which is $20 less than the MSRP.