What’s that you say? Not enough work stress in your life? We’ve got something that’ll ramp it right up, courtesy of Dutch graphic designer/cartoonist Metin Seven: a half-foot, 3D-printed bust of a glowering Steve Jobs. Try positioning it on your desk facing you, somewhere off in your peripheral vision, for maximum effect.

Steve can be ordered from cutting-edge craft-site Shapeways for $116.81 in a color option described as “white strong & flexible.” Obviously.

Depending where you fall on the “I’m a Mac” scale, the candid snapshots of Apple customers at Apple retail stores are a little unsettling.

People of Apple is a cringe-gallery modeled on the creative back fat of People of Walmart.

If you identify with the idea that Apple people are cool, you may want to think different after perusing a few pics of box-licking from the site that promises “Real people. Real Steve Jobs worshipers.” 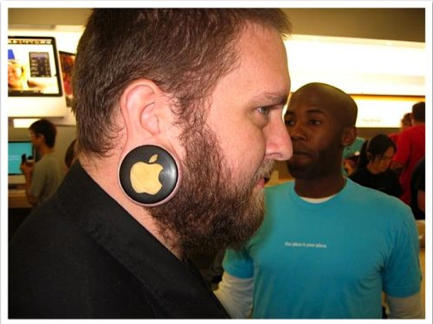 Who’s behind it? As iPhone Savior first discovered, it’s registered to Fake Steve Jobs, aka Dan Lyons. We double-checked with whois and it checks out — he’s owned the domain for a year but has just now started populating the site.

Would you be proud or shamed to end up in People of Apple?

Working together with our colleagues in the PRC’s propaganda ministry we have developed a great new counter-narrative that we’ve been pushing pretty hard in background conversations with friendly hacks. Basically it’s the notion that Foxconn’s suicide rate is actually below the national average of China, meaning that if you’re working at Foxconn you’re actually less likely to commit suicide. That’s right. The truth is, we are actually saving lives in China.

But, see, arguments about national averages are a smokescreen. Sure, people kill themselves all the time. But the Foxconn people all work for the same company, in the same place, and they’re all doing it in the same way, and that way happens to be a gruesome, public way that makes a spectacle of their death. They’re not pill-takers or wrist-slitters or hangers. They’re not Sylvia Plath wannabes, sealing off the kitchen and quietly sticking their head in the oven. They’re jumpers. And jumpers, my friends, are a different breed. Ask any cop or shrink who deals with this stuff. Jumpers want to make a statement. Jumpers are trying to tell you something.

Fake Steve: Our new spin on the Foxconn suicide epidemic

Someone is looking for a Steve Jobs look-alike for an “impersonator event” on Friday and Saturday in San Francisco’s SOMA — the area around Macworld.

The actual job isn’t specified, but looking like Steve is important, of course, but so is “punctuality.”

“If necessary, we can provide a black turtleneck and glasses,” the Craigslist ad says.

END_OF_DOCUMENT_TOKEN_TO_BE_REPLACED

As the FCC calls Fake Steve’s fast-growing Operation Chokehold “irresponsible,” Fake Steve is backing down from the protest he started as a joke.

Contacted by ABCNews, the chief of the FCC’s public safety and homeland security bureau warned iPhone users against crashing AT&T’s network. In a statement, he said:

“Threats of this nature are serious and we caution the public to use common sense and good judgment when accessing the Internet from their commercial mobile devices… To purposely try to disrupt or negatively impact a network with ill-intent is irresponsible and presents a significant public safety concern.”

As reported earlier, Fake Steve’s Operation Chokehold — which started as a joke — is growing fast. The number of Facebook fans has jumped from about 300 on Tuesday to more than 2,000 by Wednesday afternoon.

Indeed, the protest is growing so fast it has alarmed Fake Steve, aka Newsweek columnist Dan Lyons, who is backing down.

“I’m trying to find a way to spin it down and get everyone to back off,” he said in an email.

On his blog, Lyons is now asking protesters not to overwhelm AT&T’s network. Instead, Lyons is suggesting a flashmob-style protest outside AT&T’s stores. The suggestion isn’t going down so well with some readers.

“Don’t apologize, backpedal, or otherwise wimp out,” added reader jycitizen. “I don’t think this will have a Y2K effect on the overall service if people participate in this so called flash mob. I do hope it will be enough of a PR gaffe that companies like AT&T will stop taking their customers for granted, and will shine the light back on issues of consumer protection and net neutrality.”

The action was prompted by comments made by AT&T’s CEO Ralph de la Vega that some iPhone users are using too much data.

Fake Steve’s Operation Chokehold is growing fast. The number of Facebook fans has jumped five-fold overnight, from about 300 fans on Tuesday to more than 1,600.

The action is in protest of comments made by AT&T’s CEO Ralph de la Vega that some iPhone users are using too much data. The protest started as a joke, but is taking on a life of its own.

On Tuesday, AT&T dismissed the planned protest as a publicity stunt. A company spokesman downplayed any effect it may have — but that was when there was only 300 fans.

Fake Steve is calling on disgruntled AT&T customers to bring AT&T’s data network “to its knees” at 12 noon PST this Friday, December 18.

The action is in protest of comments made by a company executive that some iPhone users are using too much data. The protest started as a joke, but seems to have taking on a life of its own. Judging by comments on forums, Facebook and Twitter, people are planning to take part.

We understand that fakesteve.net is primarily a satirical forum, but there is nothing amusing about advocating that customers attempt to deliberately degrade service on a network that provides critical communications services for more than 80 million customers. We know that the vast majority of customers will see this action for what it is: an irresponsible and pointless scheme to draw attention to a blog.

The AT&T spokesman doubted the action — if it goes ahead — will have much effect. There’s only about 300 participants committed to take part, according to a Facebook fan page set up for the event. The spokesman also claims that many have criticized the event: several have pointed out that the action may affect emergency calls.

Operation Chokehold — a flashmob-style protest against AT&T that began as a joke on Fake Steve’s blog — looks like it may actually take place.

The meme is gathering a lot of steam on Twitter and Facebook, with people saying they plan to join the protest.

“We have got to do this!,” says Mashable reader pjserven, who set up a couple of Facbook pages to help mobilize protestors: an event page and a fanpage that makes it easy to invite friends.

The protest began with a Fake Steve post about an internal Apple memo — fake of course — about bringing AT&T’s network to its knees on Friday, December 18 at noon Pacific:

Subject: Operation Chokehold
On Friday, December 18, at noon Pacific time, we will attempt to overwhelm the AT&T data network and bring it to its knees. The goal is to have every iPhone user (or as many as we can) turn on a data intensive app and run that app for one solid hour. Send the message to AT&T that we are sick of their substandard network and sick of their abusive comments. The idea is we’ll create a digital flash mob. We’re calling it in Operation Chokehold. Join us and speak truth to power!

“I made up the note,” said Dan Lyons, aka Fake Steve. “A reader sent in the opposite idea — a boycott of AT&T for one day, everyone stops using their iPhone for a day, and we show them what’s what. I liked the sentiment but who’s going to stop using their iPhone? And for a whole day? I figured no one would go for it. But a one-hour flash mob of overuse? Now that i could see people doing.”

Remember that famous mosaic portrait of Steve Jobs that Fortune commissioned made from popular Apple products?

Well, a reader of Day Lyon’s Fake Steve blog created this portrait of Microsoft CEO Steve Ballmer from snaps of Microsoft’s most memorable product — the blue screen of death. Check out the detail of Ballmer’s tongue: 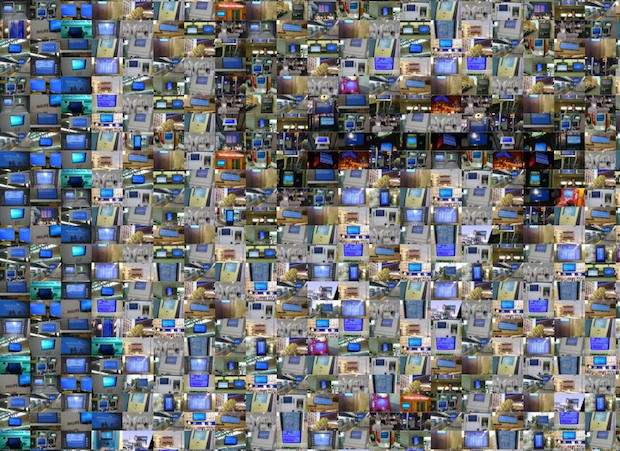 This is actually quite astounding. Dear Reader Fraser has created a mosaic using 80 random Windows crash shots to portray Uncle Fester. Below is a detail of the tongue. Click on both to see them in greater detail. The full file is really amazing — we hope to make it available as a download soon so that you can print it out, frame it, give to people you don’t like as a winter solstice holiday present — you get the idea.

For what it’s worth, Fraser says he’ll create a poorly drawn portrait of anyone — just check out his site, PoorlyDrawnPortraits.com. Much love, Fraser. You sick bastard.

Isamu Sanada’s day gig is photography, but his passion is Apple mock-up design.

An amateur designer of fantasy Macintoshes with a website that showcases dozens of his speculative designs for Apple gear, Sanada got his mock-up cred back when he posted an amazingly prescient take on the Titanium G4 PowerBook months before the real deal was released.

Though he’s gotten lots of praise for his designs, Sanada has been quoted regarding his design chops humbly, saying, “Apple’s thought is more splendid than my thought.”

Hit the jump for more Steve Jobs lookalikes and if you find one out and about — or happen to be one yourself — send us a pic or post it on our Facebook wall and we may feature yours in a gallery post down the road.