The iOS 6 beta has been available for four days now, but we’re still stumbling across new features that Apple didn’t mention during WWDC. One of those is the ability to receive government AMBER and emergency alerts automatically on your iPhone, iPad, or iPod touch.

END_OF_DOCUMENT_TOKEN_TO_BE_REPLACED

Healthcare has been a natural fit for the iPad and, to a slightly smaller extent, the iPhone. iOS devices can provide interaction with electronic records and other patient information as well as offer access to reference guides, medical images like X-rays, and even remote diagnoses via FaceTime.

A new program being tested in California’s Marin County aims to bring some of those abilities to paramedics in the field. The program, which equips paramedic teams with iPhones via a specialized QR reader app, is a joint venture with Silicon Valley startup Lifesquare. Its aim is to allow paramedics instant access to patient information using QR codes stickers.

END_OF_DOCUMENT_TOKEN_TO_BE_REPLACED

Verizon has announced its plans to lead the text-to-911 initiative here in the US. Starting early 2013, Verizon customers will be able to send 911 SMS texts to emergency call centers. This new way of communicating with 911 call centers is a great step forward in public safety and allows for those in need to relay information in cases when calling or talking are difficult.

END_OF_DOCUMENT_TOKEN_TO_BE_REPLACED

It doesn’t take a huge stretch of imagination to picture some of the ways that the iPad can be used in the workplace. The idea of it as a sales tool, an electronic medical chart, and as a digital textbook device all come immediately to mind as common on-the-job iPad uses. But the iPad’s versatility lends itself to a variety of industries and jobs that you’ve probably never considered.

One example is agriculture management from the cab of a farm combine – one of the unexpected places to find the iPad that Hard Candy Cases CEO Tim Hickman mentioned to me during a recent conversation. His company, which also produces the ruggedized Gumdrop Cases, has received bulk orders for iPad from some surprising sources and has led to iPad adoption  in places beyond where most of us would expect. I decided to follow up on that conversation with some research of my own.

END_OF_DOCUMENT_TOKEN_TO_BE_REPLACED

Developed by a crime victim, a new app called ThugsMug promises to snap pics of perps while misdeeds are in progress to provide evidence.

Launched July 24, the $4.99 app bills itself as “World’s First Safety Protection App for iPhone & iPad 2.” That’s not strictly true, we’ve alerted you to a number of ICE (in case of emergency) apps like Silent Bodyguard which equips users with a panic button.
This may be the first one, though, that activates your camera to capture evidence at regular intervals. 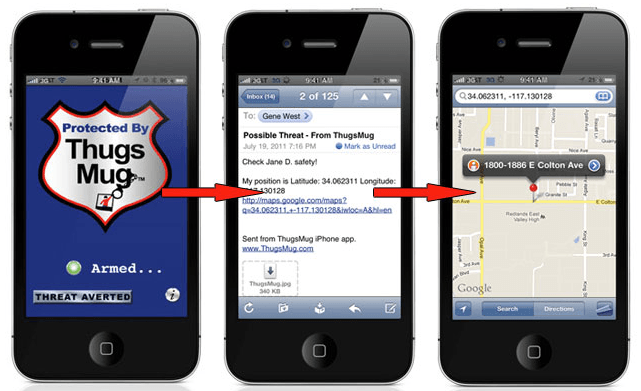 The developer suggests you activate ThugsMug in potentially dangerous situations, putting it in “armed” mode when at ATM machines, parking lots, bus stops, subways, train stations and malls, or while on vacation or walking or jogging alone.

Should danger strike, by hitting “active,” the app sends email messages with pictures to your designated emergency contacts. It can be set to take pictures every 10 seconds, with flash if your device supports it. The app will also alert 911, too.

The person who developed it was victim of a motorcycle jacking incident, which ended up in a crash and violent beating. There were witnesses, but no one was ever caught.

The developer, who remains nameless in the account, says:

“Reflecting back, I wish I could have captured a picture of them the moment I jumped up from the crash. I had immediately grabbed my phone from my back pocket and had it in my hand when I was assaulted however, my phone did nothing more than block a few blows. Even if they had taken my phone and destroyed it, the pictures would have already been automatically sent to my emergency contact.”

Do you think these emergency apps are useful?

There is an app for practically anything and now there are apps that will help you to impersonate a cop. Especially a cop making traffic stops as one woman reported to Northwest Indiana police recently.

The woman called 911 late one night recently with the suspicion that the black Pontiac GTO with flashing blue and red lights at the top of its windshield wasn’t really a cop. She thought that the driver of the car was following her and attempting to pull her over.