If you live near a big city, or travel to metro areas frequently, you know what a pain in the butt parking can be. Parking lots and garages use confusing signage to trick you into spending more money, and some less expensive spots are often poorly labeled or hidden entirely. With ParkWhiz, you can get the most bang for your buck, and know exactly what you’re getting. Best of all, you’ll save time so you can enjoy your trip without adding stress.

END_OF_DOCUMENT_TOKEN_TO_BE_REPLACED

SAN FRANCISCO — In a city obsessed with parking, app developers who came up with disruptive ideas to turn vacant spots into cash found their apps targeted by local officials. But the crackdown might be unnecessary: So far, the sharing economy seems to stall when it comes to auctioning off parking spots.

Cult of Mac offices are in the Mission District, epicenter of the parking crunch, so we took MonkeyParking and Sweetch — two of the “predatory” apps named in a cease-and-desist letter from San Francisco City Attorney Dennis Herrera — for a spin.

END_OF_DOCUMENT_TOKEN_TO_BE_REPLACED

Trapster is a popular iPhone app that alerts drivers to police speed traps, red light cameras and DUI checkpoints. The company has tried to remove DUI checkpoints, but users kept putting them back in.

END_OF_DOCUMENT_TOKEN_TO_BE_REPLACED

Four U.S. Senators have sent a letter to Apple urging it to pull several apps they claim help drunk drivers avoid the police.

“Giving drunk drivers a free tool to evade checkpoints, putting innocent families and children at risk, is a matter of public concern,” the senators said. “We hope that you will give our request to remove these applications from your store immediate consideration.”

The letter was sent to Scott Forstall, who is in charge of iPhone software at Apple.

Are there really numerous DUI checkpoint apps? And should they be pulled? Last year, I talked to Trapster (likely one of the apps targeted by the Senators), which was seeing a number of police departments using the app to highlight their own checkpoints. It’s just another way of increasing enforcement, the police say.

Here’s the full text of the letter that the senators sent to Scott Forstall:

END_OF_DOCUMENT_TOKEN_TO_BE_REPLACED 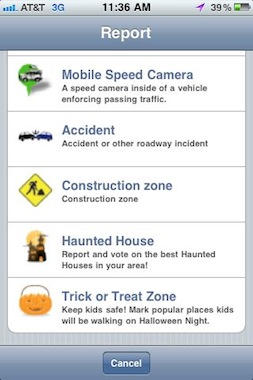 Halloween, with its legions of black-clad kids running around and darting out into the street, introduces its own variety of driving perils. So in addition to warning other users of speed traps and red-light cameras, Trapster users can now mark two new location types on its map this Halloween: haunted houses and trick-or-treat zones.

The free app works through crowdsourcing, which means any registered user can add markers which then become viewable to other Trapster users; and if users find a marker that’s inaccurate (say, if some user tagged their in-laws place as a haunted house), it can be removed with enough votes against it. Now if only the had a marker for houses with the best candy…