LAS VEGAS, CES 2011 — Joby released two new iPad stands yesterday. One borrowed from their line of bendable camera tripods, the other was more unusual, and took a page from the Japanese art of origami.

The GorillaMobile Ori ($80)  for iPad is made from a material called Hylite — a blend of aluminum and polypropylene — which felt pretty light and is supposedly super-tough. The origami-inspired design gives the case an intricate look (so many cutouts) and allows for a continuous hinge that can adjust the viewing angle to practically any position within its range. it’s also equipped with a swivel hinge that allows the iPad to be easily switched between portrait and landscape positions — or even turn the iPad into a steering wheel for racing games. Pretty cool.

END_OF_DOCUMENT_TOKEN_TO_BE_REPLACED

LAS VEGAS, CES 2011 — Still a day to go before CES is officially at full steam, we found a few nuggets at a Tuesday night press event.

First up is a pair of solar-powered goodies from Eton. The Soulra 2 is the pumped-up version of the original Soulra dock (which was featured in our 2010 Holiday Gift Guide). It’s got eight speakers, a massive flip-up, high-capacity solar-panel providing eight hours of tunes on just five hours of charge, and a facelift — we think it looks much more refined than its predeceessor.

END_OF_DOCUMENT_TOKEN_TO_BE_REPLACED

Proving that news embargoes and electronics trade shows attended by tens of thousands of people do not play well together, word of Blue Microphones’ new Yeti Pro USB microphone leaked from the desert Tuesday night as the giant Consumer Electronics Show began picking up steam in Las Vegas.

The highly anticipated successor to Blue’s successful, top-of-the line USB microphone, Yeti Pro is the first USB mic to combine 24 bit/192 kHz digital recording resolution with analog XLR output, making it potentially one of the finest, most versatile recording tools on the market.

Yeti Pro looks quite promising from here, an assessment shared by CES judges, who made Yeti Pro a 2011 CES Innovations Winner in High Performance Audio. The mic is set to retail for $249 and should be available at authorized Blue Microphone distributors later this month.

END_OF_DOCUMENT_TOKEN_TO_BE_REPLACED

LAS VEGAS — Griffin revealed something really cool today: a sensor that hooks up to your car’s diagnostic computer and feeds all kinds of info to your iPhone. Griffin calls it the CarTrip, and it attaches to your car’s OBD-II sensor (the thing car mechanics uses to diagnose problems), collects and stores the data, then sends it to your iPhone (we’re not sure how, because the press release doesn’t say), which then displays the data in realtime with the help its free partner app, CleanDrive.

The app/hardware package will reveal all kinds of information, like fuel consumption rates, acceleration, and it’ll interpret diagnostic codes. It’ll also display a “Carbon Score,” so you can figure out how much you’re befouling the planet by driving around.

Update: CarTrip is equipped with Bluetooth for relaying the data to an iPhone. Thanks Levi! 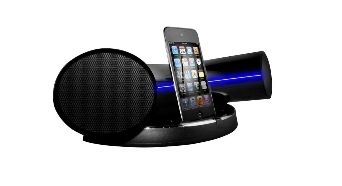 LAS VEGAS — After hours of driving through the cow-infested flatness of California’s Central Valley, CultofMac Editor Leander Kahney and I have finally arrived in Vegas, primed to report from this year’s Consumer Electronics Show. The doors only officially open on Thursday, but here’s some of the sparkly new stuff we saw released today that we’re mega-pumped to get our hands on at this year’s show:

END_OF_DOCUMENT_TOKEN_TO_BE_REPLACED

While most of the Western world was wolfing down grammies Christmas pudding and singing Christmas carols, our gadget squad was quietly steeling itself (in between eggnog and unwrapping gifts, of course) for the onslaught of new tech at the monster of all gadget events, the annual Consumer Electronic Show in Las Vegas.

The madness kicks off early next week, and we’ll be smack in the middle supplying wall-to-wall coverage from the get-go. From advance information we’ve received, the really big news this year will be a dizzying acceleration toward  hardware that interfaces with iDevices, including what seems like a massive dose of app-enhanced gadgets — gadgets that are built to interface with an iDevice and come with their own app, basically making the iPad or iPhone an intrinsic part of the gadget.

In fact, we were pretty surprised and disappointed during last year’s CES when it seemed all we could dredge up of the promising new concept was a clock and an insipid speaker dock. But the concept had only just been made available (with uncharacteristically little fanfare from Apple) earlier that year, and it seems gadget makers have caught up — we’re seeing teasers for everything from an iPhone-connected thermometer, to a car stereo that integrates the iPhone as a display to, a little bizarrely, an iPhone-controlled ball.

Not quite as cool but wider in appeal is the vast assortment of new wifi and Bluetooth connected sound hardware that’ll be on display; there’s also an increase in gadgets that stream and/or communicate with the cloud. And of course, we’ll be covering all the usual suspects: portable audio, speakers, docks, storage, cameras, gaming hardware, peripherals — you name it. Stay tuned.