We bumped into neophyte Australian headphones-maker Audiofly in January, during a press-only event at this year’s Consumer Electronics Show, and gave two models in the four-model lineup a whirl. Their mid-level AF45 set sounded great for $50; but the next one I tried — the top-of-the-line AF78 ($200) — left me slack-jawed with disbelief; its sound knocked my socks off, even amid the cacophony of noisy journalists.

What makes the AF78 unusual is its speaker arrangement.

Many mid-to-high-end canalphones are powered by tiny armature speakers, while moving coil drivers are found pretty much everywhere except the very high end. Armatures are generally better at producing clean highs and mids, but can lack deep bass; moving coils, on the other hand, are generally not as good at reproducing the clarity of an armature. But the AF78 is part of an elite group of models  — like the Scosche IEM856m I reviewed last year — that employ both a moving coil speaker and a balanced armature in each ear, in an attempt to give the listener the best of both worlds. And it works spectacularly.

END_OF_DOCUMENT_TOKEN_TO_BE_REPLACED 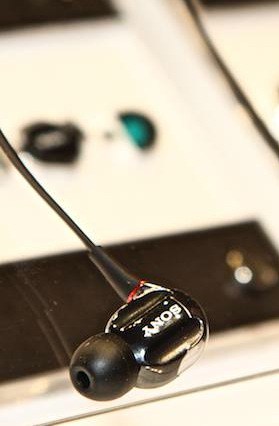 LAS VEGAS, CES 2012 – Amazing to think Sony has never offered an armature-driven earphone before; now that they are, they’re diving in huge time with eleven models. Aussie new kid on the block Audiofly just have one in their new lineup, but it’s a doozy, and it sounded absolutely stunning; we fully expect these to be a huge hit.