The computing universe was far different back then, and this groundbreaking little computer represented a major change from the status quo. Appealing to creativity and emotion, the Mac introduced the world at large to the Graphical User Interface, the mouse, and a computer that was friendly and non-intimidating. Many of those ideas became new industry paradigms and survive with us to this day.

Computers come and go, it’s a fast changing industry and the pace accelerates every year. But the Mac as a brand has survived 3 decades. This is notable for any product and unheard of for computers! Why, what’s so special? What’s the meaning of the Macintosh turning 30?

At its core, beyond basic utility, the Mac’s appeal to many people is that it has always been a device that people want to use, rather than something that you have to use. People get attached to their Macs the same way they get attached to their cars or favorite bands. You remember your first Macintosh – where you were at the time and what it meant to you. That was true with the original Mac in 1984, and it’s still true today. Macs aren’t just tools, but visceral parts of our lives.

‘Macintosh’ is more than a brand. It’s a word that equates computers with usability, form and function. ‘Macintosh’ is a trigger – a word that evokes a particular time in many peoples lives who were just getting into computers at college, introducing computers into their business for the first time. It’s always interesting to see how people refer to their Windows machines. I’ve never heard anyone say ‘I loved my old Windows laptop,’ but I’ve heard from countless people on the fond memories of their old Mac. Jonathan Zufi – Author of Iconic, a book about Apple design. 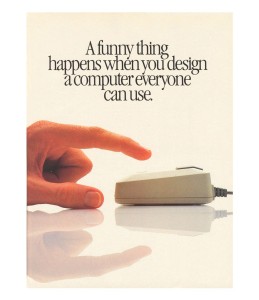 The Macintosh philosophy from the beginning has been computer as appliance. Plug it in, turn it on and get working. The industrial design of the computer and the graphic design of the software were designed to let you focus on your work, your output, your creativity.

The interface was intended to mimic a typical office so that you didn’t have to learn esoteric things like filesystems and text commands; instead you had a desktop, files and folders. The mouse allowed you to point at and interact with objects onscreen, and edited text was formatted as you watched in real time. You could name documents with more than 8 characters and using punctuation marks. That was revolutionary to most people.

I remember the thrill and the delight of using the Mac for the first time as a teenager. It was like playing with the iPhone for the first time; a total revelation. The interface was so natural, so easy to use. You didn’t need to be shown how to use it. You could figure it out yourself. That’s been Apple’s genius of course, all these years; to create interfaces that anyone can use without having to crack a manual. Leander Kahney – Cult of Mac

The original Macintosh design team made a lot of good technical choices, and many of their implementations remain in use to this day. Prior to the Mac, concepts like the Graphical User Interface and hand-held pointing devices existed only in the realms of research labs and high-end workstations. Easy printing and networking capabilities came standard with the Mac, and soon PostScript, PageMaker and the LaserWriter defined an industry.

Think about the graphical tool icons used in MacPaint, or the “marching ants” box around an object to signify selection – these items are so ingrained into our computing culture that we sometimes forget they debuted on the Macintosh in 1984!

This is a testimony to the insights and vision of Steve Jobs. He and the Macintosh Division got a lot right the first time. This is similar to the Porsche 911. It’s going on fifty this year. How many car models have gone on for fifty years? Guy Kawasaki — former Macintosh Evangelist

The Mac-PC wars are long over. Choosing a computing platform these days is like choosing a brand of automobile; they all get you where you want to go, so you choose on aesthetics, design details and performance. A saying I’m fond of repeating to my clients is: with Macs you spend more time using the tool, and less time keeping the tool running. And unless you’re a computer geek, that’s an important thing. 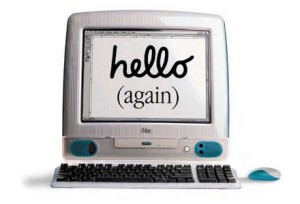 When Jobs came back to Apple his first new product was the iMac. A simple computing appliance, easy to use and pleasant to look at – the original Macintosh design concept modernized. It’s now the Honda Accord of computers, a stable product line with various changes throughout the years. Elegant, reliable and practical.

But not all Macs are family sedans. From the wicked fast Mac IIfx to the latest Darth-Vader Mac Pro, Apple can build muscle cars when it wants to. And sports cars – from the Powerbook to the MacBook Air, Apple’s portables define the computers you take with you.

In the Jony Ive era, style returned with a vengeance. Colorful computers, beautiful computers, thin and sleek. They look good in the home, objects d’art, as much as tools for work. But most importantly, they are still not intimidating. We really want to touch them.

Macintosh has survived so long because great ideas like great art or great music are timeless. Steve Jobs often likened the team’s creation to a work of art going so far as having the Macintosh team autograph the case as such. While the first Macintosh’s hardware was limited, Jobs’ vision was not. Eventually, the hardware and software would catch up to that vision and Macintosh would change computers forever. James Savage — RetroMaccast

Three decades later the modern Apple continues the legacy. The software has evolved with the hardware, and the modern Mac runs a very modern and stable variant of UNIX at its core.

Device dimensions have been drastically miniaturized while performance is maximized. iPhone and iPad, the offspring of Macintosh, take the computer fully mobile, utilizing direct touch controls to become even more integral parts of our lives.

That’s the thing about Apple products: these devices touch people lives. We like using them, we like owning them. Thirty years from now people will remember how they felt getting their first iPhone or iPad, or their first MacBook Air.

Can you say the same about your washing machine?

The Mac has lasted for 30 years because it set the standard. It showed the world how computers should work. And the same is true for the iPhone and iPad. They set the standard for multitouch tablets and phones. They’ll be around for the next 30 years; and I wouldn’t be surprised if the Mac is too. Leander Kahney – Cult of Mac

So what’s the meaning of the Mac turning 30? If you create something you love, execute it well, make it truly useful, and design it to be appealing, you can indeed change the world.

On January 24, 1984, Apple Computer introduced the Macintosh. On January 25, 2014, in Cupertino, California, the public will be invited to celebrate the extended team whose efforts popularized the graphical user interface and WYSIWYG software, defining computing for the rest of us. In honor of the 30-year anniversary of the Mac, the Computer History Museum, Macworld/iWorld and All Planet Studios are planning a celebration of this seminal computer and the original Macintosh development team.

The Mac 30th Celebration will be start at 7 p.m. on January 25. The Flint Center venue is just a few miles from the Apple campus, and the event is being held in the same 2,300-seat auditorium where Steve Jobs introduced the Mac back in 1984!

END_OF_DOCUMENT_TOKEN_TO_BE_REPLACED

If you love Woz (and who doesn’t?) we’ve got an extra special Friday treat for you.

Vince Patton emailed us, linking us to an incredible YouTube account filled with vintage videos of Apple co-founder Steve Wozniak talking to the Denver Apple Pi computer club back in 1984, in which Woz talks about being put on probation for computer abuse, hacking a video-on-demand box for free movies at a hotel, and how Steve Jobs coerced him to quit his cushy job at HP to make a go for Apple.

END_OF_DOCUMENT_TOKEN_TO_BE_REPLACED

Apple has produced some of the most memorable adverts in history. Its “1984” commercial for the original Macintosh is still talked about today, and we can all remember the “Mac vs. PC” commercials, and the dancing silhouettes that were used to promote the iPod. However, it hasn’t quite been the same story in recent years.

Despite promoting incredibly popular products like the iPhone and the iPad, Apple’s most recent commercials have been far from unforgettable. In fact, the CEO of one ad-tracking firm has revealed that Apple is being mocked for its latest Siri commercials, which employ celebrities to sell a feature that rarely works in real life.

END_OF_DOCUMENT_TOKEN_TO_BE_REPLACED

American television has been infested with ridiculous singing shows – American Idol, The Voice, X Factor, Sing Off, and now Duets. It’s become too much. Why won’t everyone just enjoy watching Walter White run his meth empire instead? I dunno, but the newest singing show, Duets, is looking to set themselves apart from other shows by ripping off Apple’s classic ‘1984’ commercial in order to get people to plop down and listen to Kelly Clarkson screech for two hours. Sounds like a great marketing plan.

Oh, and they got Jennifer Nettles to join the show too. I guess Toni Basil wasn’t available.

Steve Jobs dressing up as Franklin Delano Roosevelt to rally Apple’s troops is one of the weirdest bits of ephemera about Apple history.

The internal video — which followed Apple’s 1984 Super Bowl commercial and was meant to motivate Apple’s international sales force — features Jobs doing a bizarre caricature of the beloved four-term president that borrowed just as much from FDR’s real mannerisms as it did from Burgess Meredith’s interpretation of the Penguin.

How the heck did something this weird come about?

END_OF_DOCUMENT_TOKEN_TO_BE_REPLACED

Did you know that Steve Jobs played the role of FDR in a colossal World War II styled Apple commercial? We’ve seen glimpses of Steve in his FDR costume from a video made to celebrate Jobs’s 30th birthday, but we never knew the context of why Jobs was dressed up like the former-U.S. President until now.

After the success of their 1984 Super Bowl commercial, Apple created a broad-cast quality production titled “1944” that was designed to motivate Apple’s international sales force during a 1984 company meeting in Hawaii. Apple supposedly spent $50,000 on the production that used a mix of professional actors alongside prominent Apple figures. The 9-minute commericial uses a World War II theme to focus on the battle between Apple and IBM, with El Jobso taking up the mantle of FDR. The entire video is pretty bizarre and terribly corny, but definitely worth watching.

END_OF_DOCUMENT_TOKEN_TO_BE_REPLACED

Apple’s infamous 1984 advertising campaign for the original Macintosh needs little introduction from myself. The one-minute clip, which was inspired by George Orwell’s Nineteen Eighty-Four novel and depicts IBM users as mindless followers, was a huge success. So much so that the marketing guru behind it, Regis McKenna, believes it was more successful than the Macintosh itself.

END_OF_DOCUMENT_TOKEN_TO_BE_REPLACED

Apple launched its new ad campaign for the iPad 2 Saturday based on its founding philosophy of bringing technology to the masses.

END_OF_DOCUMENT_TOKEN_TO_BE_REPLACED

Proving that fact is always more interesting than fiction, ad man Steve Hayden remembers the making of Apple’s 1984 ad in AdWeek this week.

Marking the 27th anniversary, Hayden describes the utterly chaotic process behind the making of what’s been called “the best TV commercial ever.” Everyone hated it, and no one wanted it to run except Steve Wozniak, who offered to pay half the costs himself.

The first version of the spot was more Jetsons than Metropolis. The intention was to remove people’s fears of technology at a time when owning your own computer made about as much sense as owning your own cruise missile. We wanted to democratize technology, telling people that the power was now literally in their hands.