Update: Reader imajoebob has got a really funny response in the comments. Worth a read.

Trying to write this post on a Blackberry has taught me something, this thing’s web browser stinks. Now that the 3G iPhones will be on-sale in July, I’m gonna hafta break-down and get one. That said, only one-question remains: How to hide the purchase from my wife?

After the break, we’ll talk through my strategy, in the hopes that a fellow husband in a similar pickle might benefit from my experience, or maybe even able to help me devise a better strategy.

END_OF_DOCUMENT_TOKEN_TO_BE_REPLACED

Good heavens, but a lot can change when you get on one plane. I just arrived in Atlanta (friend’s wedding), hopped online, and the Intertubes have gone mad with credible leaks for the iPhone 2 that is universally expected to be introduced at Monday’s WWDC keynote. None of it is 100 percent confirmed, obviously (lots of commeters are skeptical about the missing lock button on the RED model), but these are much better than typical pre-keynote speculation. Here’s what you need to know:

Quite a flurry of activity. Only Steve will prove or disprove the accuracy of these reports.

With WWDC on the horizon, and keynote fever ramping up, we thought it might be nice to take a stroll down memory lane. The “One More Thing” timeline below covers every Stevenote we could find, focusing on the “Just One More Thing…” product announcement, with video clips for most of them.

Of course if we got anything wrong, or if you have additions, or clips we don’t have, please let us know in the comments, and we’ll get them added — Enjoy!

History of Just one more thing on Dipity.

It’s iPhone upgrade season. With the deluge of iPhone 3G rumors convincing just about everyone that now might be a good time to dump the old phone, in anticipation of getting one of the new models, here’s a tutorial to help you sell your iPhone safely, and get the best price.

END_OF_DOCUMENT_TOKEN_TO_BE_REPLACED

It’s WWDC time, only this year something is different. Where’s the wild speculation? If patent applications are any evidence, there are many cool things brewing in Apple’s lab —but all is quiet. Where’s the hype that precedes any Stevenote? Oh sure people are talking, but only about one thing: iPhone v.2.0.

Personally, I think this whole 3G iPhone business is a red herring. Sure, it’ll be announced, and people will love it. But the leaks abound so much. I find myself hoping that it’s part of a disinformation campaign; to keep us distracted so we don’t guess to closely at what new cool products Apple might unveil, and that there will be a terrific surprise for all of us at WWDC.

It’s been nearly a year and a half since the “Jesus-Phone” was announced at last year’s Macworld and since then it’s been: all iPhone, all the time, everywhere. I don’t want to seem to hate on the device; the defense will even go so far as to stipulate, your honor, that the iPhone might be best thing that’s ever been invented. But c’mon! Eighteen months after Prometheus descended from the heavens, I’m pretty sure folks were like: “Uh… yeah… fire… great…”

There is definitely more to talk about. There have been some great things come out of Cupertino this year, heck, there is a MacBook Pro that you can literally give the finger to, and it will respond accordingly. Yet it’s relegated to a footnote in technological history.

Now virtually everyone, including those villagers recently discovered in the Amazon, who have had no previous contact with the modern world, knows that the new iPhone 3G is coming out at WWDC this year. Yet, Steve rarely (if ever) uses the “Just one more thing…” part of the Stevenote to unveil a simple product update especially one so obvious (I know that a 3G iPhone, with GPS, and built in margarita machine is probably considered by some to be more than an update).

So what do you think? Other than a iPhone update, what else do you think Steve will unveil in his Stevenote? I know what I’m hoping for, but like the time I got up the nerve to ask out Sarah Andrews in 10th grade, I’m also steeled for disappointment.

UPDATE: RE: the comments below. I Photoshopped the image above for illustrative purposes. It’s not a spy shot. Also, my tipster said the iPhone will be subsidized, but he didn’t specify whether the subsidy will come from Apple, AT&T, overseas carriers, or all of the above. I can only guess that Apple will sell the iPhone 2 at a loss — to customers and carriers — and recoup the cost from monthly subscriber charges.

I just got a hot tip from a programmer at a major software publisher who claims to have seen the specs for the iPhone 2. This is unconfirmed, but according to the tipster, the iPhone 2 will be announced by Steve Jobs at Apple’s WWDC on June 9, and will much offer more for much less — and be thinner to boot. The iPhone 2 will have:

The tipster says Apple will subsidize the iPhone’s price to better compete with RIM’s Blackberry. The London Times is reporting the same thing — that the iPhone will cost about $200 in the UK when it goes on sale in July.

Blogger Jon Accarrino of Methodshop reports that lines are already forming in NYC for iPhone 2.0, which is rumored to be launched on June 9 (the first day of Apple’s WWDC and Steve Jobs’ opening speech).

Jon went by Apple’s 5th Avenue store this morning and found a line of about 50 people all waiting for iPhones — or so retail staffers told him.

Jon thinks the liner-uppers are already waiting up for the new iPhone.

Noting that many in line are Asian, Jon speculates they are from NYC’s Chinatown, and are being paid to wait in line. But I find it hard to believe that people are willing to pay a line-sitter for two weeks or more — especially when there’s no indication there will shortages, which prompted the lines first time around.

Reading between the lines of Jon’s report, I’ll bet they are being paid to snap up dwindling supplies of iPhone 1.0 to be sent overseas. As long as Apple places restrictions on the number of iPhones people can buy (currently 5) and there are not yet official channels, there’ll be demand for grey market iPhones. 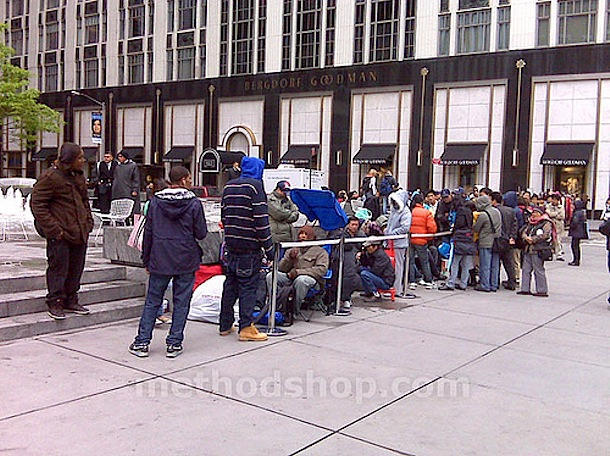 Pitting two great software bundles head-to-head in CultofMac cage match? What the heck, we have to do something to amuse ourselves until WWDC

Mac users this week are presented with two choices for bundles of shareware. The MacHiest bundle that includes 12 titles, bundled together for $49, and the MacUpdate promo that includes 10 titles for $64.99 (albeit 3 of them are locked until they reach specific sales numbers).

We get under the covers of these bundles to see which are worth your hard-earned duckets.

END_OF_DOCUMENT_TOKEN_TO_BE_REPLACED

John Gruber, writes today in Daring Fireball, an article about Adobe CS4 and the fact that while it will be 64bit on Windows it will only be 32Bit on the Mac. He writes (as usual) a simply wonderful analysis on the topic (well worth the full read), pointing out that lack of Carbon support in Leopard is making it difficult for Adobe (as well as some other cross platform vendors) to develop applications for both Windows and the Mac using the same code base.

… the degree to which Apple pulled the rug out from under Adobe’s feet at WWDC 2007 last June. When Leopard was first announced at WWDC 2006 nine months prior, it included full 64-bit support for both Carbon and Cocoa.64-bit.

Carbon wasn’t promised to be coming “sometime”, like with, say, resolution independence. It was promised for 10.5.0. And it existed developer seeds of Leopard up through WWDC 2007 had in-progress 64-bit Carbon libraries, and Adobe engineers were developing against them. Several sources1 have confirmed to me that Adobe found out that Apple was dropping support for 64-bit Carbon at the same time everyone else outside Apple did: on the first day of WWDC 2007.

If Apple had shipped Leopard with the 64-bit Carbon support promised at WWDC 2006, Photoshop CS4 would run in 64-bit mode on the Mac.

I’m not rushing right out to get my tinfoil hat, but this coupled with the new Aperture plug-in framework, really starts to make me wonder. The only question which remains is how might Apple augment its current suite of products to more fully take on Adobe (remember, in the software space, Apple grows as much by acquisition, as by innovation).
My bet, they acquire Corel, but I’d love to hear your ideas.

The general consensus is that Steve Jobs’ most recent keynote speech did not measure up to his typical standard. I’m not anywhere near so down on it (maybe because I didn’t go and only watched the online feed during stolen moments at work). This Joy of Tech trip sums up the sentiment pretty well. But you’ll have to click through to see the source of Steve’s sudden suck. Clever, gentlemen. Clever.