Like everyone else, I’m dying to know if Steve Jobs will be returning to work at the end of June.

Since I haven’t got a clue, and neither does anyone else, I figured I’d ask someone who might know. Not the usual blowhard pundits, but Barbara Courtney, a corporate psychic known as the “Seer of Silicon Valley.”

Personally, I’m very skeptical of psychic predictions, but Courtney has a long and storied history as Silicon Valley’s leading clairvoyant. Indeed, she’s the only person on record who correctly predicted Steve Jobs’ return to Apple back in 1997.

Speaking by phone from her home in Redwood City, Courtney said Jobs will return to Apple in June as promised — but he won’t stay long.

“My feeling is he will come back,” said Courtney. “I’m not seeing June as too soon.”

Jobs took six months medical leave in January saying his ongoing medical problems were “more complex” than suspected and he needed time off work to concentrate on his health. The company has promised several times that Jobs will return in late June as planned, but many are pessimistic.

On Tuesday, hopes were further dashed when Apple said the WWDC keynote in early June will be given by a team of executives led by head marketer Phil Schiller. The slot has traditionally been Jobs’, and many hoped (and are still hoping) he’d put in a surprise appearance.

END_OF_DOCUMENT_TOKEN_TO_BE_REPLACED

YouTube user LeopardOctober has posted videos, screenshots and information about Mac OS X 10.6 Snow Leopard on YouTube since mid-March or so, and in the last few days has put up some interesting clips of a few things we can expect to see when the new OS debuts June 8 at WWDC.

The first video above shows that users will be able to set the default behavior of Spotlight so that performing a search can ‘search this Mac’, search the current folder or use the previous search scope.

In the video below, we see users can assign an application to a space or all spaces, quickly from within the Dock.

LeopardOctober has several additional clips on the YouTube channel with embedding disabled, so you’ll need to head over there to check ’em out.

The videos posted are from fairly late builds of the Beta (10A261 and 10A286), which has reportedly been ‘frozen’ at 10A354 for the final release software.

With less than a month to go before the anticipated launch of iPhone 3.0 firmware and a widely expected upgrade to the hardware, widely reported claims by a poster on a Chinese Apple fan site suggest the next version of Apple’s revolutionary smartphone will sport a faster processor, more disk storage and a much improved camera, among other upgrades.

The next gen device will have a 600MHz processor (up from the current 400MHz unit), 256MB of RAM (up from the current 128MB), up to 32GB of storage, a 3.2 megapixel camera with autofocus, as well as a digital compass and FM radio, all while retaining the same battery, basic shape, and screen size, according to the poster, who claims to have a connection at Foxconn, Apple’s China-based OEM for the iPhone.

Could it be? If you’ve got your ticket to the sold-out WWDC ’09 coming up in San Francisco, you’ll likely be among the first to know. 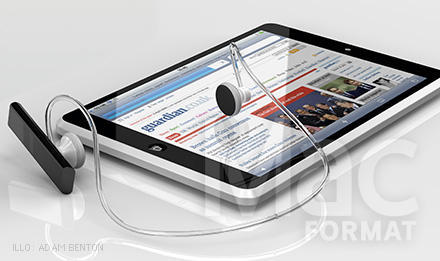 Though we’re still about two months from the WWDC keynote and new iPhone hardware, that hasn’t stopped the most audacious maker of iPhone knock-offs, HiPhone, from creating a rip-off of the still unannounced iPhone nano. Yes, meet the HiPhone nano. On the outside, it looks like an ancient iPod mini, if only Apple had no taste in colors. And then it flips open and has both a touchscreen and a keypad — an ungainly keypad with tiny buttons, at that.

I don’t know what the iPhone nano will look like, when and if it ever arrives. I don know that Apple would never in a million years ship anything like this. Thank goodness.

There are a number of excellent reasons to be bullish on Apple (AAPL) stock, according to Wall Street analyst Shaw Wu. Despite already having risen 45% on the year, Wu believes Apple could bake another 25% or more of profit into its share price, based on expectations around what the Kaufman Bros. high-tech analyst calls “several catalysts in the months ahead.”

“We anticipate [Apple’s] new iPhone 3.0 software to ship” in time for the 2009 WWDC in June, Wu said in a report released Monday. He’s also expecting consumer interest in Apple to remain strong with the introduction of new iPhone hardware, also in time for WWDC.

The expected launch of Snow Leopard should be a further catalyst for the Mac business, which has already seen a boost from recent desktop refreshes (iMac, Mac mini, and Mac Pro). “And last,” Wu said, “the potential for a new form factor, perhaps Apple’s answer to the netbook, with a large screen iPod touch-Mac hybrid” could end up pushing AAPL from its current $119 price to something more like $152.

Less than a month ago, on March 24, Wu removed Apple from his “Focus List” citing the appreciating stock (then up only 19%) and the fact that “many of the product catalysts we were looking for, namely the new iMac, have occurred.” But that was at a point just after the overall stock market had been tanking since January; in the last several weeks the market’s been on a tear and some in the financial analysis business believe the worst of the “recession” is behind us.

For a little more perspective on the inscrutable science of stock price analysis, recall that less than a year ago, when Apple was opening its AppStore and releasing the iPhone 3G, Wu and many other AAPL analysts expected the company’s stock to go as high as $225. AAPL had already topped out just over $200 prior to the AppStore launch and nose-dived to well below $100 by January of this year.

Apple has dropped “Mac” from the name of its operating system, filing new trademark applications referring to just “OS X.” The move could be just the latest effort to rebrand the overall company.

The move may have been made to distinguish the company’s OS X Leopard computer operating system and the OS X used by Apple’s iPhone, according to Apple Insider.

END_OF_DOCUMENT_TOKEN_TO_BE_REPLACED

1. He is genuinely funny. He’s been great in keynotes past, and he can easily carry a whole keynote alone. See Charles Arthur’s report from Paris Macworld in 2004, after Schiller stepped in for Jobs. The big surprise? Schiller was a gas: The dramatic news from the Apple Expo: Phil Schiller is *funny*!

2. He’s not Steve Jobs. He’s not perfect like Steve Jobs. He seems like a regular guy and a bit of a schlub — and I like that. Here he is at a programmer’s beer bash — the kind of event you could NEVER imagine Jobs attending.

3. He’ll deliver a great “One Last Thing.” Because of the controversy and disappointment surrounding the speech, Phil must go out on a high note. I’m hoping for a surprise appearance from Steve Jobs. Hopefully he won’t announce his retirement from Apple.

Phil Schiller has a posse; CC photo by JL! who snapped the poster near his office — no other info is given. 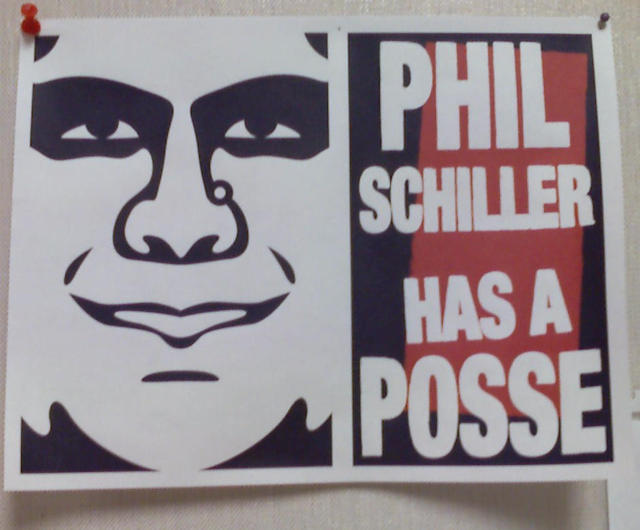 Apple’s decision not to attend Macworld might mean any of the following:

What Apple’s decision not to attend Macworld might NOT mean:

Meanwhile, keep injecting the rumor sites if that’s what grabs you. New Mac minis! Some kind of netbook! iPhones on skis! Yeah yeah yeah; it’s all just hot air and page impressions until Phil Schiller stands on that stage. And even after that, it’ll mostly be page impressions.

Although once famously proud of annihilating its R&D budget, it appears Dell is now in some cases reading from the Book of Apple, in taking existing ideas and–at least in some ways–improving them. In recent weeks, we’ve seen the Dell Dock, taking the UI device from OS X that’s loved and loathed in equal measure and adding handy auto-categorization. (And, yes, I’m well aware Apple didn’t invent docks, but if you’ve been paying attention, that’s kind of my point.)

However, while the Dell Dock is an interesting curiosity, the Studio Hybrid (depicted) is a rather more ballsy production, not only taking on the Mac mini and AppleTV, but exposing some of the shortcomings in Apple’s range of highly consumer-oriented desktop machines.

In terms of hardware, the Studio Hybrid is nothing new: Dell has shoe-horned a laptop’s guts into a small and fairly contemporary form factor. But when it comes to options, Apple’s machine is trumped in some key areas. Dell offers Blu-ray as an option (albeit with a $250 price-tag), HDMI video out, a card reader, and also pushes adding a TV tuner. (Amusingly, you can also add a bamboo shell for $130, which almost makes Apple’s black MacBook price-tag look sensible.)

Sure, there are compromises, not least the Dell lacking Mac OS X, the bizarre omission of wireless in the stock model, and the fact that on Dell’s online store, you have to click ‘Go to Next Component’ about 56 billion times to configure your unit (versus the streamlined and efficient approach taken on the Apple Store). But, to some extent, it does highlight the manner in which Apple is almost dropping the ball when it comes to living-room computing.

AppleTV shows promise, and the future of media is undoubtedly going to be centered around downloads. However, we’re not there yet, and people have too much investment in optical media. Therefore, AppleTV becomes an additional unit to homes already suffering from clutter under their televisions. And the mini, despite offering loads of potential, seems to have been practically shunned by Apple, banished to the corner like an unloved and unwanted child.

Rumors always abound regarding future Apple kit, with pie-in-the-sky wishes dashed by the brutal hand of reality upon an Expo or WWDC keynote. My wishes are rather simpler, though: a Mac mini that genuniely makes a play for the living room. Take a leaf out of Dell’s book, Apple, and bundle in that card reader, so people can more easily bung photos on their TV screen. Add that Blu-ray option for people who want to own media rather than rent downloads. And add HDMI video out by default, so people can connect their mini to a new TV without faffing about with additional leads.

Don’t worry about the bamboo option, though.