On Windows, when you’ve finished using a particular piece of software, you close it with the X symbol in the top right corner of the application window.

Many switchers assume that the window close control in the top left of an OS X application window does the same job: but that’s not quite true.

END_OF_DOCUMENT_TOKEN_TO_BE_REPLACED

Now you can carry around quotes like “The revolution is not an apple that falls when it is ripe. You have to make it fall,” from Che Guevara on your iPhone. (Irony not included.)

Guevara, launched Feb. 12 for $0.99 or €.79, is the latest app in the iTunes store to capitalize on lightning rod figures. Not to be confused with iChe, another Italian-developed app released four days later, Guevara features notable quotes from the Argentine revolutionary and guerilla war tactician in English, Spanish, French and Italian.

All of these apps were approved first for the Italian iTunes store but are for sale in others, including the US store, too.

The first of its kind was iMussolini, an app featuring famous quotes and speeches of the Fascist ruler. Despite a storm of complaints, iMussolini was only yanked for a week over copyright issues.  Once ranked no. 2 in the Italian app store, developer Luigi Marino tells us his creation has been dowloaded 8,000 times so far. It is once again for sale, along with another similar app of Mussolini’s speeches.

It seems there is a kind of double standard for quote apps of controversial figures: the US iTunes store features six apps of Dalai Lama teachings and quotes, but these were all removed from China’s iTunes store leading to cries of censorship.

The Guevara app, given a +12 rating for “mild or infrequent horror/ fear /violence themes”  was developed by two 30-something Italian IT consultants who have created another five apps on the iTunes store.

As far as we know, there have been no formal complaints to Apple about the El Che quote app. (Apple has not responded to our requests for comment).

Cult of Mac talked in exclusive with one of the developers of Guevara, Marcantonio Magnarapa, about an iPad version, the approval process and iMussolini.

Cult of Mac: How did you come up with the idea?

Marcantonio Magnarapa: We came up with the idea of a Che Guevara iPhone app while talking about the man behind the revolutionary –  inspired by the Steven Soderbergh movie, actually.

However you might feel about his actions, there is no doubt that his words strike a chord in every one, independent of the era or place. His thoughts are as relevant today as they were back in his day.

END_OF_DOCUMENT_TOKEN_TO_BE_REPLACED

But thanks to the absence of Apple this year, this “Mecca for Mac Heads” may be the last. So check it out while you can.

And here, in chronological order, is the top 5 things to do at the show:

END_OF_DOCUMENT_TOKEN_TO_BE_REPLACED

UPDATE: iMussolini Developer Luigi Marino told Cult of Mac that he discovered the lawsuit for copyright infringement by reading our story yesterday. Marino contacted the Italian state film archives, Istituto Luce, for clarifications about the video material he used from Mussolini’s speeches and they asked him to remove the app from the store to avoid a legal battle. Marino tells us he requested to pull the app and expects it to be gone from the iTunes store by 1 p.m. (CET).

An iPhone app of Benito Mussolini’s speeches is the second-highest paid app in the Italian iTunes store a week after launching despite criticism for giving voice to Il Duce’s diehard fans and claims over copyright violations.

iMussolini, a mobile compendium of fascism, features 100 complete speeches,  plus 20 audio and video clips for €0.79 (it’s also available in the US iTunes store for $0.99, in Italian only) — without any kind of political commentary.

At about 1,000 downloads a day, iMussolini is more popular in Italy than Shazam and games like Ice Age and Dracula: the Path of the Dragon.

Comments by readers on iPhoneitalia, which broke the story, included enough pro-Mussolini sentiment  “Duce! Duce! Duce!”  and slogans (“Boia chi molla!”) to prompt complaints to the iTunes store that the app violates Italy’s 1952 Scelba law, which formally abolished fascism. The New York-based American Gathering of Holocaust Survivors and their Descendants  also slammed Apple over the app.

Today, the Italian state film archives, Istituto Luce, announced it will sue the developer for using archival clips and asked Apple to remove the application. At this writing, the app is still available.

iMussolini is the handiwork of 25-year-old Luigi Marino, who picked up an iPhone for the first time about six months ago and made the app in his spare time.

Cult of Mac spoke to Marino about why iMussolini is an excercise in free enterprise, getting the app approved and why his next app may feature Gandhi.

CoM: How did you start programming for iPhones?

Luigi Marino: I’ve been programming Java and C++ since high school, in July 2009 I bought my first iPhone and  in November 2009 in my first MacBook.  Programming for it is more of a passion than anything else. (NDR: Marino owns and runs an unrelated company).   In my free time, I also blog for an iPhone website called dev app.

END_OF_DOCUMENT_TOKEN_TO_BE_REPLACED

Steve Jobs will never pitch a product more effectively than he did at the announcement of the iPhone. He said he was introducing three products: “A revolutionary phone, a widescreen iPod, and a break-through internet device. And they’re all one product: The iPhone.”

I thought back to that legendary pitch when I saw Steve affix one of his weakest lines ever to the iPad, a device I think actually has remarkable potential: 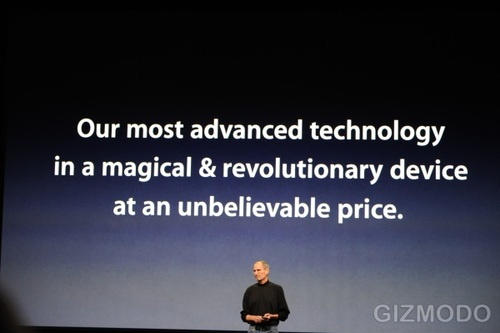 That’s right, the selling point is that it’s “Our most advanced technology in a magical & revolutionary device at an unbelievable price.” Really? Your selling points are advancement, magic, revolution, and cheapness? The best thing that line has going for is that device and price rhyme. First of all, almost no one buys magic. More importantly, Apple should never make price a central selling point; other companies can make cheaper knock-offs and then Apple has to re-convince people that that higher prices are justified. Once you try to become the price leader, you can’t really try to go premium again.

But the tagline was also a summation of the one problem that kept coming up for me as I watched the iPad announcement: the device simply does not have a killer app. A killer app, is the use that shows why a new technology is worth buying. For example, microwaves didn’t start selling until microwaveable popcorn was introduced and PCs didn’t sell until spreadsheet software was launched. The iPhone’s killer app, quite honestly, was Safari; the iPhone could certainly do a lot more than browse the web, but for many people, seeing the New York Times home page in multitouch made the sale.

The iPad? Well, I’ll say that the most impressive thing I saw today was the New York Times home page all over again. It’s even better than mobile web browsing than the iPhone. So what? That’s not enough to get me to spend $500. But not to worry. I believe the killer app for iPad is on the way, and possibly by launch. It’s called iLife.

END_OF_DOCUMENT_TOKEN_TO_BE_REPLACED

Remember way back in 2007 when Steve Ballmer famously yanked on his oligarch’s suspenders, chomped down on his cigar and told USA Today: “There’s no chance that the iPhone is going to get any significant market share. No chance?” Ballmer then went on to muse that Apple would only ever succeed in getting two or three percent market share, while Windows Mobile would own sixty to seventy percent of the market.

No. Wait. Stop chortling and high fiving each other for a second, I’m trying to make a point here: those are the words of a man who firmly believes his predictions. History has shown otherwise: Microsoft obviously got caught sleeping at the wheel when the iPhone came on the scene and utterly destroyed Windows Mobile’s place in the smartphone arena. Two years later, and Microsoft still hasn’t released a version of Windows Mobile that is even competitive with iPhone OS 1.0, let alone 3.0. But at least Microsoft is no longer feeling complacent about it: speaking to attendees of the Connect! tech summit in London, Microsoft UK’s Phil Moore made a frank appraisal of Windows Mobile when compared to the iPhone.

END_OF_DOCUMENT_TOKEN_TO_BE_REPLACED

Inspired (as legend goes) by a piece of pizza with a slice missing, Namco employee Tōru Iwatani first released the classic game Puck-Man to Japanese arcades almost thirty years ago. Later that year, Puck-Man came to the United States by Midway, although wisely renamed with the knowledge of just how tempting it would be to erase just a slight wedge of that first P‘s loop. The rest is history: America’s had Pac-Man fever ever since.

While the classic Pac-Man game has since been expanded into a franchise of quasi-sequels and spin-off titles, what you might not know is that original Pac-Man designer Tōru Iwatani never had any part designing the sequels until 2007, when he was invited by Namco and Microsoft to design a true sequel to his original game. The result was Pac-Man Championship Edition and it was the best Pac-Man games since Ms. Pac-Man. And now it’s available for the iPhone and iPod Touch for $3.99.

END_OF_DOCUMENT_TOKEN_TO_BE_REPLACED

It’s fall in the U.S., the leaves are beginning to turn color, but the deals keep coming. Today we highlight hardware, software and a discount duo for iPod touch owners. Apple is selling MacBooks starting at $849, while iPhone owners can grab Spore Origins for just a buck. Meanwhile, you can take a stroll through Mac hardware history with deals on early iMacs, PowerBooks and more.

For details on these and other products, check out CoM’s Daily Deals page.

END_OF_DOCUMENT_TOKEN_TO_BE_REPLACED

Based in NYC, Leibowitz’s pictures of the city look like a French Impressionist painted the scenes (hit the jump for more pictures). There’s nothing to indicate they were made using his iPhone and about $40 worth of apps from the App Store.

Leibowitz has a long history of using digital tools to make art. He started in the ’80s with a Polaroid camera. He’d hand manipulate the emulsion to create photographs that look also look like Imrpessionist paintings. But now he’s discovered the iPhone, and the results are not your typical iPhone art.

Hit the jump for some of Leibowitz’s latest pictures and an interview explaining how he makes iPhone art.

END_OF_DOCUMENT_TOKEN_TO_BE_REPLACED

A hacker claims to have broken into Steve Jobs’ private Amazon.com account.

The hacker is trying to sell details of Jobs’ Amazon.com account to journalists, including Jobs’ purchase history for several years and his credit card number.

According to the hacker, who identifies himself as “orin0co,” Jobs is an avid online shopper. Jobs has purchased 20,000 items from Amazon.com in the last 10 years, the hacker says. That’s 2,000 items a year, or more than 5 items a day, every day.

“I got myself a hold of this information,” the hacker wrote in an email sent from a secure Hushmail account. “No one else has it. I didn’t misuse it, otherwise Mr. Jobs would long ago change his login detail, wouldn’t he?”