Many of us have gumdrop iMacs sitting on our desks, too adorable to dispose of, too antiquated to be of any use. One of my New Year’s Resolutions, in fact, is to finally figure out what to do with my bondi blue iMac. My earlier thoughts tended to gravitate towards Hackintoshing the sucker into a competitive, modern machine, but tinkerer Klaus Diebel has screwed another notion into my brain: why not turn my gumdrop iMac into a coffee maker?

Of course, Diebel’s iMac CS is a lot more clever than just a coffee maker crammed into an empty iMac shell: it’s also a functional Mac, as well as a working, subwoofer-amped stereo system. It turns out that the Mac Mini’s optical disc slot lines up perfectly with the gumdrop iMac’s, with no other alteration necessary, so if you want to use the iMac CS as a desktop computer, all you need to do is hook up an external display and a mouse and keyboard. Why external? Because the iMac’s built-in screen now squirts out liquid joe. As for the JBR subwoofer, it beefs up the sound of the included Mac Mini, although if you attach an iPod to the iMac CS, it will automatically mute the Mac Mini and output your tunes through the iMac CS’s speakers, replete with sphincter-loosening bass… possibly messy funtionality, given all the coffee you’ll be drinking.

It’s a great little mod. Better yet, if you’re lazy, you can just pay Dubei to make you one, although you’d better be prepared to pony up: the raw materials of the mod cost between €300 and €400, even before you add in the price of the gumdrop iMac and the Mac Mini.

Cult of Mac reader Tiago Piccini from Brazil wrote in with yet another idea — following our posts on cat beds and hackintosh holders —  for recycling the shell of a dear, departed iMac.

He spent under an hour gutting his non-working iMac, then adding a lamp socket and switch device, powering it with a 40w bulb and adding a piece of fabric under the screen to soften the light. 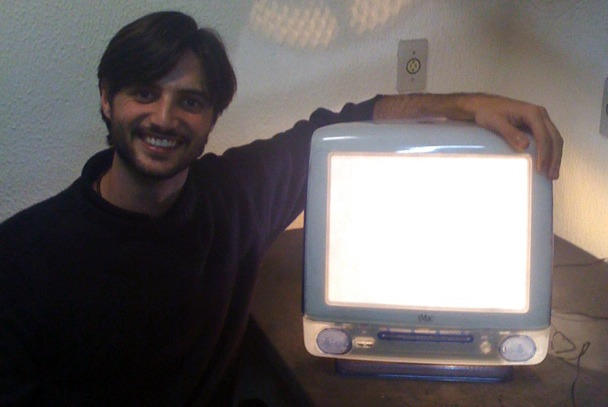 Piccini, who by day works at an Apple Solution Expert, calls his creation the iAbat-jour…It’s an easy DIY project that gives off a nice glow, no?

We posted yesterday that Apple and Psystar had reached a partial settlement in their age-old legal conflict over Psystar’s manufacturing and marketing of PCs with OS X pre-installed. The only thing up in the air was exactly how much those Hackintoshing upstarts from Florida would end up having to pay.

Now the number’s out, and it’s not pretty: Psystar has agreed to pay Apple $2.67 million dollars in damages.

END_OF_DOCUMENT_TOKEN_TO_BE_REPLACED

Florida-based Psystar and Apple will submit Tuesday a partial court settlement to the long-running Mac copyright-infringement legal battle, according to a report. Psystar, which had sold Mac clones based on Intel hardware with Apple’s Mac OS X operating system pre-installed, will pay unspecified damages.

The Cupertino, Calif. Apple has agreed to drop most of its legal challenge to Psystar, say reports citing documents filed Monday with a San Francisco court. The computer company also agreed to not pursue the damage award until all appeals are concluded.

END_OF_DOCUMENT_TOKEN_TO_BE_REPLACED

Here’s a guide for finding the best bargains on Apple-related gear during the infamous Black Friday sales on November 27. We’ve compiled a comprehensive list of gear from leaked photos of sales flyers and descriptions of sales.

We’ll continue to update this guide as more retailers announce their Black Friday offerings in the run up to the big day.

END_OF_DOCUMENT_TOKEN_TO_BE_REPLACED

Psystar, the unofficial Mac cloner, may actually have a shot at beating Apple, the Miami New Times reports in an interesting backgrounder on the two brothers behind the company, Robert and Rudy Pedraza.

The six-page profile includes several interesting factoids, including the revelation that their father is a convicted coke dealer.

The brothers started their knockoff business after one of them survived a near fatal car crash. The company is shipping boatloads of computers and is likely making money (quickly eaten by legal costs). Several copycats have cropped up, including the Moscow-based RussianMac.

To recap, Psystar sells cheap Hackintoshes that run Apple’s OS X. A Psystar machine costs about a third of a comparable offering from Apple, but runs OS X in violation of Apple’s shrinkwrap EULA license.

Apple is hell-bent on shutting the company down, but some IP experts think Psystar has a shot. The case hinges on the legality of EULAs — shrinkwrap licenses — that say you don’t own the software you buy, you license it. The legality of EULAs has never been tested in the courts, which makes the Psystar case so important. If Psystar wins, it may not only throw a wrench into Apple’s business model, it may alter the entire software industry.

The paper quotes a couple of intellectual property lawyers who say the tiny Florida company may actually win.

The Atom is the chip of choice in netbook hackintoshes, and many speculated that Apple was trying to kill the hackintosh market.

But Stell, the hacker who first sounded the alarm, now says support for Atom is mysteriously back.

“… in the latest development build Atom appears to have resurrected itself zombie style in 10C535. The Atom lives another day, but nothing is concrete until the final version of 10.6.2 is out.”

Apple appears to have frozen-out fans tired of waiting for an official Cupertino netbook, dropping support for Intel’s Atom processor from the latest build of Snow Leopard 10.6.2, according to reports. The move may signal Apple is clearing the way for its own netbook in tablet form.

For some time, Apple has dismissed the growth of small, low-powered notebook computers, refusing to join the army of computer makers producing so-called ‘netbooks.’ Apple COO Tim Cook described netbooks having “cramped keyboards, junky hardware, very small screens, bad software” and were not worthy of the Mac brand. In response to the lack of an official Apple entry, Mac fans have created hackintoshes able to run Mac OS X on netbooks using Intel’s Atom processor. Although 10.6.2 is currently only in the hands of developers, if the Atom omission is retained, the lack of support could either force OS X-based netbooks to vanish or restrict the hacked hardware to remain frozen at 10.6.1.