As assumed, Google announced yesterday that they have no interest in entering the mobile hardware game. There is no gPhone. Instead, the company took the wraps off of the Open Handset Alliance, a 30+ company coalition featuring software companies, handset makers, network operators, and web companies that claim to be committed to a genuinely open mobile phone platform.

That platform is Android, a linux-based operating system and software stack originally developed by a start-up of the same name that Google absorbed in 2005. Basically, if you license Android, you can power a cell phone. It’s everything except the phone itself.

It’s exactly what I hoped for. T-Mobile, Samsung, HTC, Motorola and others are on board, and this time next year, there could be dozens of Android phones on the market, each set up for total openness of software and all other features. It could be the iPhone without Steve Jobs trying to control everything about it. It could be high-end, low-end, mid-end, side-end.

On the other hand, this is a year off. We’ll see the SDK next Monday. Then it will move from vaporware to reality. Can’t wait.

As expected, Steve Jobs at a press conference in London this morning announced the UK iPhone will launch November 9th, use the O2 network, cost £269 and £35 a month for an unlimited data plan. The phone will be available at the Carphone Warehouse, at about 1,300 outlets.

The iPhone will be more expensive, £269= $537, and there’s no 3G — which is common in Europe. Jobs said it’s to save battery power. 3G chips would reduce battery life to just a couple of hours:

According to the Guardian’s liveblog:

“It’s pretty simple, says Jobs. “The chipsets work well apart from power. They’re real power hogs. Most phones now have battery lives of 2-3 hours and that’s due to these very power-hungry 3G chipsets. Our phone has 8 hours of talktime life. That’s really important when you start to use the internet and want to use the phone to listen to music. We’ve got to see the battery lives for 3G get back up into the 5+ hour range. Hopefully we’ll see that late next year. Rather than cut the battery life, we’ve included Wi-Fi and sandwiched 3G between Edge and a more efficient Wi-Fi.”

No announcement about other European countries, though it’s widely rumored it’ll be Orange in France and T-Mobile in Germany. Said Jobs: “We’ll be in a few countries in Europe in the next quarter.”

It’s still arcane and command-line driven, but the hackers at iPhone Dev Team have created an unlock application that’s free to the world. The iPhone can head to T-Mobile, Europe and the rest of the world…now.

All the details are here, but the rest of us might still want to wait for the GUI version. This is not simple stuff, and many report that YouTube gets broken. Still, I’d love to see this become so prevalent that Apple starts selling the iPhone unlocked out of the box. And while I’m at it, I would like American cell carriers not to suck, so I guess I can dream on…

And yet, it’s really taken until…uh, NOW, for widely available iPhone unlocking to arrive. iPhoneSIMFree is a $99 application that makes the iPhone work on any GSM carrier worldwide, including T-Mobile, where I’m stuck for the time-being. Visual Voicemail is broken off of AT&T, but everything else is just fine and dandy. Anyone ready to take the plunge now that the price is down and AT&T isn’t an absolute requirement?

At San Francisco’s Moscone Center West, Apple CEO Steve Jobs today met every bit of speculation that fans of the iPod had thrown in his direction in the week leading up — and then some.

The biggest news of the day is the iPod Touch, a virtual twin of the iPhone that eschews phone features and ramps up the multitouch multimedia features. The Touch carries a 3.5 inch screen on a body only 8 mm thick — even thinner than the iPhone. The device has 8 or 16 GB of storage and will sell for $299 or $399. 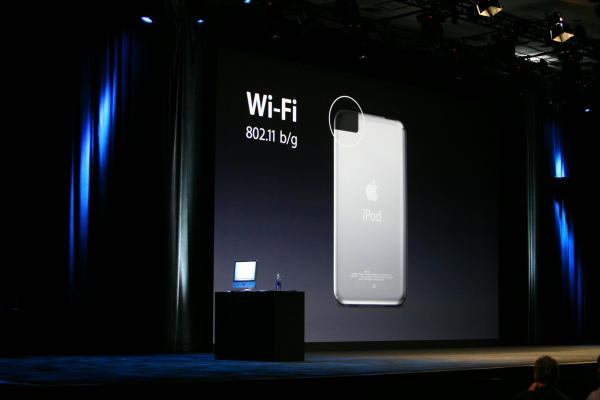 In a very surprising move, however, the device keeps the iPhone’s WiFi antenna and Safari web browser. It offers almost the full capabilities of an iPhone without the need for an AT&T account. In all likelihood, VoIP calling could be enabled with a microphone accessory, making this a true phone replacement for the adventurous. I had thrown this out as a possibility last week and dismissed it as cannibalizing iPhone sales too much. This is one gutsy move by Apple. 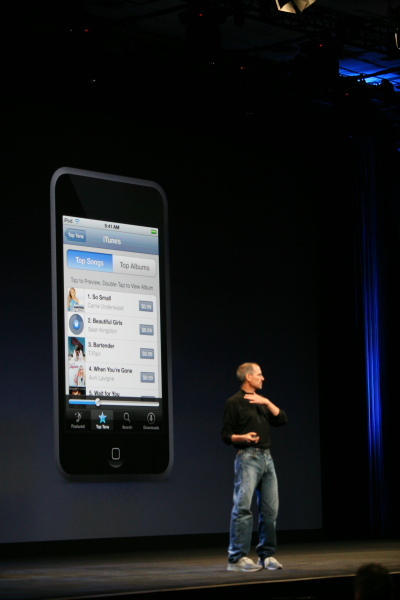 The device can even purchase songs and videos directly from a new WiFi-based iTunes Store that will now also be available to iPhone users. Anything purchased from the store syncs back to users’ computers. All content costs the same as it does on the full store, and everything available through the traditional iTunes store can be purchased from the WiFi store. Perhaps most bafflingly, Apple has a new partnership with Starbucks that will allow iPhone and iPod Touch users to press a fifth button in Starbucks stores to find out which song is playing in the store and instantly download it to their device if they like it. Users can see the last 10 Starbucks songs. Starbucks chairman Howard Schultz joined Jobs on stage for the announcement. Wifi iTunes Store connectivity is free at Starbucks — but not to the wider Internet, which will require a T-Mobile Hotspot account. 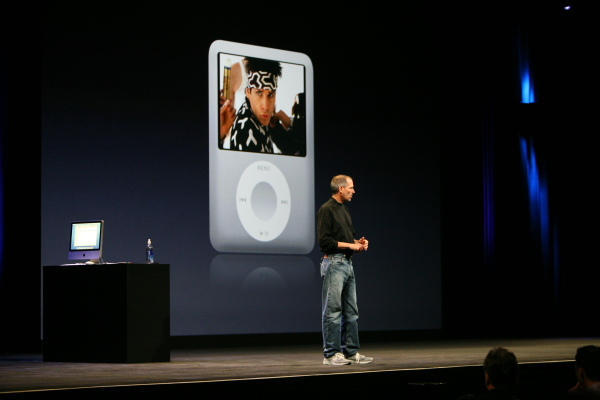 Jobs also announced the iPod classic, a revamp of the original iPod in a metal case at 80 GB and 160 GB, selling for $249 and $349 for those with bigger storage demands; oddly squat video iPod nanos at 4 and 8 GB for $149 and $199; color iPod shuffles at 1 GB in a (product) RED configuraiton; and 99-cent ringtones for iPhone.

Several hundred thousand people across the country are now happy iPhone users. They’re also all AT&T users, whether they wanted to be or not. Until Apple shipped their wonder-phone, I was never that interested in phones focused on e-mail and web browsing — then it all changed. However, as a T-Mobile user, my options are limited. Much as I would like to say I’m glad that my service agreement will force me to wait until at least the second-generation iPhone, I’m not. I want a great phone. And so I headed to the T-Mobile store yesterday, in search of hope. And I found none. To read the gory details, hit the jump.

END_OF_DOCUMENT_TOKEN_TO_BE_REPLACED

Jon Lech Johansen, the 23-year-old who first cracked the CSS encryption screen for DVDs when he was 15, has now discovered a method for activating the iPhone without registering with AT&T at all. With the help of a little Windows application called Phone Activation Server and a few “magic numbers” Jon posted, Apple’s amazing new device wakes up as a touchscreen iPod and WiFi-enabled Internet device — that, of course, can’t make phone calls. With this, I think it’s safe to assume we’ll see an unlocked iPhone running on T-Mobile or one of the European carriers very shortly. I know there’s a lot more to it, but people are really honing in on the secured side of the iPhone now. Still, it would be nice if the cracks were written for Linux and Mac OS X instead of .NET…

Well, it turns out there was no need to camp out for an iPhone, at least in San Francisco. When I finally rolled into the Apple Store in Union Square at 7:30 p.m. on Friday night, Apple had plenty of boxes still on hand…not that my T-Mobile-using butt was going home with one. Still, I had a lot of time to play with an iPhone all to myself (and observing my fiancee doing her own experiments), and I have some early thoughts and a few discoveries I haven’t seen anywhere else on the Web yet). Read on for more.

END_OF_DOCUMENT_TOKEN_TO_BE_REPLACED

If you’re among the many people in the United States who either can’t use AT&T/Cingular or choose not to use the carrier’s services based on negative experiences, take heart — there still might be a way to use an iPhone without the company’s blessing. The iPhone ships in four weeks. And though Apple is officially keeping the device exclusive to AT&T for five years, never underestimate the black market for unlocked phones.
According to Ars Technica, Pure Mobile is now claiming it will sell unlocked iPhones for an undisclosed (read: EXORBITANT) rate almost as soon as the devices hit the market. As a T-Mobile user, this is very heartening news, but I can tell you there is no way I’m going to spend $1,000 or more for an iPhone. Maybe when the iPhone nano hits in two years, and someone unlocks that…
Anyone willing to take the unlocked plunge?

Remember that totally awesome touchscreen demo at huge scale that had broad applications such as natural photo sorting and editing and fingerpaints? Well, in advance of the D Conference today, Microsoft decided it would be a good idea to launch a product line that is…exactly that demo. They call it Surface, and if it lives up to the demo videos on the official site, it will be spectacular in use.
T-Mobile, Harrah’s Entertainment and others plan to roll them out very quickly. You might be playing with one in a few days. So what’s the problem? Why isn’t Apple panicking? Because this is as far from a consumer application as you can get. A 30″ touchscreen display built on a coffee table in the living room is years away from being something people will buy.
Granted, Apple’s multi-touch product, the iPhone, is also very high-end, but a $600 phone is closer to reality than the Future Table 6000. Don’t get me wrong. I’m sure that Microsoft will make money from this selling to stores and casinos. There are many people looking for an interactive table for what I would assume is at least $10,000, if not more. But this is like a new pinball machine, not a technology that will make an impact at home for years to come.
It is an amazing demo, but it’s far from ready for prime-time. This is for an exciting display in a store. The fact that MS isn’t talking about rolling this technology to other platforms yet indicates that they’re not playing for those markets. And I will pit the iPhone or a touch-enabled iPod against a to-be-announced Surface Zune any day. If anything, launching this way is a sign that Microsoft knows it doesn’t have a product to compete with the iPhone ready to go. So they brought out the circus edition of the technology.
I’m sure the clowns and the elephants are psyched.
Microsoft Surface: multi-user touch table [MacNN]