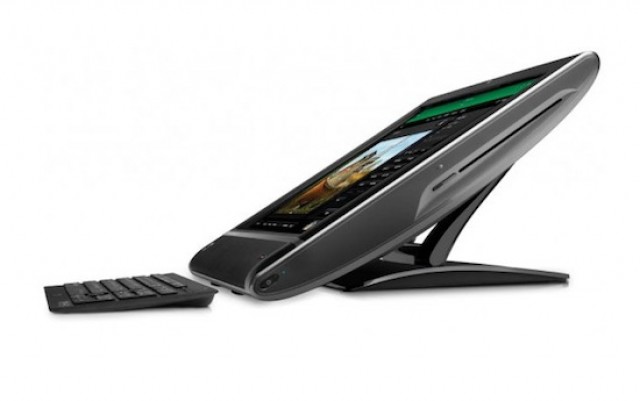 When he first showed off OS X Lion last year, Steve Jobs explained Apple’s reluctance to add multitouch displays to their line of iMacs by saying that multitouch needed to be horizontal to be pleasant to use. Use it in a vertical position and you’re always leaning forward to poke and prod the screen, leading to what Steve Jobs calls “gorilla arm.” That’s why Apple has only brought multitouch to the Mac through peripherals like the Magic Mouse and Magic Trackpad. Even so, some patents have shown up over the past year that suggest that Apple’s been experimenting with multitouch-capable iMacs with pivoting displays that pull down to a more appropriate horizontal orientation when a user wants to interact with on-screen elements directly.

If you want to see what such an iMac might look like in the flesh, though, check out HO’s latest TouchSmart PC. Look familiar? Yup, that’s right: it features a pull-down design that drops the multitouch display into a horizontal position to reduce arm fatigue… just like in Apple’s patent!

END_OF_DOCUMENT_TOKEN_TO_BE_REPLACED

It looks like Nvidia’s fastest graphics cards could be headed for the Mac — courtesy of an unofficial hack.

The Russian hacker known as Netkas has hinted that he’s cracked Nvidia’s Fermi ROM, the firmware underlying its most powerful cards, which are currently Windows-only.

In a post titled “On the mac’s fermi ROM,” Netkas posted a winking smiley face — a hint that he’s cracked the drivers for Nvdia’s most powerful line of graphics cards.

Given the hacker’s reputation, it is “certain that he has found a way,” says HardMac, which follows graphics hacks closely. Hardmac reckons Netkas was able to adapt the ROM of Nvidia’s Quadro FX 4000, which has Mac drivers.

HardMac is hoping to see Mac ROM for Nvidia’s GTX 580, the most powerful Fermi card available.

There’s a thriving hacking underground that unofficially adapts Mac drivers for Windows PC cards, which are usually much cheaper than their Mac counterparts.

Yesterday, Steve Jobs took the stage for the Back to Mac event and finally put the kibosh on the idea of touchscreen iMacs. He made some excellent points: namely, that multitouch really requires a horizontal configuration instead of a vertical one, making it only a really pleasant-to-use experience on a device like a tablet or smartphone.

Makes sense to us.If you’re just dying for the touchscreen iMac experience, though, why not transform your iPad into a semblance of one with the PadDock, which will turn your iPad into a tiny approximation of a 10-inch iPad. It contains built-in speakers, 360 degrees of rotation and the ability to charge and sync your iPad while it’s connected.

I mean, look: the PadDock is really just an iPad speaker dock with a novelty shape. That’s cool, but you may well not want to spend $100 on it, especially since the iPad in a vertical docking configuration is going to be subject to the same ergonomic difficulties Steve Jobs says is stopping Apple from bringing multitouch to the displays of their laptops and desktops. But take a good look anyway,because this is the closest to a touchscreen iMac you’re going to get this short of a really ingenious Hackintosh.

Apple’s guillotine-thin ultraportable laptop, the MacBook Air, is disappearing from shelves all around the country, as reports indicate that the low-end 1.83 GHz and the high-end 2.13 GHz are out of stock pretty much everywhere… and it may very way herald the imminent arrival of a smaller and svelter 11.6-inch MacBook Air.

END_OF_DOCUMENT_TOKEN_TO_BE_REPLACED

Last month, the always somewhat suspect Digitimes asserted that Apple intended on going head-to-head with the netbook market by releasing an 11.6-inch MacBook Air something later this year. Here’s one fan’s wishful thinking Photoshop on what such an Air might look like.

There’s nothing too hard to buy about the way Apple would choose to layout the keyboard on an 11.6-inch MacBook: as netbooks have shown, twelve inches is the sweet spot when it comes to not compromising keyboard size. Nor is the trackpad hard to swallow, given the fact that Apple will doubtlessly eliminate the physical button from future Air trackpads.

Making the Air even thinner seems like a pipe dream, though: Apple’s not about to switch over to an Atom chip, which means a thinner Air would come at the expense of battery life. And where’s the black glass bezel that Apple’s favored for all of their modern computer designs?

Still, I’d buy a smaller Air if the price was right and Apple could match the existing MacBook line’s battery life: my Hackintosh netbook is getting woefully long in the tooth.

Hey, there’s no denying it: these cases are nice. The $12 Socket is a simple padded pouch that will protect your Magic Trackpad’s glass surface from key scratches and the like, while the $25 Slip is a ballistic nylon case with a lightly padded liner and multiple trim options. Like I said, nice…. but who is taking their Magic Trackpad on the road with them? It’s a desktop device: your MacBook already has a Magic Trackpad built into it.

I was ready to delegate this conundrum to the Department of Redundancy Department, but then I actually opened my MacBook for the first time in a couple of weeks and realized how luxurious that 80% larger Magic Trackpad really is. It’s pretty hard to go back…and don’t even get me started about the postage stamp sized trackpad of my Hackintosh netbook. So maybe I do want to take my Magic Trackpad out on the road. I guess that means I need a case.

Once infamous Hackintosh manufacturer Psystar’s name is popping up again in the newsfeeds. That’s discordant enough to have me tapping the flux capacitor trephined into my right temporal lobe like a faulty odometer: is it somehow 2009 again?

But nope, Psystar’s well and truly back after filing an Opening Brief with the Ninth Circuit Court of Appeals, asking them to overrule the order that has prevented the company from making Mac clones.

According to the Mac Observer, Psystar’s strategy is “getting the court to adopt a radical revision of the Copyright Misuse doctrine that would in effect destroy copyright and force all copyrighted works to be licensed.”

END_OF_DOCUMENT_TOKEN_TO_BE_REPLACED

Jon Berg injected some fresh life into his broken 17-inch iMac G4 by cramming a touchscreen PC’s guts inside and re-skinning the desktop to resemble OS X.

I wonder, though, why he didn’t decide to make it a dual-boot hackintosh. Windows 7’s multitouch is a total hack job. It’s hardly worth sacrificing OS X as your day-to-day operating system.

END_OF_DOCUMENT_TOKEN_TO_BE_REPLACED

The techno-sweatshops of Beijing have never seen an Apple design they weren’t willing to ineptly rip off, but these MacBook Air knock-offs spotted by M.I.C. Gadget are the first I’ve actually liked.

Basically, what we have here is a white plastic simulacrum of the MacBook Air’s aluminum unibody chassis, crammed with the innards of your stock, last generation netbook: an Intel Atom N280 processor with up to 2GB of RAM and a 320GB hard drive.

I love it, right down to the lid’s pulsing, multichromatic logo! If Apple ever introduces a plastic unibody Air, this is exactly what I would imagine it looking like. It’s unfortunately a Windows machine, but at around $249 I’m tempted to pick one up anyway, just to see if it’s as easily Hackintoshable as my Asus Eee PC 1000HE. What a coup one of these MacBook Air netbooks with Snow Leopard installed would be for my gadget cred next time I showed up at the blogger’s hall at CES.

For the crime of selling Hackintoshed PCs with OS X pre-installed, Florida-based Psystar, Inc. got the sort of suing from Apple usually consigned to the pages of slash fiction written by the most depraved of litigation fetishists. If the word “reaming” can be used in polite society, that’s what Psystar got, and from the resulting hole agape Apple’s lawyers reamed out every last, ill-begotten penny.

Needless to say, Psystar’s now resorted to rattling around the Web 2.0 equivalent of a beggar’s tin cup as they plead for alms. Since they can no longer sell their line of Mac clones to make money, and since they appear to have decided not to risk Apple’s wrath further by selling their Rebel EFI software until the courts have clarified its legality, Psystar is now asking for $20 to $100 donations on their website.

If charity isn’t your bag, they’re also selling t-shirts for $15. The t-shit reads “I sued Psystar” on the front and “…and all I got was a lousy injunction.” on the back. It’s sort of a nonsensical slogan, unless Steve Jobs buys one of these, but it’s also flat-out misleading: Apple was awarded $2.7 million in damages from Psystar, which they have presumably yet to pay.

Finally, Psystar have announced their new business plan, taking the injunction into account. It’s smart: they’ll basically sell desktops that are built using only components that have Snow Leopard drivers available for them, leaving it to the end user to install OS X on the machine, or not, as they see fit. In other words, they are still targeting the Hackintosh community, just legally. It’s a good idea. I bet they wish they’d done that in the first place.