We’ve seen famed Apple concept designer Martin Hajek’s take on Cupertino’s possibly mythical, believed-to-be-forthcoming iWatch before, but that was before iOS 7 came along. So Hajek decided to adapt his design for the post-Forstall age.

The result? The iWatch S and iWatch C, which have not only been updated to support iOS 7 (at least in Hajek’s head), but which have taken some new design cues from the iPhone 5s and iPhone 5c.

END_OF_DOCUMENT_TOKEN_TO_BE_REPLACED

In the Mac space, Dutch designer Martin Hajek is the crown prince of concepts, having done some of the most realistic and jawdropping renders we’ve ever seen for the iWatch, Mac Pro, iPhone 6 and more.

One product concept we thought Hajek bit the pooch on a little, though, was his idea of what an Apple HDTV would look like. His concept was black, chamfered and gorgeous… but also looked like Martin Hajek had never used a television in his life. But here comes Hajek’s Apple HDTV, Mach II… and this is an Apple television set I would buy.

END_OF_DOCUMENT_TOKEN_TO_BE_REPLACED

We’ve barely had the iPhone 5s in our hands for more than a month, but is it too early to start dreaming up what the next iPhone will look like?

Recent rumors have claimed Apple will beef up the screen size on the next iPhone to 5-inch, so one of our favorite concept artist, Martin Hajek has released some new concept images of a golden iPhone 6 that sports a 4.8-inch screen by upgrading to an edge-to-edge display so that the size of the iPhone doesn’t get bigger as well.

The mockup is missing Apple’s fancy new Touch ID feature which will undoubtedly be available on the iPhone 6 and future iPhones, but the all-metal backing and thinner design would be excellent improvements to go along with a bigger display, even if you hate that its dipped in gold.

Here are a couple other looks at Martin’s gold iPhone 6 concept:

END_OF_DOCUMENT_TOKEN_TO_BE_REPLACED

The iPad 5 is set to be unveiled on October 22nd, but thanks to all the leaks of rear shells, displays, and more, we pretty much already know what its going to look like when Cookie finally drops the curtain next week.

However, if you’re just dying for more glimpses of Apple’s new tablet before it comes out, our friend Martin Hajek has got you covered with these new renders that show what Jony’s latest slab of silicon, glass and aluminium will look like once its resting peacefully in the Apple Store sanctuaries.

END_OF_DOCUMENT_TOKEN_TO_BE_REPLACED

We haven’t seen any gold iPad mini 2 cases leak yet, but now that Apple’s announced the gold iPhone 5s, could a golden iPad mini with Retina display and Touch ID be on the way?

Our favorite Apple concept artist, Martin Hajek, has created a new gallery of mockups that showcase a gold iPad mini next to a space gray iPad 5, both of which are also rocking Apple’s fancy new Touch ID sensor. While we doubt Apple will release a gold iPad mini, a gold iPhone sounded crazy just two months ago, so maybe Apple will surprise us again.

Would you be interested in a gold iPad? Take a look at the pics below and tell us your thoughts in the comments:

END_OF_DOCUMENT_TOKEN_TO_BE_REPLACED

We’ve already explained why the iPhone 5S will probably feature a redesigned home button with a fingerprint sensor, and now concept designer Martin Hajek has given the idea a proper treatment in Photoshop.

Hajek consistently makes some of the best Apple concepts around, and these are no different. His imagining of the ring around the home button looks great, and while the actual product may not look exactly the same, the concept gives a nice visual representation of what is being rumored.

END_OF_DOCUMENT_TOKEN_TO_BE_REPLACED

Fans across the globe have already embraced the idea that Apple will most likely release a smartwatch, but the biggest question everyone has is, what will it look like?

Artists and designers have been trying to imagine the design of the iWatch for a few years now and while no one has really blown us away with a perfect concept, we have seen some timely ideas that Apple will probably implement. To get a better idea of how the iWatch will look, function and feel, take a look at these six concepts. 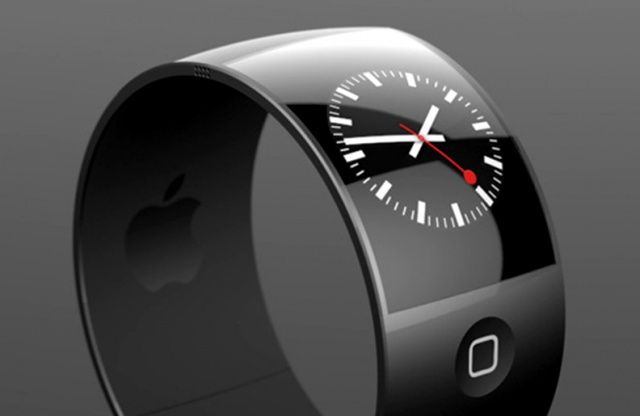 When design engineer Esben Oxholm created his iWatch concept he decided to make it as simple as possible. It features a black metal and rubber wristband. The display is shiny while the body is matte. And it has the rumored curved display. Apple’s iWatch probably won’t be as circular, but the minimalist look that Oxholm achieves will also be Apple’s aim as everything about the watch will defer to the screen.

Oxholm’s concept is probably the closest to what the iWatch will actually look like, though we imagine that Apple’s watch will be more oval in shape rather than a perfect circle. This concept almost looks like a bulked-up Nike Fuelband, which isn’t outside the realm of possibility. Tim Cook sits on Nike’s board, after all. 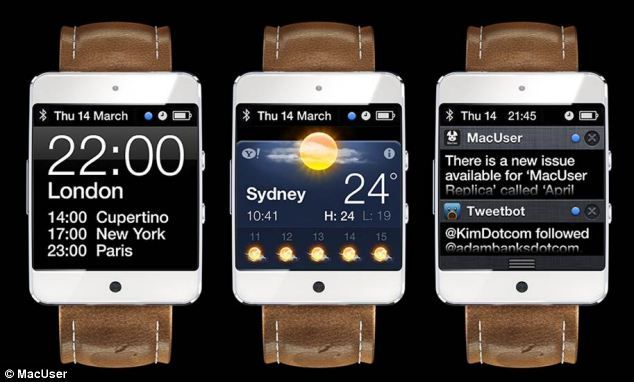 Created by Dutch 3D modeler Martin Hajek, this MacUser iWatch concept tries to embrace traditional elements of watches while updating the technology of the watchface. In truth, Martin’s concept looks like a miniaturized iPhone strapped to some leather, but it gets a time out because of the UI.

The iWatch will have a touchscreen display, however, no one is going to want to interact with the display for extended periods of time. Our fingers are too tiny to hit the small X’s on this iWatch’s screen. The iWatch will be used to display information, but it won’t be used to interact with that info. Your iPhone will do all of the heavy lifting, while the iWatch acts as a secondary display to alert you of the most important information throughout the day. 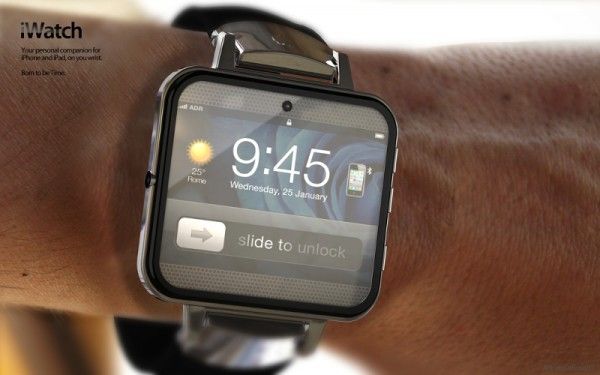 ADR Studios has made a couple of iWatch concepts, but this is their best one yet. The size of this concept iWatch is pretty small so it won’t feel like you’re wearing a computer on your wrist. Apple’s design team is obsessed with having the thinnest, lightest and smallest devices on the planet, so even though Apple will try to cram as many features into the iWatch as possible, it will also want to make a very small device. The actual face of the iWatch will probably be somewhere around this size unless Apple works out a curved display for it.

The UI for ADR Studios’ concept is one of the most on point we’ve seen so far. Notice that there is a small icon indicating that the iWatch is tethered to an iPhone. The ‘Slide to Unlock’ feature probably won’t be as big as it’s portrayed here, where it eats up half the screen. The iWatch display will take advantage of all available screen real estate even when it’s locked, so expect there to be bigger font for the time and a more elegant solution for unlocking. 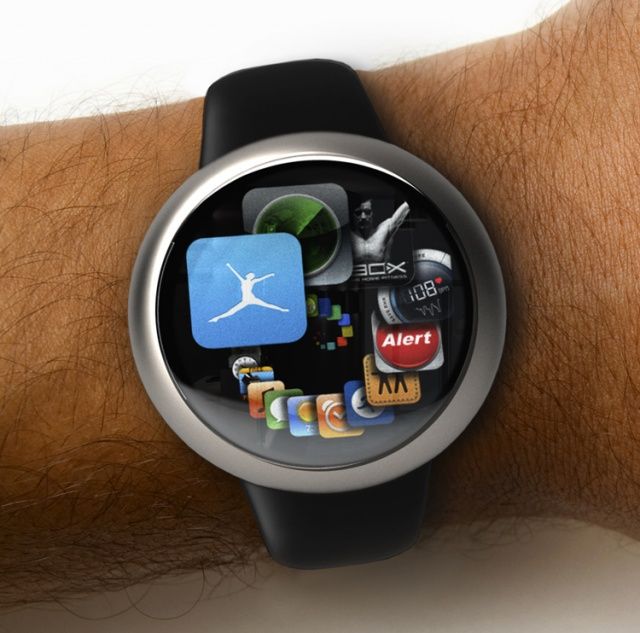 One thing that a lot of iWatch concept artists haven’t taken into account is the user interface. Most assume that the UI will be a watered-down version of  iOS, but Nikolai Lamm offers a different take. Rather than interacting with your iWatch the same way you do an iPhone, it might actually be closer to the controls of the iPod classic.

Lamm’s spiral interface is based off an Apple UI patent for iTunes and would appeal to people who want the look of a classic watch that interacts with an iPhone. The circular finger movements required to interact with Lamm’s iWatch would compliment the design of the hardware and you would only need to touch your device when you want to adjust notification settings for certain apps, while everything else is controlled from your iPhone.

The display of the real Apple iWatch probably won’t be circular like this, but you should expect some new UI from Apple as the iWatch will be a completely new device with new functions not yet in iOS. 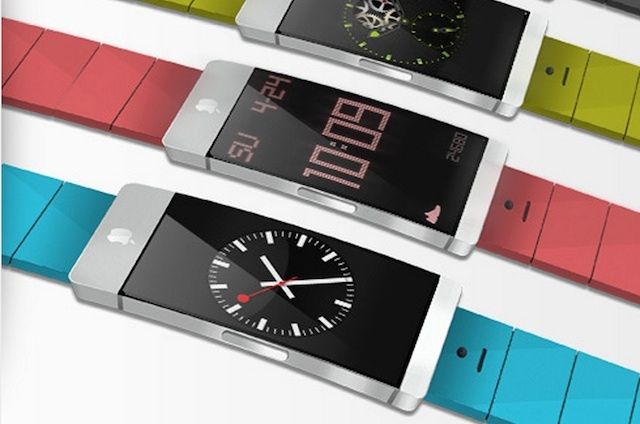 With the sixth-generation iPod Nano, Apple embraced the idea of the iWatch and offered multiple clock faces and wrist bands to convert your iPod Nano into a watch. Expect the real iWatch to come with similar features.

The concept from Just Design Things for the iWatch has swappable wristbands and clock faces so that users can customize their look. Even if the iWatch doesn’t offer changeable Swatch-like wristbands, Apple will at least offer it in multiple colors. The display of this concept looks too heavy and bulky to be worn comfortably as a wristwatch though, so we think it’s more likely that the display will be built right into the band to make it more comfortable for everyday use. 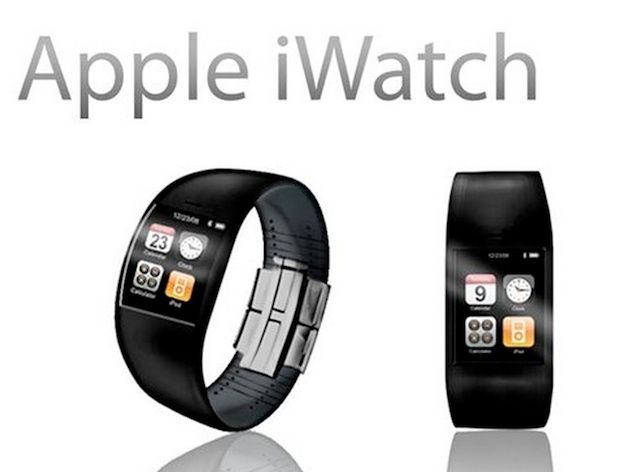 For this iWatch concept, artist itswithaKay modeled the watch after Nike’s Amp watch and added some iOS elements. It sounds too simple to be plausible, but we already know that Jony Ive and his design team requested a number of sport watches from Nike to study.

The iWatch has to have a durable design. Unlike the iPhone or iPad, the iWatch must take a licking and keep on ticking, so a thick rubberized band will help resist some of the wear and tear. Also take note of the tapered band on this concept. It allows enough width for a display while also being comfortable for the wearer. The display will probably be a bit bigger than in this concept, the UI will be different along with the clasp in the back too, but the physical outline of the iWatch will be pretty similar to what you see here.

Although we expect the iPhone 5S to look a lot like the iPhone 5, there may be one model that won’t be confused with its predecessor — a white and gold one. It’s been the subject of countless rumors in recent months, and this photo, posted to Chinese social networking site Weibo, could prove it’s real.

END_OF_DOCUMENT_TOKEN_TO_BE_REPLACED

Scarcely a day goes by that Martin Hajek does not open up AutoCAD and feverishly model something he thinks Apple might be working on, and today, it’s the colorful box of Apple’s so-called “budget” iPhone, the equally so-called iPhone 5C.

The new Mac Pro looks incredible. It’s simple, compact and elegant, yet packs enough horsepower to do some serious work. Even though we don’t know what its final price tag will be, there’s one addition that could definitely improve upon the design of the Mac Pro: glass.

Concept artist Martin Hajek created some new mockups of what the Mac Pro would look like if its beautiful guts were on display through a glass case, and the final results are pretty incredible looking: