Is this the Dock Connector for the iPhone 5 with its viscera hanging loose? Taiwanese site Apple.pro certainly thinks so, and as the guys who first posted pictures of the touchscreen to the new iPod Nano, they’ve got a decent history of getting their hands on parts of unannounced Apple products. So maybe!

The new Dock Connector is slightly narrower than the part found in the current iPhone, and is part number 821-1300-02, compared to 821-1281-A for the Verizon iPhone. It certainly looks legit, even if it doesn’t tell us much except that the next iPhone will be a smidge thinner.

END_OF_DOCUMENT_TOKEN_TO_BE_REPLACED

Over at The Loop, Jim Dalrymple is contradicting today’s reports that both the iPhone 5 and iPad 2 might be delayed by three months each, saying that both products are “on schedule” according to his own sources.

Of course, what “on schedule” means depends on where you’re sitting. They still might ship three months later than expected.

END_OF_DOCUMENT_TOKEN_TO_BE_REPLACED

Fast Co.Design has a very interesting Apple history artifact posted up today: the birth of the Mac, as told by Jef Raskin, the late founder of the Mac project. Jef’s son Aza wrote the piece and provides scans of the original document if you’re into authenticity instead of legibility.

It’s worth noting before you dive in, which I highly recommend, that Raskin’s vision for the Mac was very different from what Apple actually produced once Steve Jobs took over the development team. Raskin wanted the most unified hardware and software imaginable. One screen, one keyboard, one processor, one memory configuration, no expansion slots, one box. Oh, and he wanted a printer built into the box.

He also wanted to get rid of all modality in a computer. So, for example, if you started typing, the word processor would open and capture what you were typing (rather than having Clippy note that you’re writing a letter). A lot of that stayed in, but Jobs made it much more powerful and, ultimately, diverse and fragmented a platform than Raskin ever envisioned (see the Canon Cat for that).

As Aza Raskin notes, his father’s philosophy is much closer to what’s going one with the iPhone and the iPad. After all, you can have any iPad you want, so long as it comes in brushed aluminum.

This item of controlling appearance is quite significant: for example it is impossible to write a program on the Apple II or III that will draw a high-resolution circle since the aspect ratio and linearity of the customer’s TV or monitor is unknown. You can probably promise a closed curve, but not much more. You cannot promise readable characters, either. Therefore, a predictable, documentable system must be entirely under Apple’s control. LISA is Apple’s first system to allow us to design in context, without depending on chance for the all-important visual aspects of the computer’s output.

Well said. And one of the few places Jef and Steve really saw eye-to-eye, in the long run.

Today’s must-have iOS application is HubbleSite, the online home of NASA’s Hubble space telescope. For over 20 years Hubble has orbited the Earth, beaming home images of celestial splendour; now you have access to the world’s most remarkable Hubble images at your fingertips, to enjoy on your iPhone anytime, anywhere.

Cast your eye over a vast collection of spectacular sights from the Hubble archives and vote for the images that you find the to be the most astounding. Download a selection of wallpapers for your device, all of which have been chosen and edited to deliver beautiful results on the iPhone & iPod touch with a Retina display. Read a compilation of amazing facts about the Hubble telescope’s history and the scientific discoveries it has revealed, from the age of the universe to the mysterious force known as ‘dark energy’ – all within the official Hubble iOS app.

For anyone interested in space and the universe around us, HubbleSite should be the next application you download from the App Store.

Pugnacious PC pundit John C. Dvorak is always fun to read. His opinions are often as outrageous as they are insightful. I’ve always been a huge fan, even when I disagree.

Dvorak’s latest post on PCMag.com, headlined “Understanding the iPad Computer,” is one of those I disagree with. In fact, I think his whole argument is exactly the opposite of reality.

(This isn’t the first time I’ve butted heads with PCMag.com over the iPad, by the way.)

In a nutshell, Dvorak attributes the overwhelming success of the Apple iPad not to the user interface, but to the design of the tablet as an output device, rather than input device. He writes:

“It was always assumed that the pad was going to be primarily an input device, like a paper and pen notepad. The successful machines of today are primarily output devices, not a notepad. It was this one simple paradigm shift that appears to be the difference maker.”

The column and conclusion are based on three key assertions, all of them false.

END_OF_DOCUMENT_TOKEN_TO_BE_REPLACED

A few hours before popular rumor indicated it would launch, Apple has just pumped Mac OS X 10.6.6 down through Software Update… most notably including support for the new Mac App Store, which is launching with over a thousand apps, including a very sexy new Twitter for Mac Client.

iWork ’11 is, surprisingly, not debuting on the Mac App Store, but you can find Aperture, at least, as well as iLife ’11. Check out the press release after the jump, and check in later for more of our impressions.

END_OF_DOCUMENT_TOKEN_TO_BE_REPLACED

LAS VEGAS, CES 2011 — Intel gave a detailed look at its next-generation Sandy Bridge chips that will likely make their way into Macs in 2011.

The chips boast four cores and integrated graphics processors that improve image-processing performance and power-management, according to Intel.

Made with a 32nm manufacturing process, the chips boast an incredible 1.16 billion transistors apiece.

Several PC companies here at CES unveiled new machines powered by Sandy Bridge chips, including Lenovo. Apple is usually several months behind and will likely introduce the new chips in the spring at the earliest.

During the preview event, Intel’s executives were extremely bullish about the Sandy Bridge line, portraying it as the biggest product launch in the company’s recent history.

The Sandy Bridge line comprises 29 chips that will find their way into more than 100 different “desktops, laptops and everything in between,” said Intel’s CEO Paul Otellini in opening remarks.

The most important addition to the chips’ architecture is the integrated graphics processor, which outperforms 45% of discrete graphics cards on the market today, said Eden. It certainly looked pretty impressive, displaying and streaming 1080p HD streaming wirelessly from a laptop to a connected TV; and conjuring up a 3D avatar of Eden that he said could easily be inserted into a game in realtime.

We start with software in today’s deal spotlight. No doubt, many readers received an iPhone as a present this year, so our first two bargains focus on the Apple handset. We take a look at the latest crop of price cuts from the App Store, including “Produce Tracker,” an app that keeps a history of your purchases. We also check out some free apps for the iPhone, including “Vectorama,” a vector arithmetic app. We finish up the spotlight with a number of Mac software titles that are part of a MacPromo bundle.

Along the way, we also check out some hardware deals for the MacBook Pro, as well as the Mac Pro. We also take a peek at some accessories for your iPhone or iPod.

As always, details on these items and much more can be found at CoM’s “Daily Deals” page right after the jump.

END_OF_DOCUMENT_TOKEN_TO_BE_REPLACED 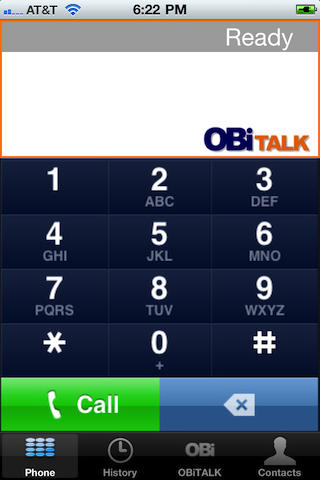 OBiON, a free mobile communications app for iPhone, iPad and iPod Touch now available for download from the iTunes App store, is an exciting — if still evolving — tool that offers more power and flexibility than any similar app available today.

The app is the mobile centerpiece in a new communication paradigm being charted by Obihai Technology, a Cupertino, CA start-up founded by the developers of the first Analog Telephone Adapter, which made “Internet calling” possible without the use of a computer and spawned the growth of Vonage and dozens of other Internet Telephony Service Providers.

Now, in conjunction with the OBiTALK web portal and the company’s Obi110 Voice Services Bridge, OBiON users can leverage the ability to make and receive calls from local or remote landlines, as well as to and from multiple VoIP services on Apple mobile devices.

END_OF_DOCUMENT_TOKEN_TO_BE_REPLACED

I’ve read a lot of Steve Jobs interviews but until now I’d not seen this 1985 interview from Playboy.

It catches Steve Jobs at age 29, one year after the Macintosh was launched. He is by far the youngest person on Forbes’s list of richest Americans and one of only seven who made their fortunes on their own.

He’s portrayed by Playboy as the Mark Zuckerberg of his era: a Valley wunderkind with a magical gift for foreseeing the future. Of course, it’s interesting to look back and see how the future actually panned out.

Jobs comes across as a confident and knowledgeable, but not brash and arrogant. Here’s a few of the highlights: