While much has been made over Apple’s uncharacteristic pre-conference spilling of the beans regarding the impending announcement of a new, web-based service called iCloud, no one really knows what this “amazing,” “fantastic” and “magical” new service is going to look, feel or sound like — and won’t — until Steve Jobs unveils it to the audience at San Francisco’s Moscone West auditorium next week.

Still, we can put together a reasonable idea of the service iCloud will provide based upon Lala, the streaming music service Apple bought back in 2009. Assuming that Apple is basing iCloud on Lala and filling in the blanks with the latest industry reports and rumors, here’s a complete overview of what we think iCloud will look like when it’s announced on Monday.

END_OF_DOCUMENT_TOKEN_TO_BE_REPLACED

If you’re goin’ to San Francisco for WWDC be sure to join us next Thursday, June 9 for the Cult of Mac Meet and Greet at Potrero Hill’s notorious Il Pirata.

We’ll have some goodies to give away. Here are the details:

END_OF_DOCUMENT_TOKEN_TO_BE_REPLACED 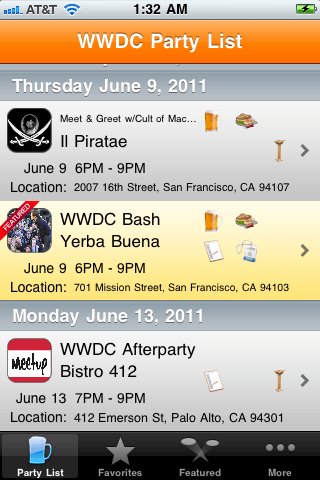 END_OF_DOCUMENT_TOKEN_TO_BE_REPLACED

San Francisco-based Cult of Mac staff and any others of our far-flug correspondent crew as can get here look forward to meeting readers and WWDC attendees at a cocktail reception on Thursday, June 9 from 6pm – 9pm during Apple’s World Wide Developers Conference.

END_OF_DOCUMENT_TOKEN_TO_BE_REPLACED

Karelia Software announced a major upgrade to the company’s flagship Sandvox product Tuesday, making it possible even for CEOs to quickly and easily build a website.

Far simpler than Dreamweaver yet more flexible and robust than iWeb, Sandvox 2.0 is designed for Mac and brings fully competent web design within the realm of possibility for those with nothing more than a desire for presence on the Internet and a vague idea of what it should look like.

Its palette of stock site designs aren’t especially cutting-edge but what Sandvox does offer is clean and uncluttered, with a range of inoffensive color themes that should appeal to the wide audience of individuals and small business owners who may be flummoxed by an infinite variety of web-publishing platforms — and don’t want to pay an actual web designer to build an attractive, functional website.

END_OF_DOCUMENT_TOKEN_TO_BE_REPLACED

Perhaps you caught our recent review for the killer iOS photo app, FX Photo Studio. If you didn’t rush out and buy it right away based on the stunning (cough, cough) examples in the accompanying gallery, or – heaven forfend – on the basis of its five stars, then here’s your chance to get it on your device for FREE.

Just go to Cult of Mac’s Facebook page and like us before midnight Friday PST (that’s about 36 hours from the time of this post) and you’ll be entered into a drawing for one of six free download codes for FX Photo Studio for iPhone and iPad.

That’s it. If you already like us on Facebook (yay!) you’re already entered, so don’t feel the need to “unlike” and then “Like” again to get in on this awesome opportunity.

Winners will be notified of their bounty and good fortune during the day on Friday.

Among modern addictions, the one to iOS photo apps appears to be gaining purchase in the global culture. Facebook, Flickr and all manner of photo sharing services across the Internet are rife with the evidence, as is the success of web-based standalone services such as Instagram and Hipstamatic.

So, if you’re inclined to think of your iPhone or iPad as a palette for creativity, consider FX Photo Studio for the full-on rush its beautifully executed UI and finely detailed features bring to your artistic toolbox.

This 99¢ app ($2.99 for the iPad version) from the developers at MacPhun packs nearly 200 different effects and filters into a robust processing engine that will amaze you with its ability to enhance your photographs in ways limited only by your own imagination.

END_OF_DOCUMENT_TOKEN_TO_BE_REPLACED

In case there’s any doubt about whether the iPad has ushered in a post-PC era in mobile computing, Zen Viewer is one app to consider on your path to enlightenment.

Made by the Skins Factory, Zen Viewer is a feast for the eyes, drawing on iPad’s generous screen real estate and graphics capabilities to make document management on Apple’s flagship iOS device a nearly sublime experience.

Choose from a half dozen customizable themes to suit your prevailing technical chakras and let Zen Viewer organize and balance the files on your device with its fully searchable file system, document reader, image viewer, audio and video playback device and audio recorder.

The app is fast and responsive, a wonderful showcase for the iOS touch navigation platform, with its colors and graphic elements lending a rich gravitas to the otherwise mundane realm of file management. Audio and video playback are flawless and the recording feature should be a boon to anyone still having trouble with the touch keyboard.

Some bugs and glitchy performance with WiFi transfer look like they need some polishing, which Skins Factory support says is being addressed, but for $2.99 and such an early version release (1.6.6 is the latest, updated 3/29), Zen Viewer has great potential.

Skobbler, makers of Forever Map, a cool 99¢ navigation app for iOS devices is giving away an iPad2 on Monday so you have a small window of time to squeek through and snag your chance.

All you have to do is “Like” Skobbler’s Facebook page and “Like” one of its daily status updates between March 29 and April 4 to be entered in their drawing.

The rules are unclear whether that means you have to “Like” a daily status update for each day between 3/29-4/4 or if it’s OK to “Like” just a single status update during that timeframe, but it couldn’t hurt to get happy with the “Like” buttons. The folks at Facebook seem to enjoy and how else are you going to get an iPad2 these days?

Thanks to everyone for participating in the Geo Walk iPad2 giveaway contest this week. As determined by random drawing the winners are:

Look for more Cult of Mac giveaways here on the site, and be sure to keep up with all the latest news and info by following @cultofmac on Twitter and by Liking us on Facebook.