It already seems like years ago that Apple unveiled its smartwatch. In this #TBT gallery, we relive the glory of last week's big event, as captured by award-winning sports photographer (and iPhoneography aficionado) Brad Mangin.

A security guard keeps a close on the crowd at Apple's iPhone 6 event.

Everybody wants inside the giant white building Apple constructed outside the Flint Center. These guys make sure nobody gets in early.

The Apple Watch boasts several innovative features, including a "digital crown" designed to ease interactions with the smartwatch's tiny screen.

Tim Cook shows off the Apple Watch, which will be available in three styles. A wide variety of straps, colors and faces make the smartwatch extremely customizable.

U2, a band boasting a long history of collaboration with Apple, performs to wrap up the show.

After the event, members of the media get a closer look at the Apple Watch.

I finally get my hands on an iPhone 6 Plus.

As the hands-on demo sessions wrap up, a few people linger inside Apple's mystery building. 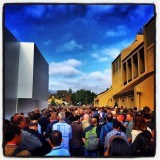 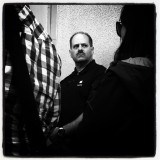 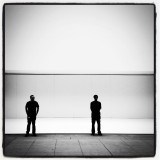 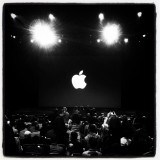 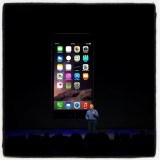 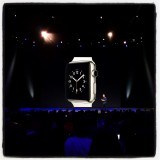 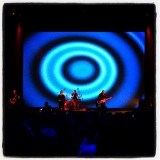 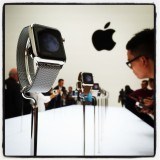 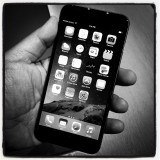 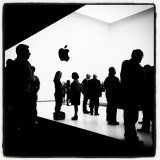 CUPERTINO, California — I’m a sports photographer, not a tech blogger, so I felt out of place shooting Apple’s big iPhone 6 press event with my iPhone 5s.

Baseball is what I do — I’ve shot nine Sports Illustrated covers — but I swear it was easier getting field access to shoot a World Series game at Fenway Park than dealing with all the people and security at Apple’s event.

This thing was a free-for-all. It was crazy. The place was flooded with media types from all over the world, all standing in line to get into the Flint Center for the Performing Arts, where the event was held.