At Computex 2011 in Taiwan this week, Asus unveiled its Padfone – a new smartphone that can be placed into the back of a magic dock transforming it into a tablet. But before you stick your iPhone 4 on eBay and start waiting for one of these things, check out this dock from ECS which does exactly the same thing with your iPhone.

It’s currently just a prototype, but it allows you to turn your smartphone into a tablet – simply by sliding it into the back of the device. It works with a variety of Android and Windows 7 smartphones in addition to those powered by iOS, but was demonstrated at Computex using an iPhone 4.

It works by taking your iPhone’s video output via a HDMI connection and relaying to the 9.7-inch display at the front. It also boasts an SD card slot, two USB ports and a front-facing camera.

It’s currently unclear how the iPhone picks up your interactions through the iPad-like display at the front while the device is hidden away inside the dock, however, ECS promises it works and that it will also be compatible with the iPhone 5 when that launches using some “simple upgrades.” 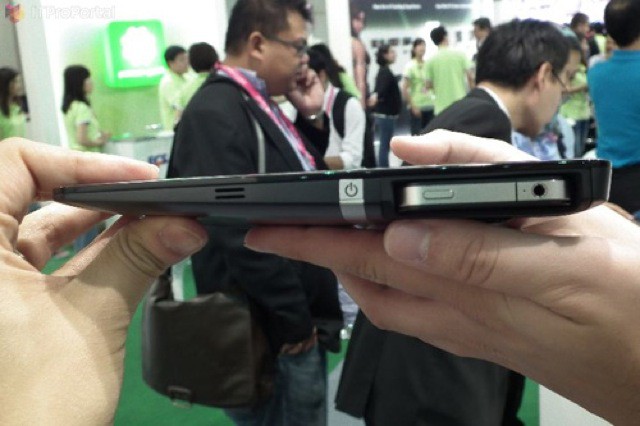 The device has been created by ECS and its partner ICE Computer, and is yet to be given a name, but will hit the market during the fourth quarter at around $200.

Essentially this is just an expensive way of magnifying your iPhone’s display, and I’m not sure I’m too keen on the idea. What do you think? Would you buy one?