A native Google Maps application comes built-in to our iOS devices, and while it’s great for accessing maps and getting directions while we’re on the go, it is lacking a few important features. Thankfully, however, Google has just launched an updated Google Maps web app which offers a little extra.

The new Google Maps web app is currently available to those with Android and iOS powered devices – including the iPad – and can be accessed by visiting maps.Google.com in your mobile web browser.

Its new features allow you to:

• See your current location
• Search for what’s nearby with suggest and auto complete
• Have clickable icons of popular businesses and transit stations
• Get driving, transit, biking, and walking directions
• Turn on satellite, transit, traffic, biking, and other layers
• View Place pages with photos, ratings, hours, and more
• When signed into your Google account, access your starred locations and My Maps 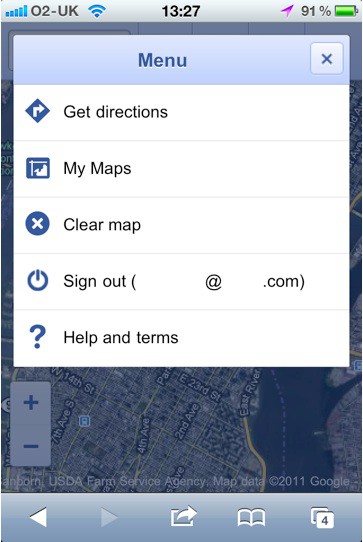 While the maps don’t cache and may not load as quickly as they would if you accessed them from the native Google Maps application, the web app offers some advantages, such as singing into your Google account to access starred locations and ‘My Maps’.

The web app can also be updated by Google whenever necessary and means you don’t have to wait for an iOS update to get new features or bug fixes.