We’ve written previously about the odd dichotomy emerging from the general disdain with which the iPhone’s camera is regarded — fixed focal length, only 2 megapixels, blah, blah, blah — and the ever-increasing number of applications appearing to give iPhone photographers unprecedented control and creativity over their images.

Tonight we call your attention to a wonderfully whimsical app called ColorSplash, for two reasons.

First, it’s an amazingly powerful tool that, for $2, gives anyone the ability to transform their snapshots into arresting images in a way that Madison Avenue has long paid professional photographers and creative directors big bucks to do. 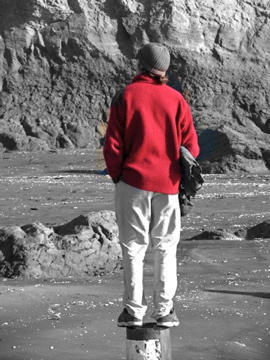 Using your finger on the iPhone’s touch interface you can highlight just enough color on a black and white image to make it pop, turning something ordinary and mundane into something extraordinary and memorable.

Which calls for the second point, which is that, when this kind of thing can be done so well and so easily and so cheaply on Apple’s mobile UI, just imagine the creative possibilities to come when touch interface technology becomes the norm for high-end mega CPU computing platforms.

What I was able to accomplish here tonight, literally in a few minutes dragging my fingers across a little 3″ screen, would have been far more complicated — if not more time consuming — to accomplish using masks and layers and industry standard digital retouching tools in common use today.

The current economic situation may appear to be dire in many respects, but the future of creative expression, as evidenced by the explosion of tools and ideas inspired by the iPhone, seems bright indeed.