The iPhone is a phenomenal tool for a bit of tromping about in the bush; navigation, stargazing, photographing/filming and even staying alive can all be accomplished with the help of the little gadget. That is, if it’s got any juice left.

Solio’s Rocsta ($80) — a solar panel mated to a thin slab of a battery in a sleek, flat, user-friendly housing — seems to have been created with a nod to minimalist adventurous types who want a rugged, no-fuss solar charger aong on their next Iditarod or photo shoot for National Geographic.

Probably the biggest advantage to the Rocsta over other solar chargers is immediately visible: the clever design of its Lexan housing. It’s a flat, thinnish, light (130g) plank with a carabiner clip at one end and a securing slot at the other, making the Rocsta incredibly easy to position toward the sun —  which is key when soaking up sun to charge the battery. Clip it to a pack lid, attach it to a bike rack or tie it to your arm — the shape, size and attachment options make it extremely flexible. 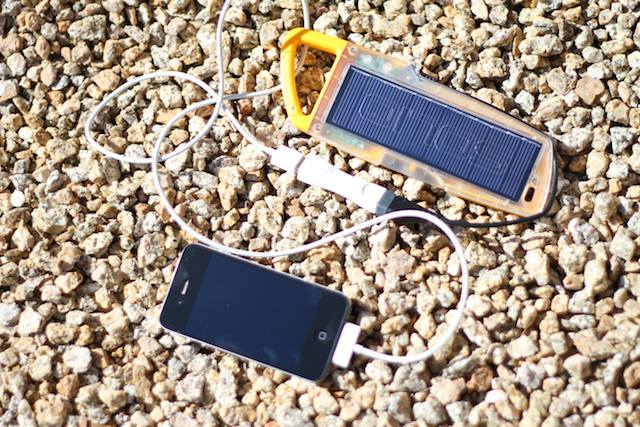 Charging its 1000 mAh battery to full capacity from empty took about eight hours under a clear desert sky with optimal placement of the panel. A button on the back starts and ends the charging process, and a green LED displays capacity in five levels. The Rocsta can also be used as a backup battery sans-sun by charging it directly with the supplied charger.

Some reviews seem to indicate that the Rocsta’s charging performance is over-sensitive to its angle toward the sun. Our testing showed that wasn’t the case, and that it could handle a fairly decent deviation from being pointed at a 90-degree angle toward the sun. Luckily, a red LED lights up to confirm the battery is dining on sun-juice.

The Rocsta seemed pretty rugged and water-resistant, and even pretty major splashes didn’t faze the unit; you probably wouldn’t want to submerge it though. Conveniently, it’ll let you charge your iPhone while it’s juicing up.

There’s a tradeoff to the unit’s svelteness though: the battery is on the skimpy side, and I only ever managed to eke out about a half-full iphone 4 charge from the Rocsta before its battery emptied. That means iPhone use must by necessity be pretty judicious or survival-mode only, especially in less-than-sunny locales.

It also comes with just about every connector ever devised; a micro-USB adapter, a mini-USB adapter and a bucketload of manufacturer-specific phone adapters are all included. It even comes with a triple-LED flashlight head.

One final note: None of my repeated attempts to contact Solio directly with questions about the Rocsta resulted in a response; I even tried a bit of Cult of Mac name dropping, which usually results in an almost immediate response. Still not a peep from Solio.  We haven’t altered the rating of the Rocsta to reflect our experience with Solio’s (lack of) customer service, but we thought our readers might like to know. 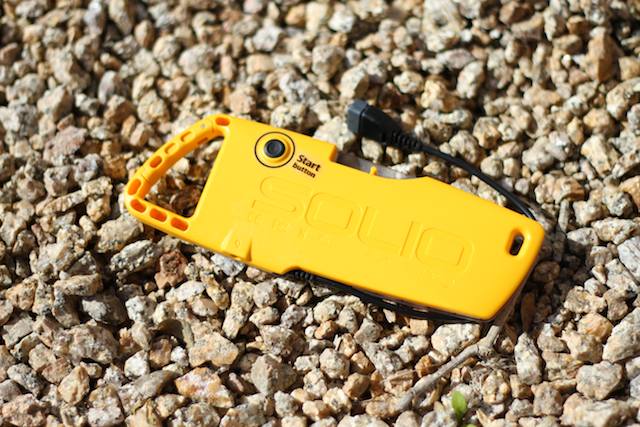 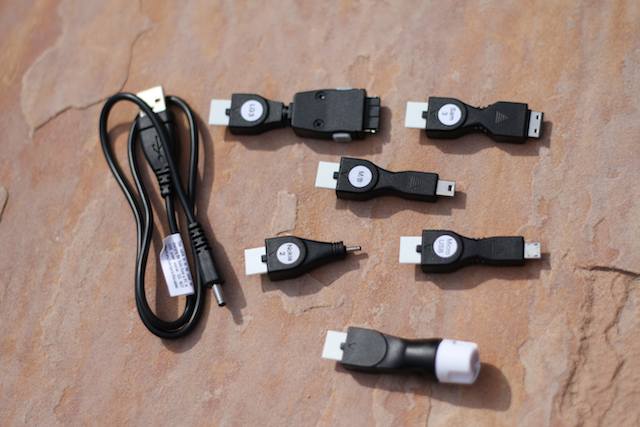