One of the best things about a device like the iPhone is that you can enjoy constant connectivity with your favorite social networks – wherever you are, whatever you’re doing. As one of the most popular social networks, it’s no wonder there’s a shed-load of third-party Twitter clients in the App Store, but how do you separate the good from the poor and decide which is best for you? 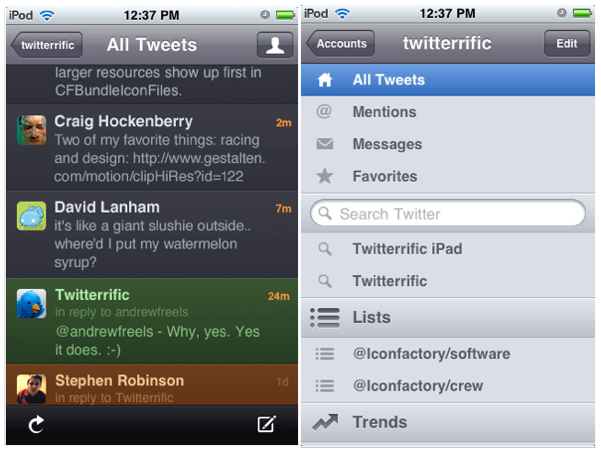 The award-winning Twitterrific is a personal favorite of mine. It looks good, it’s easy to use, and it’s full of elegant features. It boasts a unified display that shows all of your replies, retweets, direct messages, mentions and more in a single timeline. Create Twitter-based searches and lists; browse conversations threads between users; follow, un-follow and block users from within the app; and filter your timeline for specific tweet types and trends. The only downside to Twitterrific, which may be a decider for some users, is that your messages timeline isn’t broken up into individual conversations like other apps – it’s simply a list of all of your messages. 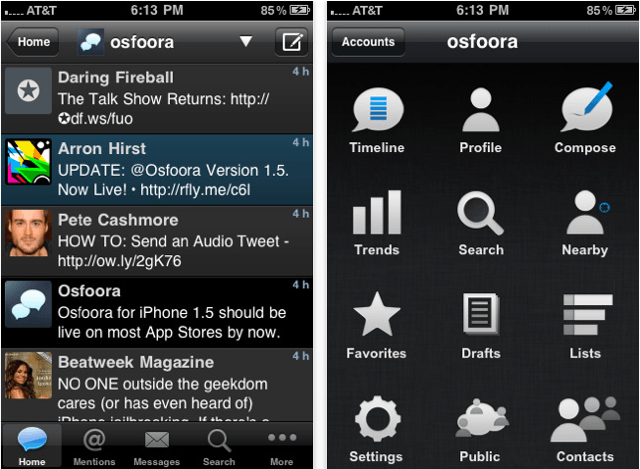 Osfoora is another great client that presents a nice, clean UI; a home screen with individual buttons to access most functionalities with a single tap; multiple account support; and a long list of great features. It includes support for TextExpander and Twitlonger, allows you to tweet the songs you’re listening to, customize your profile from within the app, and subscribe/unsubscribe to lists. Its nearby search feature lets you quickly see other tweeters around your location, and you can translate tweets to/from another language. 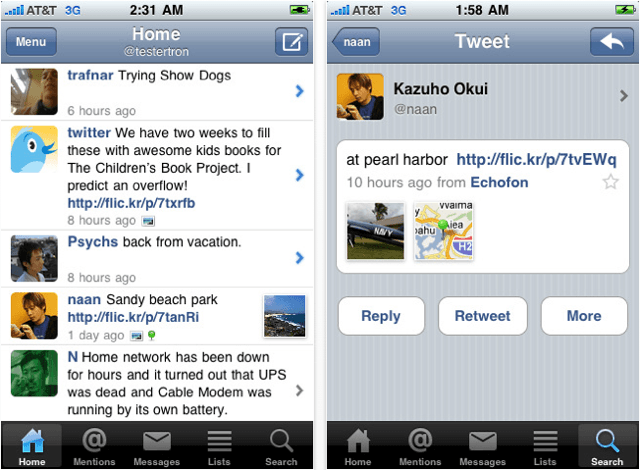 Echofon is very similar to the official Twitter app, but it seems to be a lot nicer – especially on the iPad, where its an ideal choice for users who don’t like the official Twitter app’s sliding window feature. Its mute feature makes it easy to ignore certain users, clients, and hashtags; while the brilliant ‘streaming’ feature for the iPad continually updates your timeline when you’re connected over Wi-Fi, so there’s no need to refresh. 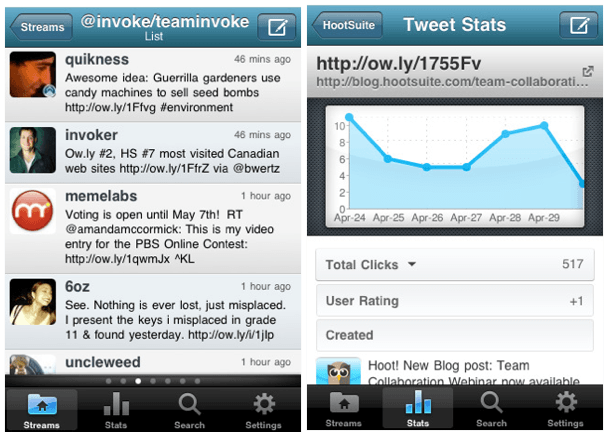 HootSuite is an ideal choice for users who also use Facebook and Foursquare, as it features support for all three social networks – allowing you to manage your Twitter account, checkin to Foursquare locations, check and comment on your Facebook news feed, and more – all from one app. Translate messages to/from over 50 languages, schedule updates for future sending, and ‘Bump‘ to quickly add future followers. Another great feature in HootSuite is its tracking options; examine message click statistics by date, see which countries are clicking on your links, shorten URLs with Ow.ly for stats, and track user ratings for links. 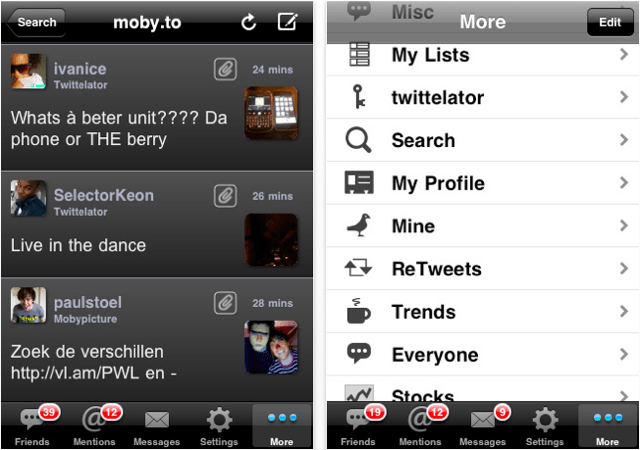 Twittelator claims to be “the ultimate Twitter client with every feature you need.” It certainly does have a long list of features, and its well designed UI makes it one of the best third-party clients in the App Store. This app also allows you to post to Facebook; create, edit and tweet videos; find nearby tweets; perform advanced searches; and set your timeline to auto-refresh. What’s unique about Twittelator is that when you’re bored of its look, you can create your own theme or use one of the 4,500 themes available. 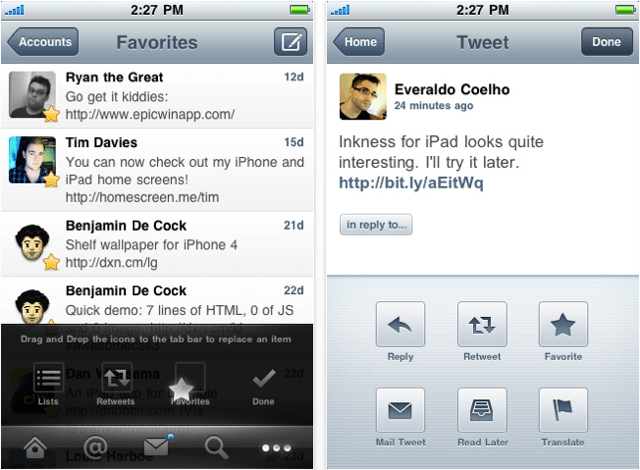 If you don’t want anything fancy, Weet is the perfectly simplistic solution to your Twitter needs. It provides all the functions the average tweeter will ever need, including retweets, lists, searching, direct messages, trending topics and favorites – without all those advanced features that might get in your way. It features support for TextExpander, CloudApp, TwitPic, TwitVid, twtmore, Instapaper, Read It Later and more. 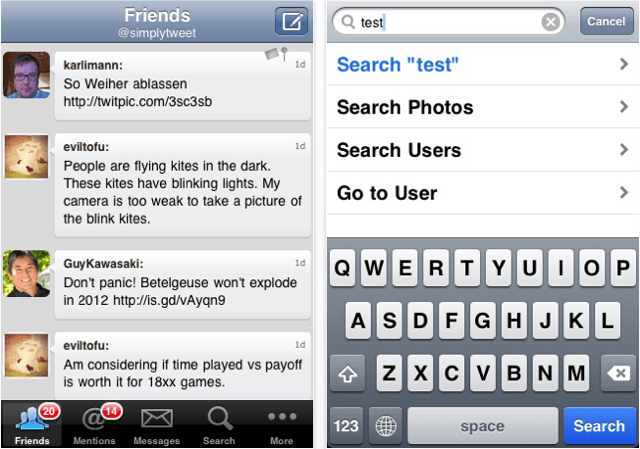 SimplyTweet 3 gets great ratings in the App Store thanks to its plethora of features guaranteed to please even the most advanced Twitter users. Push notifications will ensure you’re always informed of mentions and direct messages, there are 5 different themes to suite your mood, chained conversations, swipe-to-reveal shortcuts, unread tweet indicators for each tab, contact lists, and so much more. 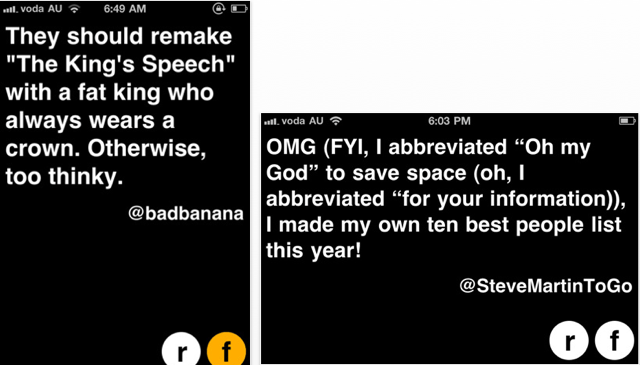 Trickle is an app unlike all of the others we’ve mentioned – describing itself as a “passive Twitter client,” it’s great for users who would rather sit back and take in what’s happening on their timeline without much input. It’s minimal interface displays tweets in a big, bold font – allowing you to sit your iPhone in its dock on your desk, open Trickle and carry on with your work while your timeline is displayed subtly in the background. It aims for ‘hands-free’ functionality meaning you can retweet and favorite tweets at the tap of a button. Trickle is also available for Facebook.