Things got a little heated in a London marketing firm when an Apple laptop (a PowerBook G4?*) started smoking, then burst  into flames.
“When I got there, much of the smoke has dissipated and nothing much was happening. I picked up the notebook to investigate, and turned it over. Soon after I put it down again, it basically exploded. Flames were flying six feet high in the air, and sparks,” an unnamed IT manager told the Inquirer. 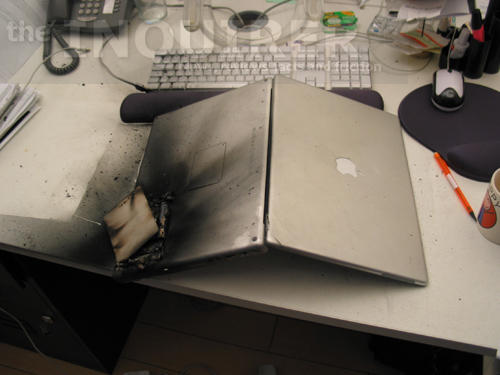 The fire is thought to have started in the battery,  the IT manager said the computer was three-to-four years old.

“We are aware that there was a battery recall several years ago, it is entirely possible that the battery was one of those subject to that recall, but we can’t tell now as the battery is now just slag.”

The pics — melted keyboard, smoke, battery fused like a modern art sculpture  — are worth a gander.

(*The story first identified the flaming computer as a MacBook, then Powerbook).