The single and family license packs of MobileMe have gone AWOL in Apple online and retail stores and according to AppleInsider resellers have been advised that these products have been declared end-of-life by Apple.

The abrupt departure by these apps from retail channels indicates that something is going to happen and some of it might happen tonight during a scheduled outage that will last about a half-hour later tonight. 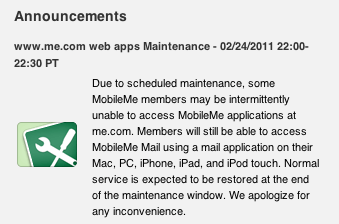 It isn’t clear about the direction Apple plans to take with MobileMe, but there are plenty of rumors floating around about what might happen. I’m sure we’ll find out more on March 2nd next week.

In the meantime I’m wondering about what will happen to that extra year of MobileMe service that I’ve already paid for?