It may also get QuickLook from OS X — the ability to quickly peek at a file or email attachment without launching any programs.

The new capabilities were discovered by programmer Chris Galzerano, who has been digging around in the iOS 4.3 SDK and firmware beta.

Here are the details:

UPDATE: Mark Gurman from 9to5Mac is skeptical about this information. PhotoBooth is right, he says, but has been known for weeks. QuickLook is for opening attachments in email; the Sports Trainer frameworks have been in iOS forever, and likely refer to Nike+; and the Wireless Syncing frameworks are likely part of regular MobileMe syncing.

Inside the iOS 4.3 beta firmware, Galzerano found new frameworks for:

Wireless syncing is the ability to sync an iOS device with its host computer wirelessly, a feature long requested by customers. Back in June, Steve Jobs said WiFi syncing was coming “someday.” Looks like someday might be someday soon. The iOS 4.3 update is expected to be released within weeks.

The iOS beta also contains references to other new capabilities. Here are the details:

After looking in the accessibility and privateframeworks folder in the system folder, I noticed some things. There is a 100% chance of Photobooth on iOS. There is a private framework for photobooth effects and there is an accessibility bundle. There will also be a sports training app for workouts. There are 3 private frameworks relating to it and an accessibility bundle. iOS 4.3 may also have QuickLook, which is a feature in Mac OS X. There is also a framework for wireless syncing. In the image for the wireless sync, it shows the regular syncing (MobileSync.frmaework). Then, it shows the wireless sync (MobileWirelessSync.framework) Screenshots with annotations below: 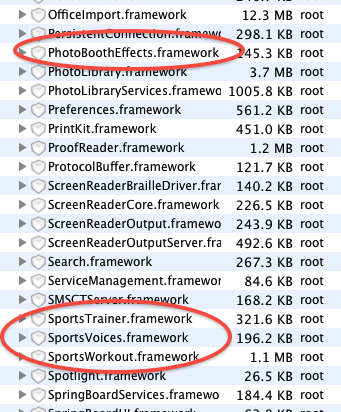