The early Verizon iPhone reviews are in, and it’s basically the same story across reviewers: calls are better, but data downloads not so.

The VZW iPhone is a great phone, Wired.com reports, but data isn’t as speedy as AT&T’s.

WIRED It’s a better phone, period. More likely to pull a signal, even indoors — this could change the way we converse at bars. Hot-spotting is well-integrated and very easy to use. Has a whiter, slightly better-looking display.

TIRED Slow data transfers compared to the AT&T iPhone. Sluggish app installs take away from the App Store’s instant gratification. Video streams are compressed more heavily, so Netflix and YouTube are uglier. No simultaneous voice and data transmissions thanks to the limitations of CDMA.

Meanwhile, David Pogue at the NYT says: “…the Verizon iPhone is nearly the same as AT&T’s iPhone 4 — but it doesn’t drop calls.”

And Pogue brings up a good point about the VZW network buckling under the rush on new iPhones:

Consider, too, that if surveys are any indication, Verizon can expect an enormous stampede of new iPhone customers. Last time this happened — to AT&T — the weight of all those bandwidth-sucking iPhones swamped the network, causing interruptions that persist to this day. The same thing might happen to Verizon.

Verizon swears that it’s prepared for the onslaught. Then again, that’s what AT&T said, too.

The Verizon iPhone goes on pre-sale at 3am tomorrow. First deliveries are expected on Feb. 10.

Engadget did some speed tests and found AT&T’s network was significantly faster. Here’s the results: 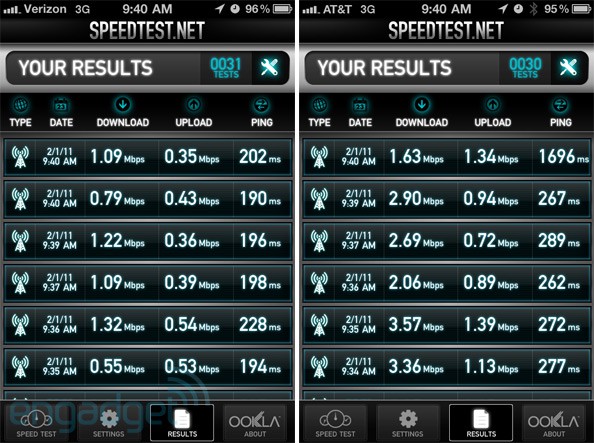