Ben David Walker, a student from the U.K., has designed a new banner notification system for the iPhone that cleverly uses some empty space in the current iOS.

As we reported yesterday, Apple is revamping the much-criticized pop-up notification system in iOS and is buying a third-party app developer for its technology.

The current notification system is a mess. It was designed in 2007 when users had the odd SMS message or alarm, but is useless for 2011 when users have multiple messages coming in from Twitter, Facebook, SMS, as well as alarms, reminders, voicemails and missed calls. There is nowhere in iOS to see them all in one location.

But there would be using Walker’s new system. Here’s how it would work. 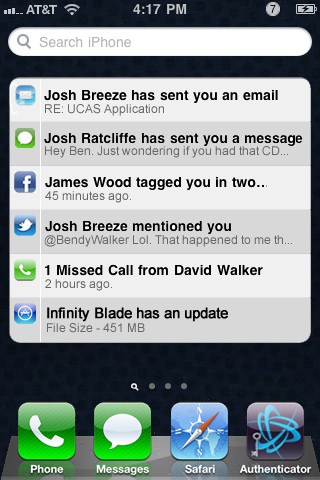 Walker’s notification system uses the empty space on the Spotlight search screen, which is revealed when users swipe right on the Home screen.

Currently, the Spotlight search screen is pretty much empty. Except for the search box at the top, the screen contains a big black space where the search results are presented.

Walker proposes using that space to display banner notifications about incoming email, and messages from Twitter, Facebook and IM. It will also include push notifications from various apps. When the user taps on a notification, they are taken to the appropriate app.

I chose to put it in Spotlight because if it was located on a separate homescreen, then it would mean two swipes to get to either your notifications or Spotlight Search. As it stands in iOS 4.2, Spotlight is massive waste of space (literally speaking). The search bar takes up a tiny portion of the screen and there is plenty of unused space underneath. As you can see in the diagram, simply tapping the Spotlight Search bar will bring up the keyboard and allow you to perform a search instantly. The only difference is that notifications are displayed if you don’t tap on the search bar.

When users initiate a Spotlight search, the notification banners are replaced by search results. 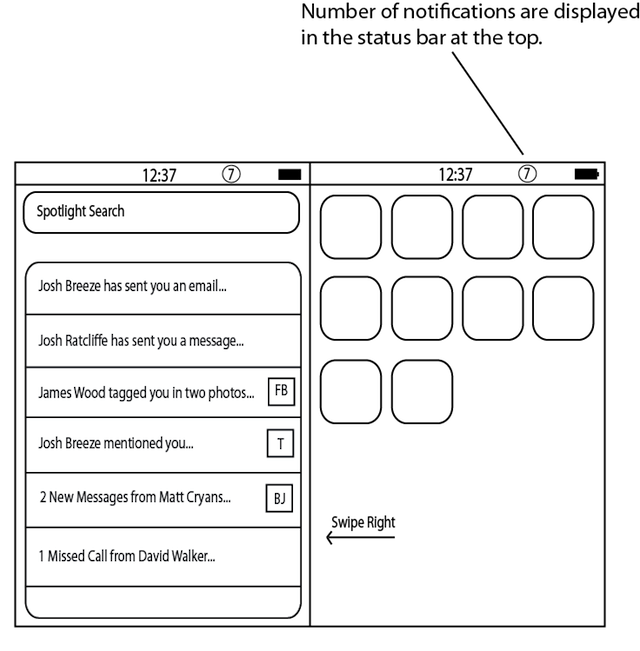 Walker tried to avoid copying Android, which has a menu that is dragged down from the status bar, and HP’s webOS, which has a slide-up pane.

He also tried to figure out a system that confined notifications to a well-defined area of the OS, and not have them cluttering up other screens. He considered using the area above the multitasking bar, which is revealed when users double-tap the Home button. But Walker thinks adding notifications there would be cluttered and confusing.

He also wouldn’t change the current notification system that is displayed on the lock screen. That system is fine, he says, when the phone is locked, but would clutter up the homescreen when the iPhone is unlocked. That’s why it makes sense to have a separate screen to display multiple notifications — the Spotlight Search screen.

What do you guys think? Is it a good idea? Is there a better way?