Save more than half off a new iPad mini 3 [Deals]
Add rad text captions to your Instagram photos without an app
Take a deeply discounted dive into iOS development [Deals]
Apple Arcade’s Butter Royale is a Fortnite-like food fight
These gorgeous cases wrap your AirPods Pro in luxury leather
Palm-size pillows will have you dreaming about that first Mac
Broadcom lands $15 billion deal with Apple to sell it iPhone components
Why everyone’s upset about AirPods Pro, and Tim Cook’s favorite shower tech, this week on The CultCast
Today in Apple history: Apple ships the first Mac
Profile focuses on Apple’s cutthroat buying practices and ‘The Blevinator’

Except that in the Viagra-fueled Italian government that’s pretty much business as usual. Simeone Di Cagno Abbrescia, 67, is a member of Italian premier Silvio Berlusconi’s PDL party, who perhaps thought checking out what to do after work on the iPad’s glossy 9.7-inch screen was no big deal.

The tablet computer – if he’d had a laptop he could’ve adjusted the screen down – was probably what got him busted by a fellow politician with a phone cam. 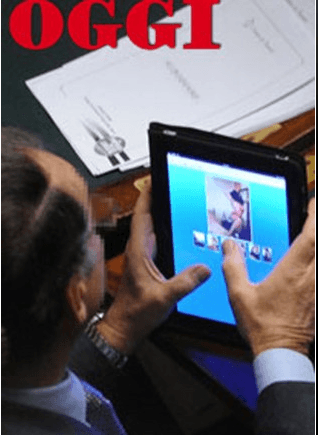 The escort iPad pics hit newsstands today in one of the boot country’s leading weeklies, Oggi. Probably the most lurid part of the whole affair: despite being owned by RCS – so it is one of the few media properties that Silvio Berlusconi does not own – it didn’t have the coglioni to name names at first.

Di Cagno Abbrescia outed himself after the pics hit the web, telling daily La Repubblica that the pics were pop-up ads that “came up suddenly” while he was navigating a news site.

While he accidentally perused the prostitute pics, parliament was in session for a vote of confidence for Culture Minister Sandro Bondi, a fellow party member, who was under fire after the collapse of a Roman gymnasium for gladiators in the ancient city of Pompeii.