Cupertino’s second-generation AirPods Pro, which went on sale Friday in stores, look almost exactly like the original model released in 2019. But they’re upgraded in every way that matters most, thanks mainly to the new H2 processor.

Apple may not have gone as far as it could have in some ways, but the new AirPods Pro are among the best earbuds on the market and a worthy upgrade for almost anyone. They’re particularly great for those who use lots of Apple gear and love how seamlessly their devices can work together.

Let’s take a look at, and a listen to, the second-gen AirPods Pro, aka AirPods Pro 2.

I’d love to be able to listen carefully to exactly how much better my new AirPods Pro 2 sound than AirPods Pro, but these are actually my first Apple earbuds.

I’ve reviewed plenty of other wireless ANC earbuds, however — from outstanding examples to decent budget options — so those will be some of my comparison points.

Unboxing AirPods Pro 2 is a typical experience with Apple’s aesthetic. Everything about the packaging is clean and white and perfectly placed, and when you lift the lid and see “Designed by Apple in California,” you think, oh, these are going to be nice.

And they are nice — beautiful, actually.

Apple products tend to instill a sense of magic right out of the box. The spare presentation includes a rock-solid but sleek and fairly lightweight white wireless charging case for MagSafe and Qi wireless top-ups. White’s still your only color choice with Apple buds (for colors, see subsidiary Beats buds).

But unlike the original AirPods Pro buds’ case, the new case includes a speaker that issues a tone in concert with a U1 chip, a la AirTag, and the Find My system. The case also features a lanyard loop (lanyard sold separately) and an option to personalize.

In my rush to get my order in, I didn’t personalize the case with emoji, initials or numbers. I kind of wish I had, though. What was I thinking, that I might sell these buds on eBay so I better keep the case plain? No, I won’t be selling my AirPods Pro 2.

Also in the box you get an unusually long USB cable, compared to many earbuds. It’s a USB-C to Lightning cable for wired charging — possibly the last Lighting cable that will come with Apple earbuds.

At a full meter in length, it’s two to three times as long as many USB cables that accompany earbud charging cases. The extra length is great, say, when your charger is in a power strip on the floor but you want to set your AirPods Pro case on the table above.

Apple also added a fourth ear tip in the box to help more people find a perfect fit. The new one is extra-small. That’s in addition to small, medium (pre-installed on the buds) and large. Four sets of ear tips is good, though I’ve tested earbuds that come with as many as seven sets. 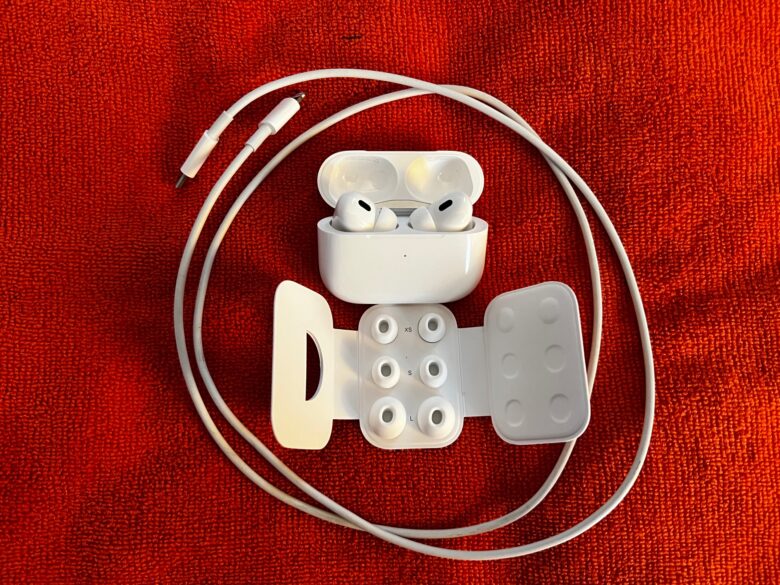 Which ear tips fit best? With most earbuds, the medium-sized ear tips often come already on the buds and usually work for me, or the large. But with AirPods Pro 2, rather than just seeing what feels right, you can take a test.

In the initial setup, easily guided by prompts, you can take the Ear Tip Fit Test (in Settings under Bluetooth > AirPods Pro > Ear Tip Fit Test). Apple explains that a good seal in the ear canal improves overall audio quality as well as noise cancellation.

It’s a simple test that takes only a moment (or many moments if you end up doing it again and again like I did). Just put in the earbuds so they feel secure. Then press the button on the screen and some music will play as fit is assessed. Then under an image of left and right earbuds it will say either “Good Seal” or “Adjust or Try a Different Ear Tip.”

Long story short, after many tests, the medium tips are best for me, but the test remains unhappy with my left ear.

When you fail the Ear Tip Fit Test

And it’s not just the test that seems a little annoyed. When I took my AirPods Pro 2 for a long walk on trails down by the river, the left one felt loose more often, as if it might fall out. So I kept having to fiddle with both, but especially the left one.

So I’m not thrilled with the fit, which, as I often say, is just about as important as sound quality. Because if earbuds aren’t comfortable or if they might fall out, you probably won’t wear them. The imperfect fit isn’t likely to stop me from wearing these buds, even though I prefer stemless designs.

However, I wouldn’t wear them to the gym as I would other earbuds (like these and these and these). At the gym, I once lost an Edifier NeoBuds Pro earbud, similar in design to AirPods Pro. Not a good feeling.

Another new wrinkle with the new buds is a skin-sensor borrowed from AirPods 3. It senses when you take a bud out and immediately pauses sound. And it knows the difference between skin and fabric, so it won’t resume play in your pocket. It works well.

And AirPods Pro 2 also added a touch sensor for volume control. In addition to a touch area for pausing playback and other actions, each stem has a slight indenture along its length where a force sensor lets you drag an index finger up or down to increase or decrease volume.

It took me a moment to get it going. Once my finger connected adequately with the sensor, I heard the little click that indicates volume is being adjusted. Then moving the fingertip up or down did its thing. Although I’ll probably adjust volume mainly with the paired device, manual volume control could be convenient.

One of the greatest things about AirPods happens as soon as you eagerly snatch them out of the box. Once the case is open, they pair instantly and seamlessly with other Apple gear.

“David’s AirPods Pro” showed up all over the place — MacBook Pro, iPhone 13 Pro and iPad Air — without me having to do a thing. You just tap the animation on whichever screen and you’re in business.

You can also intentionally pair them, of course. As with many earbuds, the case has a button to initialize pairing via Bluetooth 5.3 — upgraded from 5.0 on AirPods Pro — to other devices.

The buds lack support for Bluetooth Multipoint for simultaneous use of different devices, but Apple’s automatic switching knows when you’re trying to use a different Apple device, like moving from your MacBook to your iPad or iPhone. I found that worked pretty well, though I’ve been momentarily unsure at times which device was in charge.

Apple’s upgrade to Bluetooth 5.3 makes a pretty good segue to sound quality. It’s great that Apple went with the latest Bluetooth, but it isn’t yet using Bluetooth 5.3 to its full potential. The company hasn’t said anything about incorporating Bluetooth LE Audio, including the new, super-efficient Low Complexity Communication Codec, or LC3.

Doing so could result in even better audio than you already get with AirPods Pro 2. But we may not see Apple take that step until next-gen AirPods Max arrives. And perhaps Cupertino will apply it retroactively to AirPods Pro 2.

As for AirPods Pro 2 sound quality, it’s undeniably high. Though it’s sticking with the SBC and higher-res AAC audio codecs in the 2nd-gen buds, Apple gave them new, low-distortion drivers and new high dynamic-range amplifiers for what it called “richer sound with more clarity and consistency across volumes and a wider range of frequencies.”

I can’t quibble with that. For pure sound quality, they’re as good or better than any earbuds I’ve tried. And personalized spatial audio with head tracking just makes them more interesting, offering a sort of 3D sense of being in the room with musicians.

AirPods Pro 2 compared to other earbuds

I compared AirPods Pro 2 directly to Edifier NeoBuds S ($180), which feature Qualcomm’s Snapdragon chip, and to Jabra Elite 7 Pro ($199) — two well-equipped and well-reviewed sets of buds. The Elite 7s are a favorite of mine. I tried them all paired with my iPhone 13 Pro and Apple Music.

I would say all are good, but AirPods Pro 2 won. Whether that’s due mainly to benefits of the Apple ecosystem or a true sonic superiority is hard to say. In fact, I can’t say what would’ve happened using an Android phone as a sound source because I don’t currently have one.

The AirPods Pro 2 put across great presence, with lush and articulate sound across frequencies. You get a fat midrange, more than adequate bass and clarity in the high ranges. They didn’t outdo the Jabra buds by much, though, and I prefer the Elite 7 fit to that of AirPods Pro 2 and the Edifiers.

So at my desk or around the house I’ll be wearing AirPods Pro 2, but out and about I might choose other buds that feel secure and sound almost as good.

Also note that many earbuds offer a manual EQ and a choice of presets for sound preferences based on musical genre, voice, and bass and treble adjustment, which can be fun. Not Apple. But judging by the balanced, high-quality sound of AirPods Pro 2, I doubt I’d improve anything by fiddling around with settings. They are really only there to give me a sense of control.

As with many buds, you get noise-canceling mode, Transparency mode to let in sound to keep you aware of your surroundings, and “off,” with just the seal canceling some ambient sound. New to AirPods Pro 2 is Adaptive Transparency, which ups the noise cancellation when loud sounds arise, like sirens.

Obviously, noise cancellation cancels the most sound. It can easily blot out an annoying TV or voices in the next room. ANC turned off blocks a bit of sound just because your ear is plugged, and Transparency lets the most through, to help keep you from bumbling onto an active runway where a jet is landing.

I’d be more impressed with the noise cancellation had I not recently reviewed Soundcore’s Space Q45 headphones ($149) and Space A40 wireless ANC earbuds ($99). Now that’s next-level noise cancellation. Even all the wailing babies on that airliner about to run you over in the previous paragraph would have a tough time getting through.

Another of the many changes with AirPods Pro since 2019 is that you can now power up the case with an Apple Watch charger in addition to USB cable and MagSafe or wireless Qi charging.

With ANC enabled, you get six hours of battery life, Apple said, or 5.5 hours if you use head-tracking spatial audio. My usage roughly tracked with that. After an hour and 5 minutes of use with everything turned on, I saw the earbuds drop from 100% to 85%, then to 66% after another 65 minutes.

Talk time on calls is estimated at 4.5 hours. Factor in the charged case, and you get about 30 hours of overall listening time — a six-hour increase over the original AirPods Pro.

But is that great battery life? No, not compared to some recent releases. The Anker Space A40 earbuds I mentioned above, for example, boast 50 hours (and those very good earbuds are $99).

AirPods Pro 2 cost $249 at Apple — the same price tag on new AirPods Pro in 2019. They currently go for $239.99 at Amazon. The second generation AirPods Pro, with all its internal improvements, is a fine upgrade for Apple fans and a great choice for most people.

Where to buy: Amazon or Apple

See our reviews policy, and check out more in-depth reviews of Apple-related items.