I predict Steve Jobs will introduce a multitouch mousepad at WWDC tomorrow morning — and that finger input will be one of the “top secret” features of Leopard.

The multitouch pad will look like a standard mousepad, but it’ll be finger sensitive, like the touchpads on most notebooks. But instead of one finger, it’ll be sensitive to multi-finger gestures and commands, like the iPhone.

The pad will completely replace the mouse, allowing users to control the Mac with their fingers — moving the cursor, selecting files and double clicking with a quick double tap of the index finger.

The pad will also respond to a whole new vocabulary of gestures, like Mouse Gestures in Firefox, which execute common commands (backwards, forwards, reload) with a sweep of the mouse. Using your fingers, you’ll open files by twisting to the left, as though turning an imaginary dial. Twist your fingers to the right to close the file.

The pad will be USB powered, and will have “soft buttons” for common commands like cut and paste, and delete.

Jobs will unveil multitouch at WWDC to give Mac programmers time to incorporate gesture commands into their software before Leopard’s release in October.

Of course, this is pure speculation. I’ve no evidence whatsoever this is going to happen. I’ve no idea if it’s even realistic. Can developers incorporate an entirely new UI into their software in a few months? Will people even want it? Don’t forget, the QWERTY keyboard is still around. People don’t like whacky new interfaces.

Still, Jobs made a big deal of the multitouch finger interface of the iPhone, proclaiming it the third great “revolutionary” interface after the mouse and the scroll wheel. It seems natural we should be using our fingers to interact with computers.

Others are doing it. Microsoft has it’s Surface table, and I saw a new HP TouchSmart PC at the weekend, which is controlled by a large touch screen. A woman was playing Solitaire on the screen with her fingers, and it worked really well. I was quite impressed. 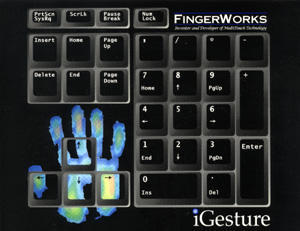 Apple is already making moves towards gesture interfaces. The touchpads on MacBooks support two finger scrolling. And there’s the iPhone.

Part of the iPhone’s multitouch interface is based on the work of two University of Delaware professors, John Elias and Wayne Westerman. Elias and Westerman owned a company called FingerWorks that sold a multitouch Touchstream keyboard and an iGesture Numeric Keypad, which worked like the multitouch mousepad described above.

Apple bought FingerWorks in early 2005, along with the professors’ patents, which look like an entire platform for finger-based interfaces.
For one thing, using your finger seems to help with RSI, according to FingerWorks’ testimonials:

“I’ve been a LP user for about 8 months. It’s been the best thing that’s ever happened to me in the world of computers. I’m a mechanical engineer and I use it for 2D and 3D CAD drafting, as well as ‘normal’ office type use. Also, I’m a Linux and Windows user, and I love how it works easily in both environments.

I have RSI in both my left and right forearms and wrists. Since using the Touchstream, I’ve reduced pain considerably, and I am able to do work with much less pain.”