In the last of our stories from owners of original and classic era Macs, we talk to Nigel Curson. His Mac Plus has seen action as a desktop publishing workhorse, early internet client, and now toy for kids. And it’s still going strong.

How did this Plus come into your possession, Nigel?

“If you don’t count my Sinclair ZX81 and Spectrum, it was my first home computer. I bought it in September 1988 just as I was about to leave a not-very-exciting computing job at Queen Mary College London. The Computer Centre at the time supported a range of mainframes, minis, a network of BBC B computers and quite a few Macs (PCs were actually quite thin on the ground).

“I headed off, among other things, to work on a magazine about comics called Speakeasy (which I subsequently edited) so I needed a computer – and was by then a Mac convert. Including the external 40Mb hard disk it cost me around £1500.”

What did it get used for, and replaced by?

“Originally mostly for word processing, and a bit of DTP (if you haven’t tried to lay out an A4 double-page spread in PageMaker on one of those diddy screens, you haven’t lived). I eventually became editor of Speakeasy and then did a lot of writing/copy editing on it (although I had a niftier machine in my office at work). Also a bit of gaming.

“Around 1993/94 I actually got it online, using a 14400 US Robotics modem and Demon’s fledgling dial-up service. Mostly e-mail and gopher.

“There was a Web browser that worked on the Mac Plus but only for text as the system was incapable of displaying GIFs and JPEGs. Replaced it in 1995 with a Performa 5200, followed by a graphite iMac in 2000 followed by etc … have never yet got rid of any of the old systems. My kids have the Performa and iMac in their rooms and we have more modern systems elsewere in the house.” 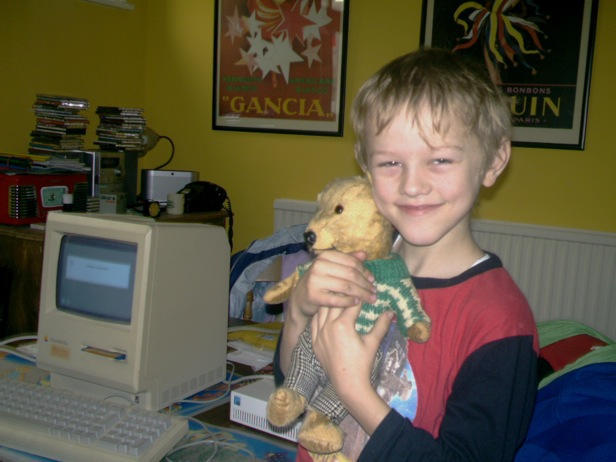 So these days, it’s mostly used for games?

“Around 1993 the hard drive started playing up so I replaced it with a 200Mb external drive.

“There were a variety of games on the machine so I thought my son might have fun with it. We had moved from London to Norwich in 1997 and the Plus had been sitting patiently in the cupboard for over a decade, but last year I got it out, fired it up and everything worked, so my son Jack had an entertaining game of Shufflepuck Cafe.

“Every now and then we pull it out for games. It does have the original Star Wars arcade game on it but I can’t get this to run – I upgraded the OS to System 7 at one point and I think SW will only run on System 6 or earlier.”

Thanks, Nigel, for an excellent tale of Mac ownership, and for your photos. Oh, and hi Jack! Look at you, you’re on Cult of Mac!