UPDATE: TechCrunch is quite vociferously denying any hanky-panky in this affair. “Hey Cult Of Mac, We Didn’t Photoshop That Deleted Verizon iPhone Tweet,” they say in a new post. TechCrunch notes the original Tweet is still in Google search and that they weren’t the first or only outlet to notice. See here. With apologies for jumping the gun on a bit of a slow news day, we also note TC is likely right that “somebody at Verizon panicked.”

Given the standard pandemonium in Apple-oriented corners of the Internet whenever a special “invite-only press event” is scheduled that might have something to do with the Cupertino company’s products or personnel, it stands to reason a Verizon employee’s tweet from an iPhone on the cellular carrier’s official Twitter account days before the entire tech world expects Verizon to announce it is finally going to start selling iPhones might be seen as a newsworthy event.

But could it also be an opportunity for one of the most widely followed tech blogs on the net to indulge in a bit of traffic-ramping scammery?

Monday morning the image above was posted to TechCrunch for all the people “grasping at any signs of their iPhone dreams coming true.” But a search of the official Verizon Twitter feed only came up with the following two images, neither of which quite conforms to the style or content of the image posted by Tech Crunch. 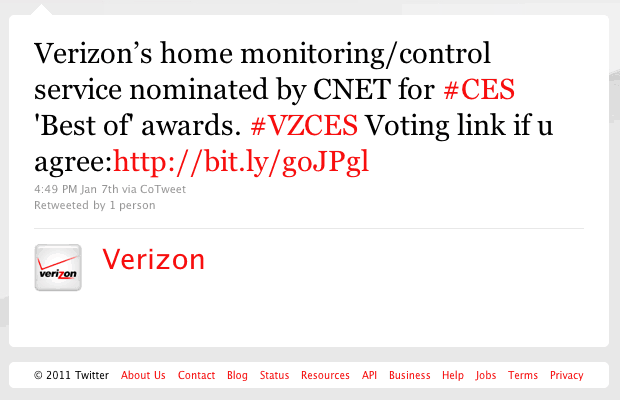 Nothing at all in Verizon’s Jan 8 feed mentioning the exact same tweet language, hashtags and bit.ly link contained in the image posted by Tech Crunch.

Did Verizon take down the Jan 8 iPhone tweet after Tech Crunch posted it up? Did artists in the Tech Crunch back rooms work a little Photoshop magic to draw some eyeballs?