LAS VEGAS, CES 2011 — One of the interesting things about the iPad is its influence on some new Windows PCs.

During Microsoft CEO Steve Balmer’s keynote, for example, a couple of interesting tablet/PC hybrids were shown off that showed the influence of Apple’s iPad, but weren’t shameless rip-offs of the device.

The coolest was a double screen PC from ASUS that featured a touch-sensitive screen where the keyboard should be.


The PC was able to scroll a page up and down both screens, from the lower screen to the upper screen and back again.

And when ten fingers were touched to the horizontal screen, it turned into a touch keyboard. Very cool. It’s reminiscent of Microsoft’s cancelled Courier tablet and an OLPC XO-2 design concept that made the rounds a few years ago (and I personally was hoping would be Apple’s then-secret “Brick project). 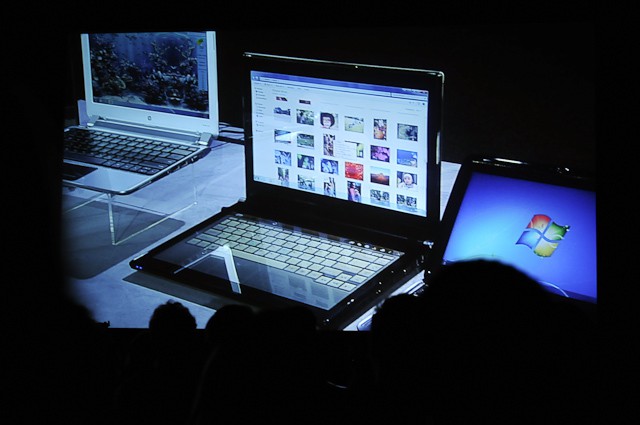 Also demonstrated was a Samsung tablet that converted from a laptop into a tablet like a big slider phone. When the keyboard is out and the screen up, the screen tilts backwards and forwards like a traditional laptop. But when the device is flattened out, the keyboard slides behind the screen and it converts into a touchscreen tablet.

Both were pretty cool new form factors — and not something that was obviously copied from Apple (unlike many other products here). Rather, the influence was derivative, and far more creative.

The keynote also featured a new version of Microsoft’s Surface tabletop that is now only 4-inches thick. Instead of using cameras mounted below the screen, Microsoft has developed Pixel Sense, an IR sensor system that turns every pixel of the screen into a camera. As well as being very responsive, the screen is able to recognize images: from barcodes to text.

“Only the imagination limits what you can do with a PC today,” said “Balmer. “I can’t tell you how excited I am personally about some of the new form factors.”