There are some great iPad apps out there (Evernote is one of my personal favorites). The tablet form factor and the touch screen make for some incredible mobile computing experiences.

But – as Poison said – every rose has its thorn. For every Star Walk, there is a box of virtual chocolates. For every Marvel Reader there is an iFart.

One would think that app developers would always strive for excellence and innovation in their work. Sadly, this is not always the case. One would further think that market forces, evolutionary pressures and/or iTunes executives would remove all terrible apps from the Apple App store. This, also sadly, is not the case.

Apple may not have invented touch screen computing, but they popularized it- first with the iPhone and later with the iPad. The multitouch gestures are intuitive and elegant, much like Apple products.

If your aim is to create digital offal, go ahead and ignore dynamic user interfaces that don’t take advantage of these immersive controls. Keep everything static and tell your designer to imagine an old lady with a mouse as your ideal user persona.

Here is a video showing what not to do:

9 – Clutter Your App With Trendy Crap

Why would you ever want to deliver an app that only does one or two things really well? In order to make a terrible app, be sure to clutter it with so much crap that users come away from the experience confused, angered and annoyed.

Sure, your app is about comparing pet food prices in real time. But comparison shopping can’t be the only thing your app does. Why not incorporate your company blog into the app? And also the FAQ page. Add a twitter button. Can’t have enough twitter these days. And finally put in a calendar and robust messaging system to help users “FlashMob” Petco.

Put your app into an underground bunker and lock it in there like a pallet of canned meat. Bonus points if you have no marketing or PR budget at all.

Is it secret? Is it safe? Perfect.

In order to make a truly reprehensible iPad app, you should charge people money for information they can access elsewhere for free.

Nothing wrong with this picture.

Swipes. Pinch and Zoom. Thanks to the iPhone and iPad, we all know what these things mean. Or do we?

The most ornery apps repurpose those controls with terrible results. Like it or not, pinch is an established zoom gesture and swipe means swipe. Alter these learned motions and you have the makings of a really bad iPad app.

What’s that? iFart is the #1 app of all time? Well then, time to prove Mr. Barnum right and race straight for the bottom of consumer tech culture. 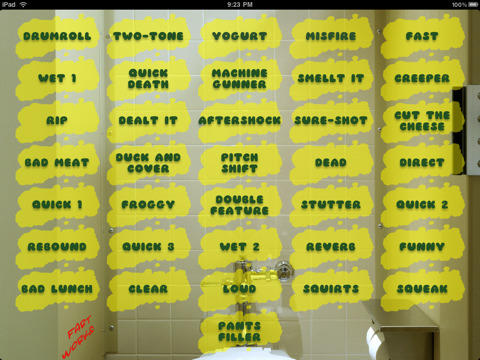 If you really want to make a bad iPad Application, go ahead and dial up the unsavory factor all the way to 11.

Your iPad app will be really bad if you imagine that the Apple tablet is just an iPhone with a bigger screen. Of course, that’s not what the iPad is at all. It has it’s own design sensibilities and user expectations. But if your goal is an awful app, go ahead and super size your iPhone app.

In order to make a bad iPad app, ignore all solid usability literature, and leave your users alone to fend for themselves. For example, if your app features some clever two finger swirl to control it, never remind your users what it means. Similarly, b sure that help and support are buried or nonexistent.

Identify an established app and make a rushed, terrible copy of it.

Don’t innovate. Only imitate. Bonus points if you can incorporate other tips from this list into your copycat app.

We don’t know how this happens, but there are a few special apps that lock up and crash your iPad (see my comment pictured here).

If you want to be the worst of the worst, make sure that you give users a hard restart when they launch your app.

What are your thoughts here? Tell us your suggestions for making the worst iPad apps in the comments below.