Apple has released another software update for the new 11 and 13-inch MacBook Air models. This update, which is an EFI firmware upgrade, follows the previous update released shortly after the new MacBook Air went on sale and other alleged fixes in Mac OS X 10.6.5.

According to Apple, “This update resolves a rare issue where MacBook Air boots or wakes to a black screen or becomes unresponsive. This update is recommended for all 11-inch and 13-inch MacBook Air (late 2010) models. ”

Apple goes on to say, “The MacBook Air EFI Update will update the EFI firmware on your notebook computer. Your computer’s power cord must be connected and plugged into a working power source. When your MacBook Air restarts, a gray screen will appear with a status bar to indicate the progress of the update. It will take several minutes for the update to complete. Do not disturb or shut off the power on your MacBook Air during this update. ” 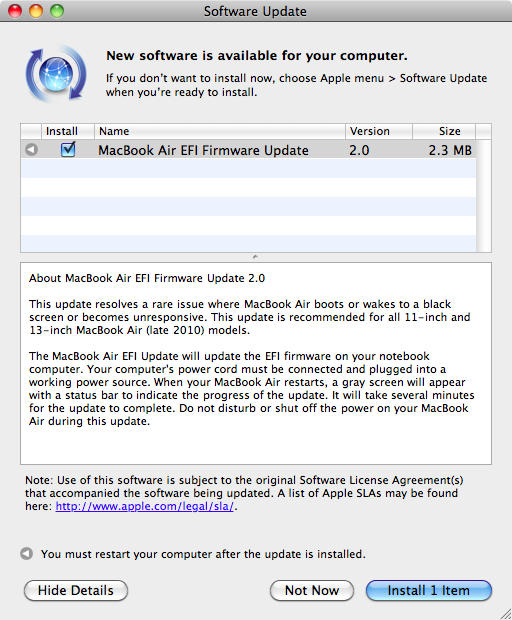 It remains to be seen if this firmware update will resolve any other problems, but according to Apple it will at least resolve some of the ones we’ve heard about. Although it doesn’t say anything about the flickering video issue it might resolve that too.

Please let us know how this update works out for you by leaving a comment.