The iPad is eating into the Kindle’s market, prompting analysts Tuesday to announce the Amazon e-reader has a “rapidly diminishing lead” over the Apple tablet. The iPad’s e-reader market share doubled between August and November, while the Kindle’s 62 percent fell tpo 47 percent over the same time.

In a poll of consumers, ChangeWave found the iPad’s market share rose from 16 percent in August to 32 percent in November. At the same time, 75 percent of iPad owners said they are “very satisfied” with the tablet, versus 54 percent for the Kindle. 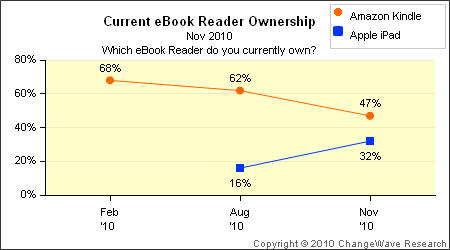 The iPad also edged-out the Kindle when ChangeWave asked consumers which e-reader they’d likely purchase in the next 90 days. Some 42 percent of the survey group intend to buy an iPad, compared to 33 percent for the Amazon device.

The findings come despite an aggressive campaign by Amazon to make consumers question the iPad’s suitability as an e-reading device. The online bookseller launched a series of television commercials poking fun at the iPad as favored by geeks while the Kindle was linked to bikini-clad beauties lounging by the pool. The campaign appears to have partial success. The Kindle is favored for eBooks, but the iPad leaves the Amazon device in the dust when it comes to reading newspapers, magazines and blogs.