Nearly 20 years ago Snagit was introduced for Windows and it has quite a following. It has always been very successful as a Windows utility so it’s odd that it has taken so long to come to the Mac, but it is here finally and worth the wait.

The release version of Snagit for Mac OS X, a screen capture and image-editing utility, is now shipping after spending a year in beta. It’s a bit expensive at $49.95, but I think it is worth the money especially after years of using it in a corporate environment along with a slew of co-workers. Now I’ll have access to it on both platforms.

However, although Snagit on the Mac features the core feature set of the Windows version, that many know and love,  it doesn’t have all the features of the award-winning Snagit 10 for Windows. Perhaps that’s why the Windows version is included for free. The serial number you purchase works on both platforms.

When you launch Snagit the first thing you notice about the application is that it is not very intrusive. It tucks itself into a small pop-out window on the right hand side of your Finder desktop. Hover the mouse pointer over it and it pops-out like a drawer opening. If you don’t like the default location you can drag it around the screen edge or just simply drag it away from the edge, drop it, and it becomes a floating palette of tools.

The Snagit window contains a plethora of tools that include activation of the All-In-One Capture, Window Capture, delayed captures from 1 to 10 seconds, or whether or not the Snagit editor launches after a capture or not. The keys that control a screen capture can be set here too and by default the key combination that performs a screen capture while Snagit is running is Shift+Control+C. You can change the key combination is you wish.

The simplicity of the small tool palette allows you to focus on the critical task at hand – screen captures. I liked that a lot.

The All-In-One screen capture is pretty nifty. Activate it and then if you click a Window a screen capture of that window is made. If you click and drag the mouse you’ll capture an outlined region of the screen that you select. Need to get more of the screen than you just selected? Simply move the mouse pointer outside the selected space and the region for the capture will expand to fit the entire desktop. A magnifier is shown amplifying the portion of the screen the mouse pointer is currently hovering over. The screen capture immediately appears in the image editor included with Snagit if that option is set. Don’t worry about loosing your image since it is automatically saved. 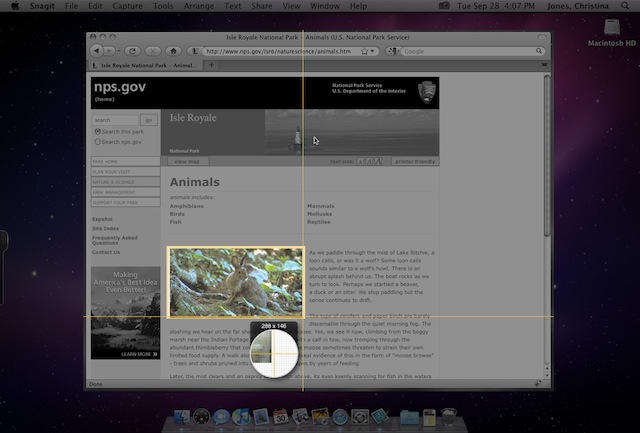 The Window Capture is a bit different since it focuses on open application windows by graying out the background. You can jump between different applications to capture their windows.

Time Delay captures simply capture the entire screen after a time delay of 1, 3, 5, or 10 seconds. A countdown appears in the lower-right portion of the Finder desktop. You would use this feature to capture things like contextual menus, regular application menus, or other things that disappear when the mouse pointer focus changes. 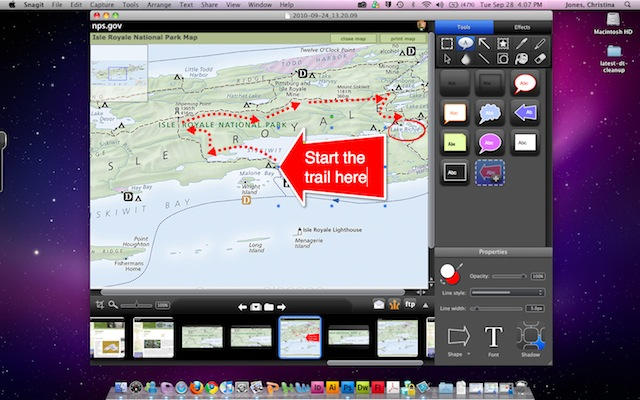 The effects you can apply include borders, shadows, edges, perspective, tilt, and reflection. You can annotate your image by adding text, cartoon bubbles, arrows, and other visual effects. One of my favorites is the blur tool – it is perfect for hiding information in screen captures that don’t need to be shared with everyone (i.e. phone numbers, e-mail addresses, etc.).

The editor isn’t limited to editing its own captures. You can drag images into it from outside via drag-and-drop. Make your changes to the image and save it or cut and paste it into your favorite Mac applications.

Snagit allows you to share your creations from the image editor via e-mail, screencast.com, FTP, and cut and paste. I was a bit disappointed that in a world full of social sharing opportunities neither Facebook or Twitter were sharing options available in Snagit.

The current version of Snagit for Mac is lacking some features I’ve become used to using on the Windows version. Primarily, the Mac version lacks video capture, text capture, and it doesn’t support batch processing. I also noticed that it doesn’t have a Revert feature wherein the application will completely remove all edits and restore the image to its original state. I’d bet that these features will be added at a later date. I’m sure all the Switchers out there will appreciate a feature complete version of Snagit for their new Mac. I know I will on all my old Macs since I switched years ago at home.

Although Mac OS X includes its own screen capture short cuts and free tools (i.e. Grab and Preview) to perform basic image editing and annotation it still comes up short when compare to Snagit. After all these screen capture methods are pretty simple. Snagit ties it all together into one easy to use powerful capture and edit tool making it a worthy investment especially if you’ve used it as long as I have in Windows. So what are you waiting for go snag a copy for yourself.