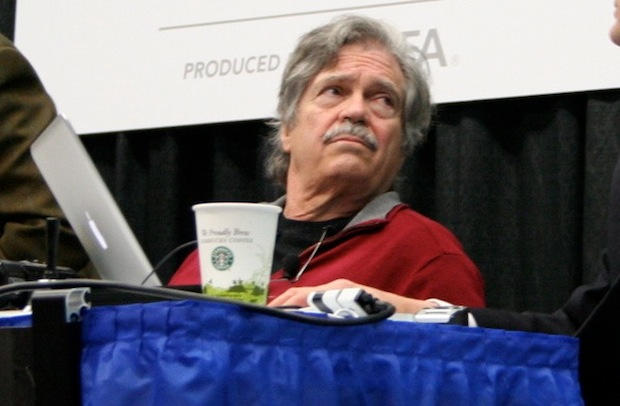 It’s Education Week on CultofMac.com. How’s Apple doing in schools these days? What are the best education apps? Is iTunes U worthwhile? Join us as we learn more about Apple in Education.

Computer scientist Alan Kay is one of the most foremost experts in computers in schools, and yet he believes technology in education has largely failed.

Kay is a pioneering computer scientist, a former Apple fellow, and famous for formulating the Dynabook concept that predicted laptops and tablets 40 years before they became commonplace. Kay was a researcher at Xerox PARC in the seventies on technologies that Apple later commercialized in the Lisa and Mac. Among many honors, Kay has won the prestigious Turing Award for work on object-oriented programming. During the mid-1980s he was an Apple Fellow at Apple’s Advanced Technology Group.

Computers have been in schools for the last 30 years, but with few exceptions, they haven’t been used to their full potential.

Kay says the education system has squandered 30 years of technology in classrooms. He likens the modern factory educatory system to a monkey with a microscope. The monkey looks at its reflection in the microscope’s barrel but doesn’t look through the eyepiece — it utterly misses the point.

Computers have become tools of distraction, Kay said, instead of education. He singles out Guitar Hero as the best example of this — players get the fantasy of virtuoso guitar playing without learning a single note.

“When I look at computers in schools, this is what I see. It’s all Guitar Hero,” he said during a keynote speech at CES earlier this year.

We asked Kay to expand on these ideas in this exclusive Q&A. Kay talks about the importance of using technology to create educated voters capable of participating in a democracy, and Apple’s general disinterest in education.

Why has technology in schools failed? Is it the technology, or the schools, or both?

The first idea is that pencils, paper, and especially printed books are technologies that can help real learning and real education. This is the “for most people ‘technology’ is only stuff that happened after they were born” idea.

So the first question you should ask everyone is “has the high technology that qualitatively revolutionized the outlook and powers of Europe and America, especially starting in the 17th century, failed in today’s schools?” If so, why? And, what was so special about this technology from 500 years ago? And writing from 5500 years ago, especially alphabetic writing from 2600 years ago, that first changed traditional thought to the lines and dimensions and pathways that led to today?

You could ask “what percentage of American adults — or K-12 teachers — actually understand what the book, reading and writing did, and why it worked (hint: it’s not primarily about distributing information).

Some schools still know how to make the book, reading, and writing work for real education. And a few schools have learned how to use computers for what they are really good for.

Two keys to the first are (a) how one can argue in a much richer “more reasonable” way with writing, (b) how your brain must change in order to become a fluent reader. Anthropology has shown that literate cultures reason qualitatively differently than oral cultures (i.e. a literate culture is not “an oral culture with a writing system”).

Keys to the second include (a) above: a computer allows one to reason and argue in a qualitatively stronger way then what reading and writing does — this is because simulations of complex ideas can (1) capture more of the idea, and (2) can allow the idea to be tested and modified in more ways, and (3) the practical range of the ideas that can be considered is larger and more important.

Another way to look at the current failure is that it took about 150 years of the printing press before more than a few started to see what it really was about (most of these were not born when the printing press was invented). The few that could see 100 years earlier (like Erasmus) were essentially trying to point out images to blind people.

However, it is not a necessary thing that people will eventually come to use the computer as a real intellectual amplifier and world changer. This is because the level of distraction is much great (including a torrent of non-important but glittery stuff that can be made on computers). Americans were not able to get any perspective on television that would allow them to resist it, and this seems similar for consumer computer technology. One way to look at this is that consumer companies are essentially looking for “the next legal drug”, and the computer can serve that purpose also.

How important is it to get education in schools right?

Americans generally think it is about jobs, but it’s main purpose is to create a voting public who are sophisticated enough to sustain a democratic republic, where the “ultimate powers of the society” are placed in their hands. I think it is safe to say that this has essentially failed in our day and age.

Do you see any hope in devices like the iPad, or will the same failures be repeated?

Devices can be important, but it’s the context of the services the devices are make to deliver than is most critical. This is why the iPad is not a Dynabook.

I’m interested in Apple’s role of course. How would you grade Apple’s performance in education?

Apple used to be very interested in education 30 years ago. They weren’t interested when I left in 1996, and I don’t have enough context and information to judge where they are today. I believe it’s the case that they have not funded anyone in “computers and education” that I consider good for many years.

You’ve talked about putting Socrates in a machine — but the machine has to be able to evaluate the student’s own mental models. Is such a system currently possible? Are there any working examples (commercial, research or otherwise)?

I don’t think that I have put it as “Socrates in a computer”. First we have to realize that enough of Socrates could be put in books to influence 2500 years of Western thought. An important idea that “enough of a great thinker/teacher in media” allows more ordinary people to serve as teachers and mentors. We could readily imagine making a computer system that could help learners even more than a well written book, and do it in many ways. Before going to the next step with Socrates, we should be able to imagine putting “a lot of Seymour Papert” in a computer. The subject matter here is also very important, and is much easier to represent well for helping children learn it.

This should be a “national grand challenge” for the next 10-15 years, and President Obama has called for just that in his speech to the National Academies last April 2009, as we need to invent and build and deploy “learning software as effective as a personal tutor”.

One of many things about media design (where x ranges from from art, theater, writing, teaching, to interactive computer interfaces) that most people don’t understand, is that the main purpose of “great x” is to act as a kind of “magic mirror” which reflects the beholders own intelligence back out at them so they both “remember things they have forgotten”, and that one of these things is that they can learn how to think and learn.