In this Monday night CBS sitcom about what happens when a pair of physics geeks meet the beauty next door, Apple products crop up first, as far as I can tell, for use by the distressed.

In the third episode of the first season (Big Bang is now in its second season) roommates Leonard and Sheldon are playing a MMORPG with friends. Though all the computers are covered with stickers, it looks like the only Mac user is Raj, another university researcher who is so flustered by Penny, the blond neighbor, that he is always mute in her presence. 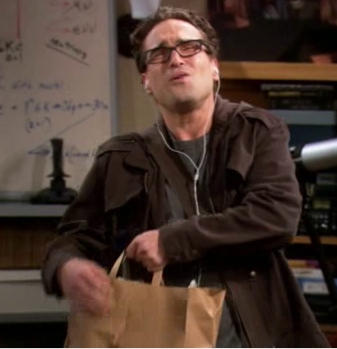 An iPod is seen (at least the earbuds) later in the same show, when Leonard is so upset over Penny that he’s listening to music that his roomate says is a perfect for a double suicide.

Big Bang Theory is pretty entertaining (centripetal force party tricks, anyone?) although the gags sometimes hark back to when geeks were still just nerds without the earning power to get real revenge, at least in the early episodes.