Obihai Technology, a tiny Cupertino start-up, this month brought to market its first product, the OBi110 — an unassuming $70 box with blinky lights that may well prove to be the most disruptive telephony device to come along in a decade.

The OBi110 is the physical hub in a multi-layered communications model the company believes can revolutionize the way consumers use their mobile, Internet and fixed-line telephony services, bringing emerging social networking behaviors together with maturing Voice over IP (VoIP) technology to create total communication freedom at the personal level.

With web and mobile-based software products, including an iPhone app presently in Beta testing, Obihai is poised to show the millions of consumers who’ve bought magicJacks and all 237 of them who’ve bought an Ooma just how IP telephony can be done.

Obihai’s founder and CEO Jan Fandrianto invented the analog telephone adapter at Komodo Technology in the late 1990s, making IP telephony using standard telephones without computers possible for the first time. His original design was bought by Cisco and became the device with which Vonage popularized home VoIP service in the early 2000s.

From there, Fandrianto went on to form Sipura Technology, building on Komodo’s ATA186 foundation to offer even more service and flexibility using inexpensive, small-form packages — always with the idea of leveraging the power of IP telephony without requiring the use of a personal computer.

Sipura was eventually acquired by Cisco subsidiary Linksys and Fandrianto’s technology became the underlying basis for a whole range of small-business digital and IP telephony products and systems for both Linksys and Cisco. Now Fandrianto and the same core engineering team that’s been with him since Komodo is back at the start-up drawing board and their OBi-plan seems to have real promise. 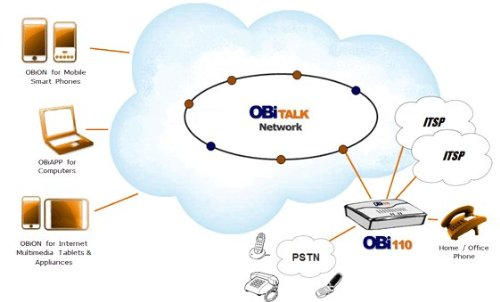 Through Obihai’s web-based interface, OBiTALK, users manage their network of connections, or Circle of Trust in the company’s lingo, and anyone with the right credentials can access all of the OBi110’s calling features just by calling the number associated with the OBi110.

Calls between OBi110 devices are always completely free and never require the intervention of a computer, although the company also has PC software called OBiAPP (currently available only for Windows, with a Mac Beta due in 60 – 90 days), that supports calling from popular softphones such as Counterpath’s X-Lite.

Calls made anywhere in the world through the OBi110 using a VoIP service or Internet Telephony Service Provider can be made at a fraction of the cost of traditional landline providers and the company’s in-Beta iPhone app, OBiON, brings all of OBiTALK’s features and flexibility to Apple’s mobile devices.

“It’s like owning your own phone company,” said Fandrianto. “The OBi110, coupled with OBiTALK and VoIP or PSTN services gives people power and flexibility never seen before in the consumer market.”

The OBi110 is currently available at Amazon and 888VoIPStore for $69.95 and comes with everything needed to get started except an analog phone.

Sign up for OBiTALK and begin building a Circle of Trust at the OBiTALK website, and stay tuned here for an in-depth review of the OBi100, OBiTALK and OBiON mobile app software in the coming weeks.