One thing that you tend to notice when you watch as much television as I do is that almost ever character on TV uses a Mac … usually with a big sticker conspicuously placed over the glowing emblem on the lid, because while writers and set designers want to show that their characters are cool enough to use a Mac or an iPhone, Apple doesn’t go in for product placement on shows it doesn’t like.

When they do sponsor, it always smacks of love: Consider critic’s darling 30 Rock and their proudly prominent “Sponsored by Apple” product placement … all despite the fact that the shows ratings have been in the toilet for seasons now. Steve Jobs grooves on some Liz Lemon.

The episode defies belief. The action kicks off with Ted — who, as mentioned, has always been a sticker-on-a-MacBook kind of guy — pulling out a conspicuously Windows-branded laptop, even though no such laptop exists in the real world and he’s never used Windows in the history of the series.

Why? He wants to check Bing … a search service practically no one uses in the real world.

By the end of the episode, though, everything’s devolved into the surreal, as a man dressed as an anthropomorphic Windows Phone 7 handset prances around behind Maury Povich, who is juggling an Xbox 360 and its still-unreleased motion control accessory, the Kinect. 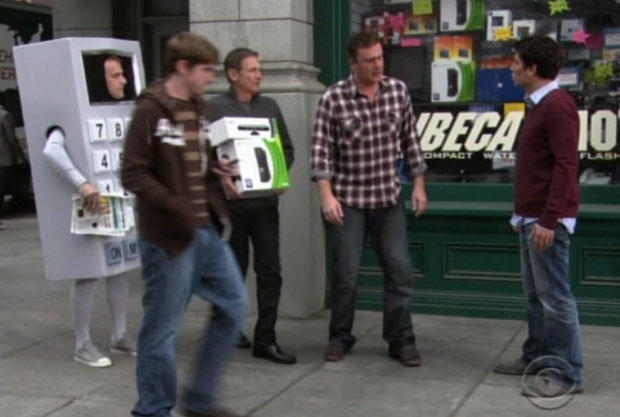 I’ll admit, How I Met Your Mother is a very guilty pleasure for me. I still think it’s interesting, though, that the sort of comedy that Apple would choose to work with to advertise its brand (30 Rock) would never agree to this sort of whoring out in the first place, despite its more perilous standing in the rankings.

I can’t say I’m surprised that How I Met Your Mother sunk so low, though. What can you really say about a show that has gone six years without even beginning to address the title’s premise, or so one-dimensional that even the show’s star is openly expressing disgust with its writers in GQ.

Posted in: News Tagged: 30 Rock, How I Met Your Mother, Microsoft, product placement